Why does Vader live on Mustafar?

In Rogue One, we get our first glimpse of Darth Vader's primary residence - a castle on Mustafar. Given the freedom to choose any planet in the galaxy as their new home, I don't think many people would pick the place where they had three limbs chopped off, fell into a lava flow, and were burned alive, but this appears to be what Vader did. 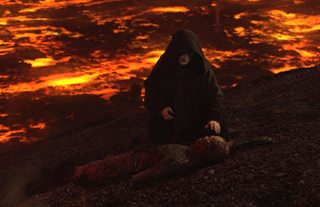 Why does Vader live on Mustafar of all places?

Because Palpatine made him

From the Rogue One Ultimate Visual Guide:

Vader's personal abode is an obsidian tower on an inhospitable world. It is by the Emperor's design that Vader lives in such an unforgiving environment.

It is not hard to guess why Palpatine would want this, either: keeping Vader there will keep him angry and suffering, a sure path to power in the dark side of the Force.

Because it has special meaning

According to an interview with Lucasfilm VP Doug Chiang:

Doug Chiang: [Laughs] Vader’s castle was really fun. When I knew that we were going to possibly go back to Vader’s castle, I loved that idea of, “Okay, lets establish Vader’s home.” The initial idea was, “Why would Vader live here?” In our minds, we started to come up with a little bit of a backstory. That perhaps this place had special meaning for him, and that this is where he comes to meditate and to heal himself. We started with the idea that maybe it should be built around his bacta tank chamber, and he comes back here to rejuvenate himself and also to meditate. So from there, the structure itself grew out from the bacta tank, and there were certain ideas that we tried. We were trying to go for a very iconic shape, and we always love tall towers. Ralph McQuarrie actually drew quite a few small thumbnail sketches [of Vader’s castle] that were very intriguing. They were kind of angular versions of a tower, and I saw the potential of where he was going, and I just exaggerated that quite a bit.

One of the things we landed on early was this idea of a tuning fork — a twin tower kind of look. And it was really interesting, because then that started to give Gareth a lot of ideas like, “Well, maybe the structure is built this way because it is like a tuning fork. It’s tuning the dark side in terms of the energy.”

Again, Vader is a Sith. Reminding himself of his suffering is a path to strength. In addition, it is possible that Mustafar is a particularly good place for "tuning the dark side."

This is just my interpretation - but in addition to the other answers (that it is a place where he can immerse himself in suffering and hate/Palpatine made him live there) and the fact that it provides a very good visual representation of Vader's mindstate/ties Rogue One in with ROTS - it is also the place that he last saw Padme. He thinks this is the place where he killed her, so in a way staying there would not only enable him to tap into his pain, but would also be a way of staying close to the memory of the last time he saw the love of his life alive.

Not the answer you're looking for? Browse other questions tagged star-wars darth-vader rogue-one or ask your own question.

70
Why did Obi-Wan leave Vader on Mustafar?
43
Why was Darth Vader called Lord Vader?
15
Is there any indication that Vader/Anakin would have been redeemable on Mustafar?
25
When did Emperor Palpatine first reveal the post-Mustafar Darth Vader?
30
Does this cut material from Rogue One still appear in the novelisation?
33
Why was Vader accompanied by the Imperial Royal Guard on Mustafar?
27
Why didn't Vader Force Pull the Death Star plans into his hand on the Rebel flagship?
17
Does Darth Vader ever run?
2
Why is Mustafar different in Rogue One?