What is the name of the track that plays before the Geth Armature fight on Therum?

The other night my friend was having me listen to samples from the Mass Effect soundtrack(s) (she said there was more then 1 for the first game) that she was going to get me, making sure that I actually did want them.

While the samples had music I've wanted to listen to for a while, one track seemed to be elusive and that was the background music that plays on Therum between when you have to get out of the Mako and proceed on foot (where you have that small gap in the rock) and the Geth Armature.

She had me listen to 2 soundtracks and given the soundtrack grouping she's said it's odd it's not in there. One soundtrack listed the following:

While another listed them as:

In both Liara's World, sounded like the music that plays when you're in the Mako heading to the ruins where Liara should be, while A Very Dangerous Place sound like the battle with the Geth Armature. It could be in another track, but I haven't recognized it from the samples

So what is the name of the track that plays before the Geth Armature fight on Therum?

It doesn't have a useful name

As you note, this track has not been released to the public. The first track listing you provide is from the retail OST: 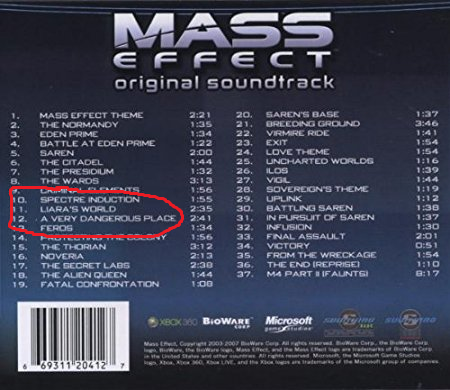 But this is far from a complete soundtrack, and omits many tracks from many locations (the Flux nightclub music springs to mind most immediately).

The second track listing, I believe, comes from the so-called "Mass Effect Expanded Soundtrack", from khinsider.com. This listing includes many tracks not on the official release1 and, while it doesn't actually include this exact track, it has something similar in track 29, "Knossos"; that one appears to be a medley of four very similar tracks from the game files. The bit most similar to what you're looking for comes at the end of that track, but isn't quite the same.

The closest thing to an official name is the track's filename, mus_area_knossos_v2_1_jack (Knossos being the name of the star system containing Therum; I believe "jack" is a reference to Jack Wall, the game's composer); not exactly a catchy title.

Several people have taken the audio files directly from the game and uploaded them to YouTube (and other places, I'm sure); they typically call it some variation of "Therum Battle" or "Therum Theme". For example:

I'm not exactly willing to re-play the game myself to verify that this is the correct track, but YouTube Let's Play videos can do it for me; consider this one, for example, where you can hear the track start to come in at about 30:13:

So that's as close as you're going to get to anything useful.

1 Since this is a fansite (actually a Kingdom Hearts fansite, albeit one with an extensive video game music library attached), it's likely that these are ripped from the game files. I can't begin to speculate on why only these tracks were ripped, or where the names came from

Not the answer you're looking for? Browse other questions tagged music mass-effect music-identification or ask your own question.

9
What is Heterodyning?
2
What track plays in the background of Mark Wahlberg’s introduction in Transformers 4?
16
What is the name of the piano piece Seven of Nine plays?
6
Why didn't the Council attack the geth immediately?
7
Why do the geth use standard drones to control fighters?
6
What is the name of the song that plays during the attack on the Jedi Temple?
4
What's the go-go track in “Our Man Bashir”?
2
What is the track in the Logan (2017) trailer?
9
In TOS, what's the origin and name of the clarinet comedy sound effect found in “A Private Little War” and other episodes
3
What is the soundtrack that plays when Neo is kissing Trinity in The Matrix Reloaded?