In the 2005 film Chronicles of Narnia: The Lion, The Witch & The Wardrobe, there is an overhead shot of Aslan's army right before he comes out of his tent the first time. In that shot, there are several examples of what appear to be normal horses kneeling. However, there are no humans in Aslan's army - only centaurs, satyrs, fauns, and various woodland creatures.

Are these horses actually centaurs that were missed in post-production, or were there normal horses in Aslan's army? And if so, who used them as mounts (if anyone did)?

Here's the shot in question: 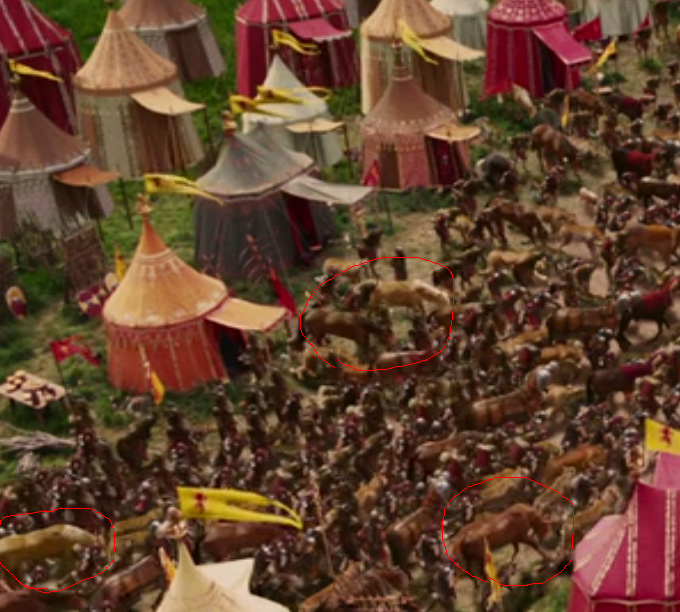 Quite possibly, as talking horses did exist.

A talking horse is one of the main characters in The Horse and his Boy (3rd chronological). But we also see a lot of horses in The Last Battle:

Boom-boom-ba-ba-boom went the horrible drum. Then another sound began to mix with it. "Listen!" said Jewel: and then "Look!" said Farsight. A moment later there was no doubt what it was. With a thunder of hoofs, with tossing heads, widened nostrils, and waving manes, over a score of Talking Horses of Narnia came charging up the hill. The gnawers and nibblers had done their work.
The Last Battle, chapter 11

So even though we have no proof, Talking Horses did exist, and they would probably fight on Aslan's side.

We also see in The Horse and His Boy that both types of horses are ridden while at war:

After that came the main body of the army: men on regular horses, men on Talking Horses (who didn't mind being ridden on proper occasions, such as when Narnia went to war),
The Horse and His Boy, chapter 12

Even if they were just horses without human body (centaurs), they were still intelligent, unlike regular Earth horses. But obviously these need not be credited since they didn't even have a voice role in the movie.

Remember that this was the golden age of Aslan's rule and not the Caspian time where some animals were dumb and only a few remember the old ways.

Well, they looked like normal horses, sure, but they were probably really Talking Horses of Narnia. It fits your Talking Animals criteria, yes? Because there were a few actually normal ones.
As a general rule, Talking Horses don't like to be ridden unless it is during war, but on exception is in The Horse and His Boy, in which Bree allows Shasta to ride him.

This is Bree letting Shasta ride.

“In other words," it continued, "you can't ride. That's a drawback. I'll have to teach you as we go along. If you can't ride, can you fall?" "I suppose anyone can fall," said Shasta. "I mean can you fall and get up again without crying and mount again and fall again and yet not be afraid of falling?”

Not the answer you're looking for? Browse other questions tagged character-identification the-chronicles-of-narnia or ask your own question.

33
If Peter, Susan, Edmund and Lucy were the only humans in Narnia, how did the human population emerge?
12
How did the Telmarines get to Narnia?
4
What is the time difference between Prince Caspian and The Dawn Treader?
13
How did Uncle Digory visit Narnia?
9
What happened to Father Christmas' gifts to the Pevensies?
16
Who charged down the pile of dead soldiers/horses in the Battle of Bastards?
98
Why was Susan treated so unkindly?
19
How did Susan forget about Narnia?
11
At what point did C. S. Lewis decide that humans were a normal part of Narnia's world?
36
How did Jadis, The White Witch, obtain the right to kill a traitor in Narnia?