How does He-Man turn back into Prince Adam?

We've all seen, once per episode, Prince Adam hold his sword in the air, shout

"By the power of Greyskull"

and he and his cat getting transformed into the hulking skeleton-fighting duo, "He-Man" and "Battle-Cat" in a spectacular lightning-filled ritual, which the cartoon makes quite a big deal about showing us.

But then in the epilogue, they are once again back as Adam and Cringer, (ready for the next episode I suppose) with no mention of how they turned back.

Did any episode ever reveal how this is done?

He says "Let the power return". There is a video available on Youtube.

This was also shown to be how he transformed back in the 2002 series, and in the comics. 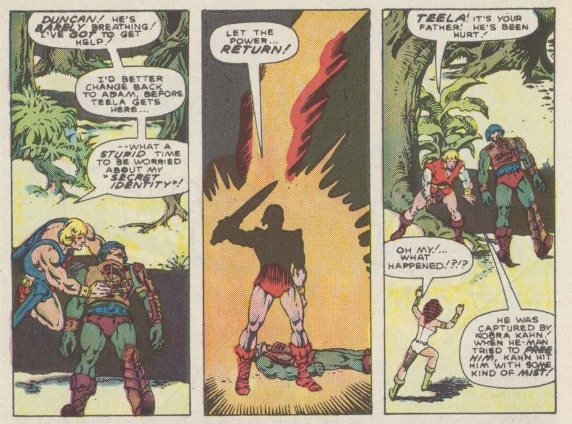 It should also be noted that instances of enough Raw energy or magical force being thrown at him directly have on rare occasion seemed to "knock" him out of his transformed state. This too can be seen in the 2002 series.

Go to 16:00 - 16:55 to see the full effect. Even the sorceress knows it can happen, as she yells out "He-Man, no! You must not challenge the power of the Stone!" So this would indicate there are some unforeseen magical conditions which can change him back without him willing it.

Another example of this would be in the 1980s cartoon, when he travels to Orko's dimension, Trolla, as He-Man, but is reverted back to Prince Adam as he steps out of the gate. He was unable to change back, even with the sword. After seeing Orko's magic work flawlessly and how the normal laws of physics seemed in opposition in that realm, it was later deduced by Cringer that "everything is backwards here!", so adam had to recite his incantation backwards in order to utilize his full powers.... though why that didn't make him the weakest man in the Universe is beyond me.

13
How did Skeletor lose to He-man when he had powers of the universe?
11
Does anyone know who created or where this He-Man and Battlecat image came from?
4
Does the new Netflix She-Ra recognize He-Man and Eternia at all?