What is the meaning of a safe hand?

In the Stormlight series by Brandon Sanderson the women have something known as a safe hand. Does the series ever explain? If it does please list the book first and anything in the first book behind spoiler cover.

If this isn't explained does it have roots in some tradition or any other meaning?

It hasn't been explained directly in the books yet, but Sanderson has said more will be revealed about the reasons behind it.

Basically, it's part of the culture and traditions of the world, similar to how some cultures on Earth have dress codes for certain people in their society.

In the world of the Stormlight Archive, according to Vorin cultural tradition, it is obscene for a woman to leave her safehand (their left hand) uncovered.

In an interview, Brandon Sanderson stated that the tradition derives in part from

This is the full quote from the Q & A:

My burning question for Brandon is did I miss the explanation, world building moment or historical gem that explains why women have a safe hand and why they must keep it covered?

No, you haven't missed it. People have asked about this. There will be more explanation in-world as it comes along, but it's for much the same reason that in some cultures in our world you don't show people the bottoms of your feet, and in other cultures showing the top of your head is offensive. It's part of what has grown out of the Vorin culture, and there are reasons for it. One of them has to do with a famous book written by an artist who claimed that true feminine pursuits and arts were those that could be performed with one hand, while masculine arts were those performed with two hands, in a way associating delicacy with women and brute force with men. Some people in Roshar disagree with this idea, but the custom has grown out of that foundational work on masculine and feminine arts. That's where that came from. One aspect of this is that women began to paint one-handed and do things one-handed in upper, higher society. You'll notice that the lower classes don't pay a lot of attention to it—they'll just wear a glove.

As a student of human nature and of anthropology, it fascinates me how some cultures create one thing as being taboo whereas in another culture, the same thing can be very much not taboo. It's just what we do as people.

There's more to it than that, but that will stand for now.

Brandon Sanderson just released one of the main reasons behind the tradition of covering safehands. 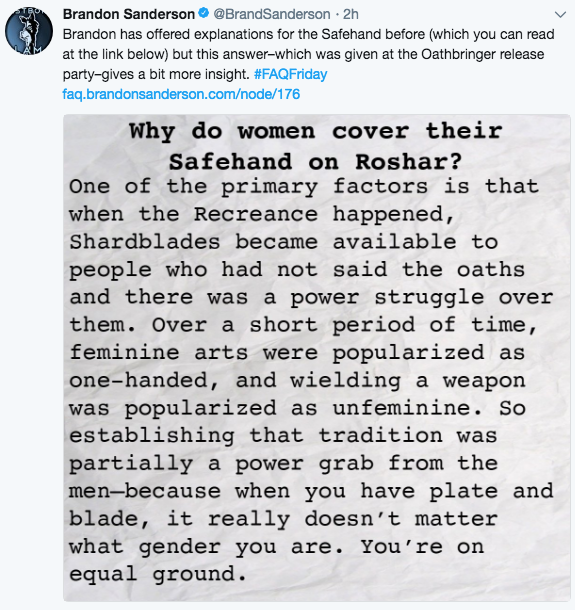 One of the primary factors is that when the Recreance happened, Shardblades became available to the people who had not said the oaths and there was a power struggle over them. Over a short period of time, feminine arts were popularized as one-handed, and wielding a weapons was popularized as unfeminine. So establishing that tradition was partially a power grab from the men - because when you have plate and blade, it doesn't really matter what gender you are. You're on equal ground.
Twitter

The link in the tweet goes his FAQ page here which is almost the same as the quote in Tim's answer.

Not the answer you're looking for? Browse other questions tagged cosmere stormlight-archive or ask your own question.

3
How does or doesn't the physics of Mistborn mesh with Newtonian physics?
16
What boon did Dalinar Kholin receive from the Nightwatcher when he pursued the old magic?
13
Is the Well of Ascension based on the Eye of the World?
4
Why is Kharbranth independent?
2
Where did the Alethi get new gems before the War?
8
What affects spren gender?
7
What happened at the beginning of the calendar?
7
What does “sample is considered questionable” mean?
4
What did Kaladin draw in Shallan's sketchbook in Oathbringer when in Shadesmar?