Why did early Iron Fist comics have second-person narration?

After I watched the Iron Fist series on Netflix, I checked out some of the early Iron Fist comics. One odd thing stood out to me right away: 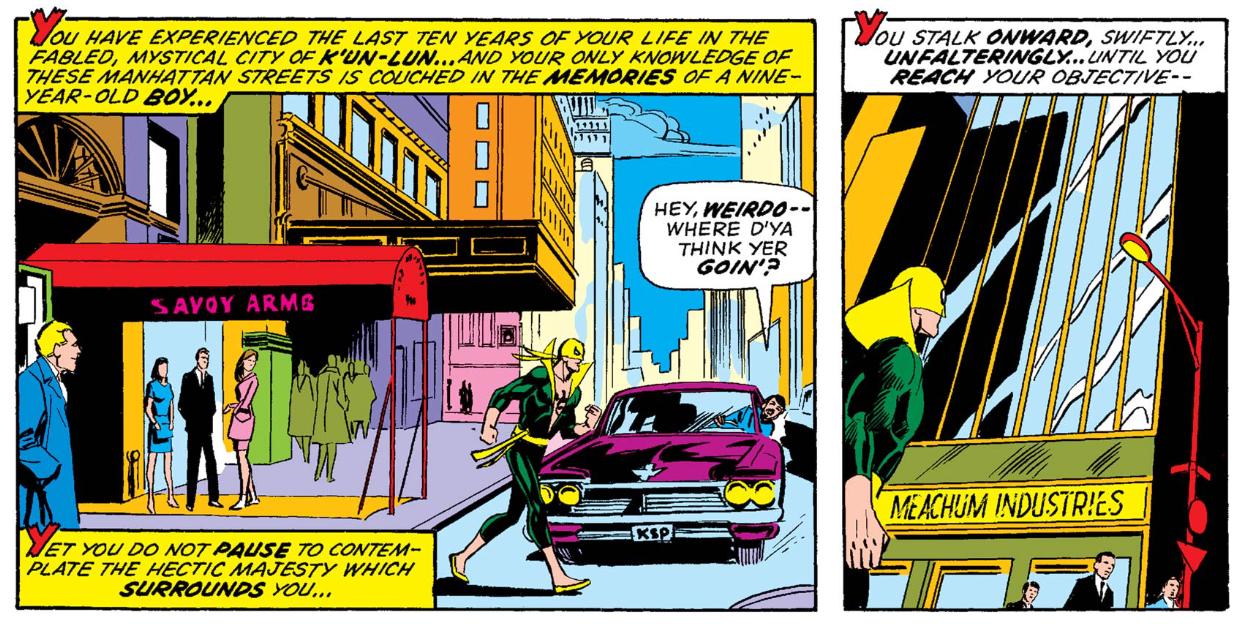 Instead of the usual first-person or third-person narration, the narration is in the second person: "You stalk onward, swiftly...unfalteringly...until you reach your objective--" This persists through the entire first Iron Fist storyline in Marvel Premiere issues 15-18

I don't have a lot of experience with older comics, having only really read a few issues of early Amazing Spider-Man and some of the early 70's X-Men, but none of the ones I've seen use second-person narration. Was this common at the time, or was it a quirk of certain writers, or just a weird random decision by the writer of Iron Fist?

I don't think IRON FIST was the only comic to try this, but it was by no means common. I personally think it served (at least) two purposes.

First, it provided a mechanism to reveal the character's backstory in a semi-natural way.

And, it helped differentiate it from Marvel's other "kung fu" books (most notably MASTER OF KUNG FU, where the lead character had more supporting cast to interact with, allowing exposition duties to be shared amongst that cast, and there being some excuse to go over such things). Danny's story did not necessarily lend itself to actual expositional dialogue.

Once established in the first story-arc, this continued through the original run of the series as part of its signature style.

Not the answer you're looking for? Browse other questions tagged marvel comics iron-fist or ask your own question.

18
Why did Captain America have a secret identity in the 1980s comics?
13
Why did Danny Rand (Iron Fist) pose as the Daredevil?
59
Did the writers of Wonder Woman have some kind of fetish for bondage, in the early comics?
1
Is 3000 a reference to Iron Man in the comics?
33
Why doesn't Iron Man's action affect this person in Endgame?
3
An Iron Fist villain from the 1970s (maybe still current) who wants to absorb/steal the power of the Iron fist technique?