Here's one for the trivia night for you:

I read these books back in the 80's (a novel with a sequel), which were probably from the 70's. The story opened with detectives investigating a murder where the victims were in a sex video where the killers morphed into werewolves and vampires before killing them. Very odd, semi-erotic novels by a well-known scifi author.

At the end of the sequel, the killers turned out to be aliens that were trying to get back home. Strange set of books, but driving me crazy trying to remember the titles.

I think you may be looking for Philip José Farmer's Image of the Beast and its sequel Blown, published in 1968 and 1976 respectively. Here's a review from the first book:

Harold Childe is a half breed, a human and a alien. Except he doesn't know this. A former cop turned P.I. is now on the case of who or what happened to his soon to be ex-business partner. After the delivery of a video tape showing his partner being murdered during sex that is a bit beyond S&M, Childe starts following his instinct and leads. Where it leads him is on to a path filled with sexual encounters with a band of aliens. After several graphically imaginative sexual situations Childe finds out his alien birth rite and not only solves the case but saves the day.

Or, from another review (mentioning more of the monsters):

Private Detective Herald Childe is called to Police Headquarters who have received a film in the post showing Matthew Colben (Childe’s partner) tied to a table being seduced, tortured and finally castrated by the bite of what appears to be a vampire.

The problem one has with the novel is that there is no real reason why the creatures Herald discovers should be so sexually obsessed. He is seduced by a snake-woman, a pig-woman and – for even less good reason – the resident ghost of Igescu’s mansion, Delores Del Osorgo. These bestial (and ectoplasmic) acts are described in interminable detail.

Philip José Farmer is definitely one of the well-known sci-fi authors of our time, so this fits too. The covers vary a lot, and a few push the rating level of the site, but here are two of the safer older ones: 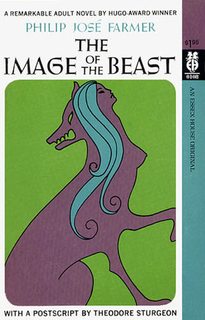 9
Series following a lone adventurer named Grey Wolf
4
Sci-fi series about a parallel world peopled by lizard men, the portal of which was discovered by an alcoholic in his apartment?
10
Book about a Druid with his bacon loving hound fighting gods from multiple pantheons
8
Name of a werewolf novel from the 80's
10
Story where father's books became reality
13
Science fiction novel with forced sex change
1
Novel with solar sail technology and gorilla-like aliens
3
1980s Science Fiction book with a manta-shaped ship, people who turn into animals and wind
19
Space vampires and bounty hunters