Why does Krennic land so far away from the Erso farm?

In the opening scene of Rogue One, Director Krennic lands what appears to be a mile or more from the Erso farm. A surprise 'attack' doesn't seem to be the intent, and even if it was, landing right in front of the house and 'storming' out of the ship would have been more effective.

Out of universe, of course, this landing gives Jyn time to escape and allows for some interesting shot composition. What is the in-universe reason? 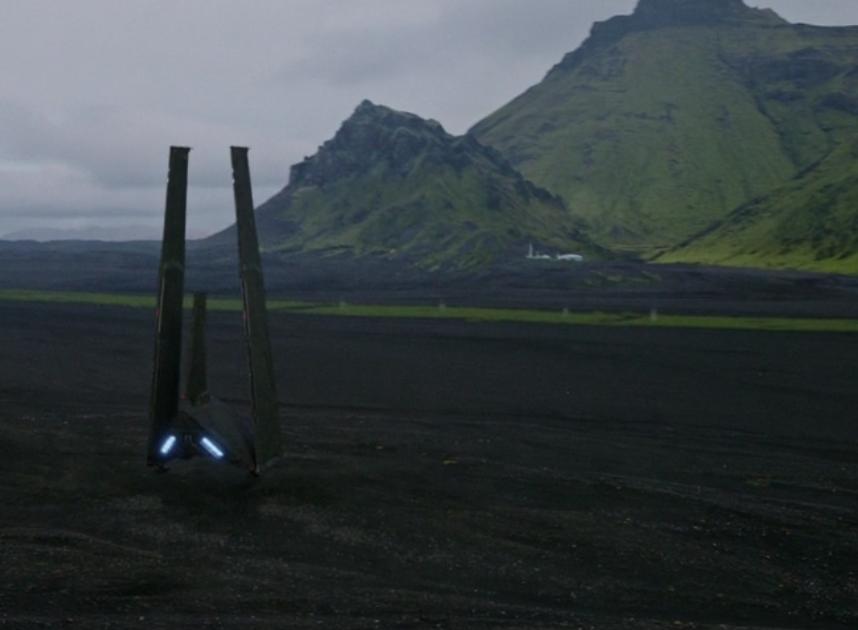 Krennic expresses some concern that Galen may have booby-trapped his surroundings. The ship performs a series of scans before it touches down. One assumes that parking so far away gives them more options in the event of an ambush.

Specifically, a Delta-class T-3c, all sharp angles and bare metal. It busily broadcast active scans of the landscape as its broad wings folded in for landing and its sublight engines tapered their thrust. Galen studied the associated readouts and let the specifications settle into his memory—not because they might be useful, but because he wanted to procrastinate for just a moment. To shut away the implications of what he was seeing.

The corner of Orson’s mouth twitched, as if he were taken aback. “My sincerest condolences,” he said, then gestured to the troopers and spoke more sternly. “Search the house. Shut down any machines—we’ll want them examined by the technicians.”
Four of the troopers obediently, rapidly, made for the doorway. Galen stepped aside to allow them past.
“I don’t imagine,” Orson said, “you’ve laid any traps? Nothing that would harm a patriot doing his duty?”
“No.”

The film's Ultimate Visual Guide also makes note that the shuttle is psychologically imposing. Landing at distance would presumably give anyone thinking of defying Krennic time to reconsider.

WITH ITS STARKLY GEOMETRIC hull shape and folding, batlike wings, an approaching Delta-class T-3c shuttle is an ominous sight. The sense of dread it inspires proves warranted when it lands and deploys its deadly passengers.

8
Why did Director Krennic personally go to the data vaults?
34
Does this cut material from Rogue One still appear in the novelisation?
7
Who is really responsible for the Death Star project?
16
What exactly are the capabilities and limitations of "scanners" in Star Wars?
4
Why does Krennic have these characters killed?
14
Why would Krennic trust Galen Erso?
10
Why did the First Order land AT-M6s so far away from the blast doors?
15
How did Krennic locate the Erso family's hideout?