Where do Airbender babies come from?

In Avatar the Last Airbender, we see from flashbacks that Aang grew up in the Southern Air Temple, a monastery of all men. In fact, the only female Airbender that I recall seeing in the series is Avatar Yangchen, and only as a past life of Aang. Given this distinct lack of women: where do Airbender babies come from?

Do there exist Air Temples of women (and if so, how do they arrange to meet together to procreate)? I'm guessing that they don't come from other nations, given that the Air Nomads are considered a "nation" of its own and inter-nation marriages seem virtually non-existent before their demise. So who are these mothers and how do they meet up with the father Airbenders?

I'm interested in society around the time that Aang was born. Obviously by the time of The Legend of Korra, Tenzin and his wife Pema were the parents of the only Airbender children in the world, at least until the events of Book 3.

There are female airbender temples and we know there is interaction

There are female airbenders even though not many are shown except briefly. 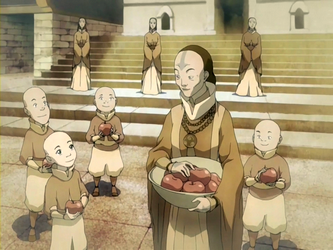 In the comic The Rift we learn about Yangchen's Festival (named after Avatar Yangchen) and see interaction between men and women as well. 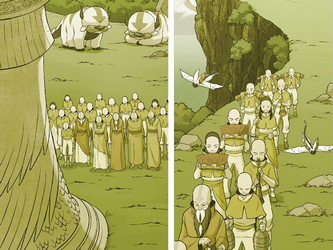 On the show, we got a limited view of Airbender life. Specifically, we saw Air temples and, in flashbacks, Aang's life in The Southern Air Temple.

That said, the Air nation was not known as the "Air Monks" or the "Air Temple People." They were known as Air Nomads.

In the article on Aang at Avatar Wiki, it says

Aang was born to two Air Nomads in 12 BG. After...confirming his identity as the Avatar, he was taken away by the monks of the Southern Air Temple

So, he was taken away TO the temple by the monks.

The article on the air nomads says

So, where did the babies come from?

Male and Female Airbenders who existed outside the monastic life.

Were there temples full of women?

When people speak of the Kingdoms of Avatar, we tend to forget one pertinent point:

Being born in one nation does NOT necessarily "predispose" one to BENDING of that nation.

In other words, while it is more likely a Fire bender will come from a line of Fire benders, this is not because its "genetically inherent" to people within the Fire Nation... it's because they are likely socialized more in a society where Fire Bending is common practice. From this, we can take another truth then:

Benders of any gender can hail from any nation.

In fact, I'd go so far as to say a bender can derive from two complete non-bender parents. So basically, ANY WOMAN could have an Air bender as a child. As such, there is no central "area" shall we say of "air bending women" from which all must hail.

Keep in mind that bending practices are essentially martial arts, and while many traditional martial arts have localities and sects [the Wu Dan of the Heinan provinces, the Shaolin Monks, the Shure-te practitioners of Okinanwa]not every person from these places are going to be versed in martial arts. The Air Nomads are a "tribe", but not in the sense of the Inuit or Native Americans; they are more along the lines of Shaolin, in that they are a sect that practice the art of bending, and have based tradition, dress and lifestyle on the art itself.

So, much like any body, even a non Chinese, can dedicate themselves to a Shaolin temple... any body could dedicate themselves to airbending. And much like a Shaolin Knight can have a child with an untrained woman, I'm fairly certain Air Benders can have airbending kids with other benders or non-benders... that is what Aang ended up doing with Katara, after all. His kids were simply raised as Air Benders.

Presumably most male and female airbenders live in airbender society, meeting and getting married and raising families, like people everywhere else and in the Earth, Fire, and Water Nations.

Presumably the societies in Avatar the Last Airbender are based on traditional East Asian societies. In those societies many males became life long Buddhist monks and most males spent some time in Buddhist monasteries at some stage of their lives. Most Buddhist men and boys become Buddhist monks, but for short periods, not for life.

We could assume that at any given moment in Avatar the Last Airbender most boys and men in the Earth, Air, Fire, and Water Nations would be living in secular communities along with girls and women and that only a small percentage of the males and females would be living in monasteries at one time. Just as in traditional East Asian communities. Thus we can, if we want, assume there is no problem with Airbender reproductive failure. Or there wasn't until the Fire Nation struck.

I dont think that airbenders come from their parents, because in some early episode in season 1, Zuko says to Aang "I suppose you wouldn't know of parents, being an airbender."

NonnyJohnsNonnyJohns
1
2
Add a comment  |
Highly active question. Earn 10 reputation (not counting the association bonus) in order to answer this question. The reputation requirement helps protect this question from spam and non-answer activity.

43
What determines a bender's element?

9
What printed materials from Avatar: The Last Airbender are canonical?
18
How did Avatar Aang have a wife and kids?
13
How did the fire nation kill all airbenders?
4
Who is this character from Avatar : The Last Airbender?
6
Avatar the Last Airbender graphic novels
4
How did Guru Pathik get in air temple without flying bison?
5
Avatar: How could Toph see earth that was flying in air
3
How come Korra could bend three elements so young before training?
5
What nationality was Guru Pathik (from a biological perspective)?