In which Voyager episode did the ship go to warp despite having sustained damage?

Most of Star Trek: Voyager has become a mercifully dim memory to me, but there was one moment that's really stuck with me. I'd like to know what episode it was from.

What I recall is this:

The ship is attacked, presumably by a more powerful enemy, because Janeway orders the ship to escape into warp. The friends I was watching the episode with and I exchanged knowing comments to the effect that it would never work, since it seemed to be a pretty common Star Trek trope that any attack on a ship--however slight--would knock out the warp drive and force the crew to deal with the situation at hand.

But in THIS case, the camera cut away to an exterior view of the ship tumbling through space. If I recall correctly, the camera is even rotating at a different rate than the ship, maybe even in the opposite direction, creating an impression of vertigo. And as the ship tumbles, the warp nacelles lock into position, and...BOOM, it warps away. My friends and I just stared, dumbfounded. Some of us might even have cheered after the shock wore off.

So...which episode was that scene in?

You might be referring to the Voyager's episode Scorpion S03E26 in which:

On the bridge, Paris reports that the alien ship is detaching and powering up, apparently readying to fire a weapon. Kes, who is also on the bridge, experiences another vision of the pilot on that bio-ship communicating with her. Janeway orders Paris to take them out of the area at maximum warp. As Voyager moves away, the bio-ship fires, not landing a direct hit but Voyager loses control. Paris is able to jump to warp speed, and the bio-ship does not give chase.

JANEWAY: Get us out of here-maximum warp!

78 EXT. SPACE-VOYAGER (OPTICAL) as it turns away from the Borg graveyard... the alien BIO-SHIP SENDS OUT a CRACKLING TENDRIL of ENERGY, whip-like, powerful, the same effect seen in the Teaser.

The tendril narrowly MISSES Voyager, but even so SENDS our ship SPINNING WILDLY!

80 EXT. SPACE-VOYAGER (OPTICAL) as it STOPS its tailspin and JUMPS into WARP!

You can see it here too:

Perhaps this was Year of Hell, Part 1? At one point Voyager is attacked by the Krenim Weapon Ship, which is certainly a "more powerful enemy" considering its ability to erase its targets from space-time. Voyager is forced to use warp to escape despite being heavily damaged. They do successfully escape, but the stress of travelling at warp speeds causes huge chunks of the hull to tear away. 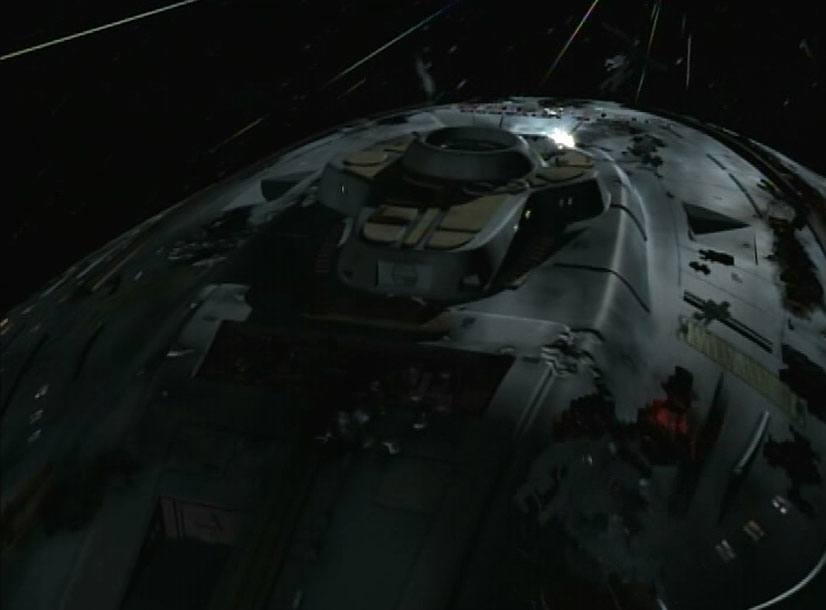 I'm trying to find video footage to see if there's any of the camera rotation you mention.

Edit: having found the episode and re-watched the scene I mentioned I don't think this was actually the episode you were thinking of. There's no shot of the ship going to warp, just the shot above of the hull peeling off. I'll keep looking.

Not the answer you're looking for? Browse other questions tagged star-trek star-trek-voyager episode-identification or ask your own question.

21
How could the Picard Maneuver confuse sensors from the Warp Era?
17
How did Quark avoid incarceration despite having committed many crimes?
15
Did the Voyager episode Future's End occur in the prime timeline?
12
Which USS Voyager is the real USS Voyager?
7
Did Neelix ever take/steal warp plasma from Voyager?
4
In which Voyager episode did the Doctor have sexual relations?
4
Which is the TNG episode where "time warp" is considered as a means of travel?
9
In Star Trek, prior to Discovery, has a ship been shown dropping out of warp from the outside?
6
What do we know of the technical advisors on ST:OS?