I have recently acquired some digital copies of 6 issues of the Witcher comics that were published from 1993 to 1995. 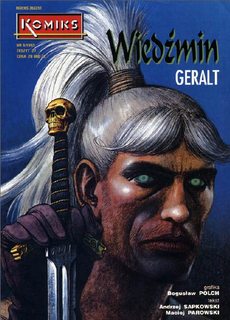 Sadly, they were in Polish, so more digging was required to find a Russian (fan-) translation (English translations don't seem to have ever existed).

The first of them is an adaptation of The Road With No Return short story (about Visenna, Geralt's mother, and Korin, a mercenary). This one doesn't add anything new to the lore, save perhaps for this lizard guy: 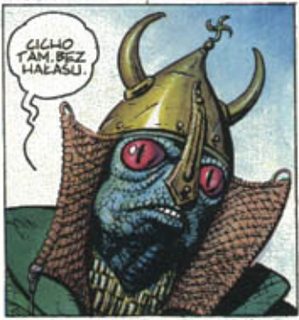 The other stories, however, appear to describe Geralt's past before the Trials of Grasses (or maybe after, hard to tell when you don't know Polish).

From the fan translation it seems that those comics also introduce some new witchers, most notably Geralt's mentors and some witchers from the School of the Cat.

Those stories could be an invaluable addition to the lore (if someone actually translates them); however, I am wondering whether those are considered canon.

All of the 1993–1995 comics are based on short stories by Sapkowski, (except the last one, Zdrada/The Betrayal). List from Wikia:

This is the reason Sapkowski is credited as co-writer – he did write the source material for all of them. As far as I know they don't condradict anything established in the novels.

Regarding canonicity, Sapkowski does not seem to consider anything canon beyond the books. Excerpts from an interview about the Witcher video games:

"Adaptations - although they can in a way relate to the story told in the books - can never aspire to the role of a follow-up. They can never add prologues nor prequels, let alone epilogues and sequels.

"If we level the field between books and their adaptations in other media, only the former can be the ones telling a story," he stated. "There can never be a different relation between a book and its adaptation, other than the one that without the book the adaptation would not exist at all.

"I realise that current times accustom us - which I find terrible - to the strange convergence of media and the freedom of mixing them. To me as a writer, the idea to write 'adjuvant content' and create something 'complementary' to a game or a comic is an absolute pinnacle of idiocy."

"I will definitely skip any 'alternative ideas'," Sapkowski promised. "It'll come easily to me anyway, as I don't know any of them. And even if I knew, it would be funny and silly were I to write based on the game's suggestions. I suppose I have made myself clear when I said that I will never accept any ideas and concepts of 'complementarity plots' and 'building coherent stories'. A story can only be contained in a book."

And from another interview in Polish:

All adaptations - movies, comics or games, including "The Witcher" - are only adaptations, they are completely separate feature films, the work of their creators . I have no references to Geralt's witchcraft, and they can not be treated as any canon, because they are the only ones I have printed in printed form. Therefore, if the story of the witcher is actually taken up - whether in the form of a prequel, a sequel or a spin-off - will not be the least adaptable to any adaptation, the elements of these adaptations will be completely overlooked - in the actual canon of the witcher's tales.

Not the answer you're looking for? Browse other questions tagged comics canon the-witcher or ask your own question.

9
Are Futurama comic books canon?
3
How canon are the comics?
10
Is Kaer Morhen the place where witchers originated?
9
How many witchers are there after Witcher 3?
16
Are "The Witcher" books as explicit as the game?
16
In the books is Geralt an exceptional witcher?
5
Timeline of All Witcher Games/Books?
6
In the Witcher books does Ciri have a magical scream?