When I was younger I read a series of 3 or 4 books involving largely traditional mages/dragons/enchanted forests. I'd like to buy it for some of my younger extended family members but I can't remember the name of it.

Here's what I remember from this:

If I think of any other details I'll add them.

This is The Enchanted Forest Chronicles, by Patricia C. Wrede. It's a 4 book series. The books are Dealing with Dragons, Searching for Dragons, Calling on Dragons, and Talking to Dragons.

The first book was originally published in the UK under the title Dragonsbane, so you may remember that title instead.

One cover of the first book (you may not have seen this particular cover design, there are others) 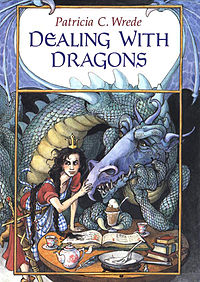 Blurbs from wikipedia, for the first book, Dealing with Dragons:

In which Princess Cimorene of the kingdom of Linderwall decides that being a princess is too boring and confining, leaves home to work for the dragon Kazul, and discovers and subsequently dissolves a plot by the wizards to take control of the King of the Dragons.

In which Morwen discovers that the wizards have stolen Mendanbar's sword, which kept them from stealing the Enchanted Forest's magic, and works with Cimorene to retrieve it.

In which Daystar, Cimorene and Mendanbar's son, is sent off into the forest with his father's sword and no knowledge of his heritage. It was written and published first, and then revised later to better fit with the prequel books.

Your descriptions, in the order you gave:

This sounds like the Enchanted Forest Chronicles / Dealing with Dragons books.

5
Fantasy book where a princess encounters many fantasy tropes including a dragon
2
Identify a book (probably Children's Book) by cover art
10
The Princess Who Lived with Dragons?
9
Fantasy novel I read awhile ago about magic like tendrils in the air

8
A series of books involving reptilian-alien protagonists
5
Series of books about a wizard who travels to the future
11
Looking for name of a book-series - Spaceship crashed, Civilization based on Magic rebuilt
4
Trying to find a series I started - dragons hibernating
26
Books about dragons and war from a cat-loving author
7
What children's fantasy series has furry hardback covers and stone-skimming dragons?
11
Book series of warriors who channel magic through singing