Did Luke really not know about Mos Eisley spaceport in the original “Star Wars” (1977) film?

In the original Star Wars (1977) film, Ben (Obi-Wan) Kenobi famously tells Luke the following as they look both look down on Mos Eisley from a nearby cliff:

“Mos Eisley Spaceport. You will never find a more wretched hive of scum and villainy. We must be cautious.”

Did Ben Kenobi really need to point this out to Luke? I mean they seem to have made a special/specific stop on that cliff simply to look at Mos Eisley in the distance… Why?

It seems to me that Luke Skywalker would have known about Mos Eisley (and possibly Mos Espa) since he was a gearhead who clearly tinkered with his X-34 landspeeder and the T-16 skyhopper on his aunt and uncle’s homestead. He even talks about going to Tosche Station to get some power convertors after his uncle purchases the droids from the Jawas. And it’s hinted that he explored the areas around him as well. Maybe Luke never visited it before, but would Ben Kenobi really make such a big deal out of showing it to Luke?

Is Ben Kenobi being obtuse—and a bit presumptuous—on purpose? Or is he just being a patronizing old man who is “mansplaining” the world to someone when he introduces Luke to Mos Eisley spaceport?

Looking for an in-universe canonical explanation. If a “Legends” rationale exists, let’s go for that; but canon takes precedent.

He refers to the outpost in Obi-Wan's hut, shortly after viewing Leia's message:

Luke: Look, I can take you as far as Anchorhead. You can get a transport there to Mos Eisley or wherever you're going.

It's not immediately clear that he's familiar with Mos Eisley's reputation, but it does seem likely. At the very least he knows it's a spaceport.

The intention behind Obi-Wan's statement is unclear

None of the novelizations really delve into why Ben feels the need to point out Mos Eisley's seediness (though the out-of-universe reason is obvious). The best we can do is guess:

Luke lived about 6 km from Bigg's homestead, 12 km from Tosche Station, 24 km from Anchorhead and roughly 80 km from Mos Eisley (60 km as the crow flies, but marked paths show much further).

This measurements were done by using the scale on the canonical Disney map (see below; click to enlarge) to determine width of a finger in km, then determining how many finger widths it took to get to destinations, and could be off slightly. Remember that is one way distance, so double for a round trip.

That's a far way to go, in an open topped vehicle in a desert planet with two suns. Heat, dust and chores to do would likely encourage going to the close shops over the ones with slightly better stuff. 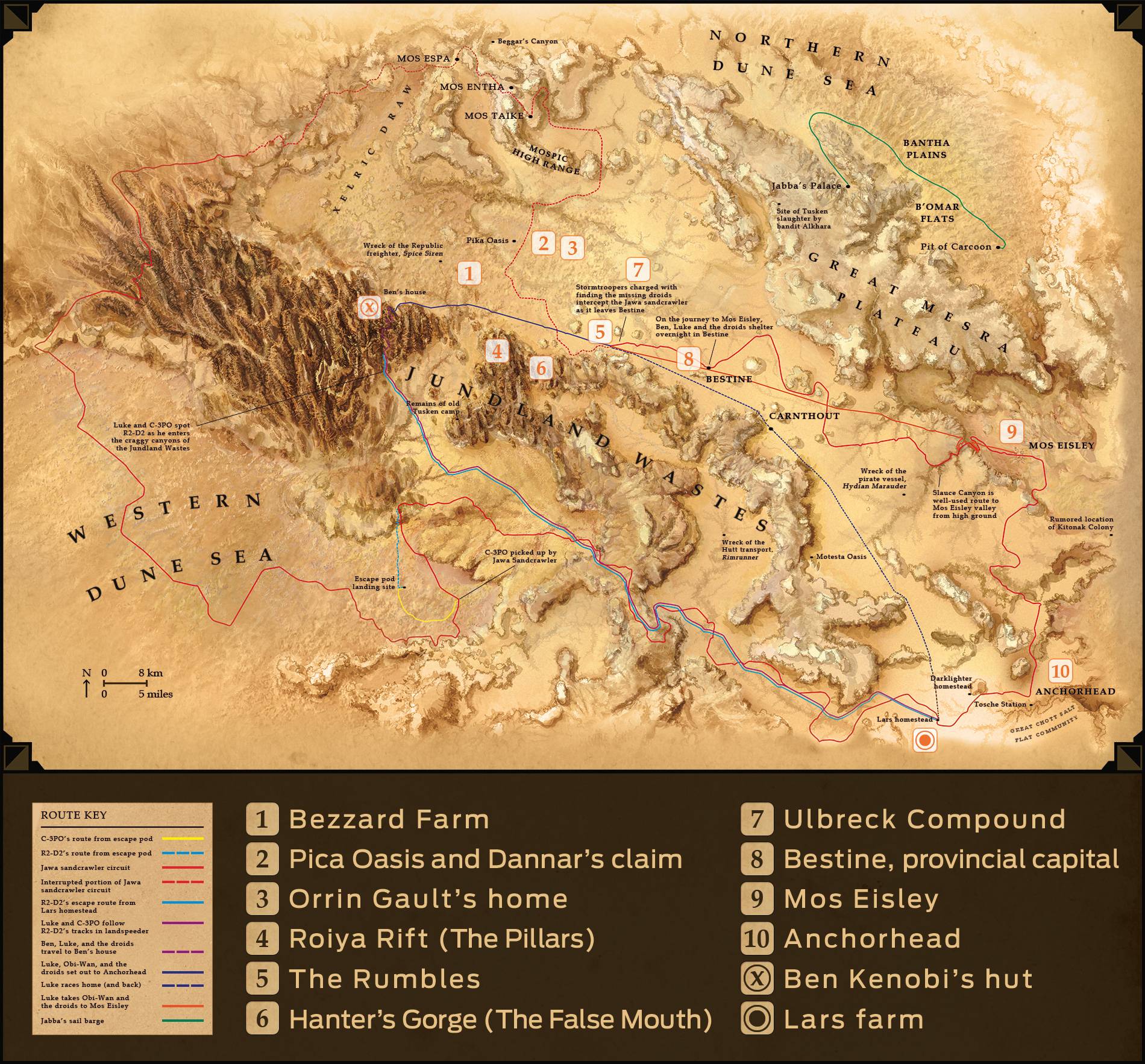 Yes, Luke knew of Mos Eisley, but Obi-Wan felt the need to remind him how dangerous it was.

It's important to remember that - especially in the eyes of Obi-Wan Kenobi - Luke was a very inexperienced youth with a penchant for getting himself in trouble. Luke has led a very isolated life on the Tatooine equivalent of a small rural farm. Also, settlements on Tatooine tended to be very, very small due to the climate & rough conditions. Life on Tatooine was very similar to that of the early pioneers heading west back in the Old West of 1850's America.

The Tosche Station mentioned by Luke is nothing more than a run-down little bar/garage consisting of two buildings on the surface. Underneath the buildings (Tatooine settlements tended to be at least half underground because of the heat), there was a garage large enough to hold a few speeders and something the size of Luke's T-16 Skyhopper. There was also a small restaraunt/bar and a few rooms that you could rent like a motel. Tosche Station basically acted as a waypoint for the numerous people living out on the edges of the Jundland Wastes. Think of it as the "general store" from an Old West town - a place where you go pick up the mail, get that part you ordered, buy supplies, etc.

The next largest place is Anchorhead, which is roughly equivalent to a very small town - a point where you can "catch the bus" to the city (which is exactly what Luke had offered to Obi-Wan).

Mos Eisley - in comparison - would be a huge city, like the Tatooine equivalent of New York City.

Even IF Luke had been there before (he had been there at least once in the Legends continuity), it's still likely that he would vastly underestimate the kind of trouble they might find there. Luke's idea of trouble would be more like, "Hey - remember the time that swoop-racer got drunk at Tosche Station's bar and started a fight with a Jawa?". A hilarious example, yes, but it illustrates the difference. A drunk fighting a Jawa and wrecking the place wouldn't even earn a batted eye in Mos Eisley, whereas in Tosche Station they'd be talking about it for months if not years later.

Kenobi, on the other hand, understands how dangerous it can be and is simply reminding Luke to be careful while they're in the spaceport. The fact that the Empire has a garrison there is completely irrelevant, as well - the city itself offers far more danger than just a few stormtroopers.

As for why they're overlooking Mos Eisley from a cliff, the most likely explanation is that Obi-Wan wanted to check out the city from a distance just to make sure nothing was obviously wrong - like an Imperial Star Destroyer hovering over it, for instance - before they got any closer. He then took the opportunity to warn Luke... a warning which apparently fell on deaf ears since Luke got into trouble not five minutes after they arrived.

Now this is an interpretation:

Ben is just thinking out loud

Ben is an old wise man. He states the obvious because old wise men know that young men are not wise.

Ben already needed to save Luke a few hours ago when they've met.

It's quite reasonable that in Ben's logic it wouldn't matter what Luke thinks he knows about Mos Eisley, he is prone to do stupid things because he is currently not a warrior, not even someone smart.

The rest of the answers are pretty good, but I'd like to point out that since Luke has only ever lived on Tatooine that he knows of, he may not know how Mos Eisley compares to other cities on other planets. To me, Kenobi is suggesting that Mos Eisley is a hive of criminal activity, arguably one of the worst in the galaxy, that thrives due to being so far from the galaxy's political epicenter, and is rarely policed, which Luke does not have a reference for.

It doesn't say whether Luke has been or not in the movie, but considering he can't walk into a bar without a run-in with a wanted murderer, I'd say probably not.

Additionally, Lucas, to me, is obtusely foreshadowing that there is going to be trouble when they get there, which creates tension for the next scene. It also sets up Kenobi as a capable character to those unfamiliar with him, which is everyone in 1977.

Luke wasn't paying attention (thinking about his recently killed relatives). Ben was reminding him of the dangers that Mos Eisley posed to the inattentive and naive.

En route to the group’s destination, Luke had a hard time concentrating. He couldn’t stop thinking about his aunt and uncle, and what the Empire had done. But after the third time he’d strayed off course, Ben suggested they park the landspeeder and take a moment’s pause.

Luke parked on a high, craggy bluff that overlooked a canyon. The droids followed Luke and Ben to the edge of the bluff and gazed out over a wide, haphazard array of runways, landing pads, crater-like docking bays, and semidomed structures that sprawled across the stark canyon floor.

“Mos Eisley spaceport,” Ben said. “You will never find a more wretched hive of scum and villainy.” Glancing at Luke, he added, “We must be cautious.”

Ben and Luke got the droids onto the back of the landspeeder, then the group resumed their journey. This time, Luke stayed on course.

21
Did Luke really "stumble across" the recording?
34
Who, or what, are the human characters in the original 1977 Hildebrandt Star Wars poster?
66
Why did Obi-Wan use his lightsaber in the Mos Eisley Cantina?
22
Who gave the order to kill Owen and Beru Lars?
19
Why was Mos Eisley spaceport the most wretched hive of scum and villainy?
59
Was the original Star Wars film originally called "The Star Wars"?
16
How did Luke and Obi Wan evade imperial troops in Mos Eisley Cantina?
3
Why did the droid's escape pod land so near to Mos Eisley?
6
What is the Physical Distance Between Mos Espa and Mos Eisley?