Did the other Endless know that Dream was held prisoner?

In the first volume of The Sandman, Preludes and Nocturnes, Dream was captured and was kept in prison for many decades.

Did his brothers and sisters know about this?
And if they did, why did none of them ever come to help him ?

Neil Gaiman addressed this issue in The Sandman Companion.

Briefly: Fans have noted Death would have been there for Roderick Burgess when he died, so she positively knew where Dream was. But the Endless are not a superteam who rescue each other when they get in trouble. The other Endless would not necessarily have wanted to free Dream; and given his exceedingly proud and haughty nature, Dream would not have welcomed their help.

The exact quote is as follows (emphasis added):

Hy Bender: Speaking of things you're often asked, I know another one is, "When Burgess died, wasn't Death there to meet him? And if so, wouldn't she have found out at that point about the Sandman being imprisoned by Burgess?"

Neil Gaiman: Right, with the implication that this is a huge hole in the plot. But to my mind, Death knew about the Sandman being trapped as soon as it happened. Everyone in his family did.
The reason the Endless didn't free him isn't because they weren't aware of the situation, but because they aren't a superteam; rushing to the rescue isn't what they're about. The Endless stick to hoeing their own farms. As personifications of things, they're not causative. They're barely reactive.
Besides, even if the Endless had acted to break the Sandman out, he probably would've been angry at them for doing so. He definitely wouldn't have been anything approaching appreciative.

When they meet up in The Sound of Her Wings, Dream brings up that the ritual was intended for her, and she replies "I know." Nothing else is really said about it. 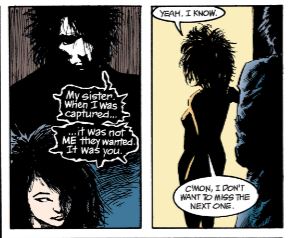 We're not certain if the other Endless knew about it while he was imprisoned. Certainly they would have known if they tried to contact him. As for help... well, the family is... fractured at best. Destiny will only do what his book tells him to do. Desire is not a friend, and Despair is close to Desire. Delirium might've helped, but often lacks the ability. Death might have as well, if Dream had called for her, although we can't be sure what form her help might have taken (Burgess and the rest dying would not have aided his release). Finally, Destruction is... not taking calls.

Unfortunately, Dream is incredibly stiff-necked, and we are shown no such call to anyone regardless. He'd rather wait for sheer mortality to creep in and make his jailors sloppy, until he could free himself.

It's worth noting that in Overture, other moments are shown where Dream is imprisoned. The first is well in the past, and he does attempt to call his family for help, but Delirium is in the process of changing and cannot, and Desire gives questionable help at best. The second time he refuses to call anyone, until Destiny finds something not in his book, believes Dream is to blame, and rips him forcibly from his prison to yell at him for it.

So the family of the Endless is not really as helpful to each other as your question suggests.

12
How did Roderick Burgess capture Dream instead of Death?
8
How will Death of the Endless die?
7
Is Mister Dark part of/Homage to The Endless?
6
What did Morpheus learn in The Sandman: The Dream Hunters?`
7
What did Vassily see when he looked at the sleeping woman?
3
Why is Morpheus exhausted in Overture #6?
1
How did the Marauders know about Hope in the Messiah Complex?
7
What is the relationship between Death of the Endless and Daniel Hall like?
4
How does Unity know so much about the Dreaming, vortices?
6
Why Hell becomes worse after angels took over it in Sandman