Where has Luke Skywalker been?

Is there any info out about where Luke has been since the destruction of the second Death Star?

I have read the Aftermath trilogy, but there is no info in these stories as previously stated in another question.

In Bloodline he is ambiguously out training Ben Solo, but no real details about what's been going on with him.

Any evidence on what he has been up to?

According to the Star Wars Wookieepedia:

After the fall of the Empire, Luke founded a new Jedi temple in an attempt to rebuild the Jedi Order. However, he was betrayed by his apprentice and nephew Ben Solo, the man who would become Kylo Ren, who killed the rest of Luke's Padawans and joined the dark side under the mysterious Snoke. Blaming himself, Luke disappeared and withdrew from the galaxy, going on a quest to find the first Jedi Temple. Years later, Luke was found by the Force-sensitive scavenger Rey, who followed a map to him left in fragments with R2-D2 and Lor San Tekka.

The above information is given to us by Han Solo in Episode VII, as can be seen in the following quotes from the Episode VII transcript:

HAN: This map's not complete. It's just a piece. Ever since Luke disappeared, people have been looking for him.

HAN: He was training a new generation of Jedi. One boy, an apprentice turned against him, destroyed it all. Luke felt responsible... He walked away from everything.

FINN: Do you know what happened to him?

HAN: There're a lot of rumors. Stories. The people who knew him the best think he went looking for the first Jedi temple.

REY: The Jedi were real?

HAN: I used to wonder that myself. Thought it was a bunch of mumbo-jumbo -- magical power holding together good, evil, the dark side and the light. 'Crazy thing is, it's true. The Force, the Jedi, all of it. It's all true.

It looks like when this book is released later this year it may answer my question. This was posted on UnboundWorlds: 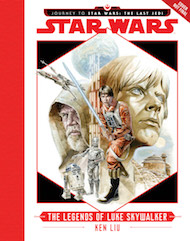 Details are scarce on this Journey to Star Wars: The Last Jedi novel. Liu, who you probably know as the author of The Grace of Kings, announced the book on his blog a few days ago. Given the degree of secrecy surrounding the title, I’m guessing that we might learn a little more about what the great Jedi Master was up during his self-imposed exile. Honestly, though, I don’t know any more about it than you do.

14
When was Kenobi planning on training Luke to "save the universe?"
138
How many times was Obi-Wan less than honest with Luke?
35
Did Obi-Wan ever pay Han Solo? If so, where did he get the money?
12
Why did Obi-Wan wait years after his death to tell Luke to go to Dagobah to find Yoda?
8
Did Obi-Wan train Luke in between A New Hope and The Empire Strikes Back?
80
Did Luke play any significant role in “Return of the Jedi?”
10
Which of these two events happen earlier?
8
What did Luke actually do to evidence being considered a great Jedi...?