Do only good wizards appear on Chocolate Frog Cards, or can evil wizards like Voldemort also appear on them?

Do only good wizards appear Chocolate Frog Cards (also known as Famous Witches and Wizards Cards), or can evil wizards like Voldemort also appear on them?? 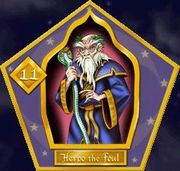 There are a number of wizards with Frog Cards that are definitely on the shady side. It's not clear if they're all outright evil, but their actions would suggest they're definitely not that nice.

Merwyn the Malicious - Credited with the invention of many unpleasant jinxes and hexes.

Modern dark wizards of note (such as Lord Voldemort and Gellert Grindlewald) don't appear to have cards.

Evil wizards could appear, as long as they didn't offend the Ministry.

It was possible to be taken off the Chocolate Frog cards, as this quote suggests.

“They’re trying to discredit him,” said Lupin. “Didn’t you see the Daily Prophet last week? They reported that he’d been voted out of the Chairmanship of the International Confederation of Wizards because he’s getting old and losing his grip, but it’s not true, he was voted out by Ministry wizards after he made a speech announcing Voldemort’s return. They’ve demoted him from Chief Warlock on the Wizengamot - that’s the Wizard High Court - and they’re talking about taking away his Order of Merlin, First Class, too.”
“But Dumbledore says he doesn’t care what they do as long as they don’t take him off the Chocolate Frog cards,” said Bill, grinning.
(Order of the Phoenix, Chapter 5, The Order of the Phoenix).

Bill/Dumbledore could just be being flippant, it's true. However, Dumbledore's other suspensions were real enough. I think it's reasonable to suppose that appearing on a Chocolate Frog card was seen as a privilege that could be withdrawn, either by the Ministry or by the manufacturers. It does demonstrate that there are people who select candidates to go on the cards, and that they bear in mind the public feeling towards those individuals when making their picks.

The process of selection for Chocolate Frog personalities is never spelled out. Valorum's answer is proof enough that evil wizards were included. However, the example of Dumbledore also shows that one's reputation has to be in good standing to merit inclusion. For that reason, Voldemort wouldn't appear on a card. However, evil wizards from the distant past could qualify since their misdeeds were so historic that they didn't affect the Ministry of the present day. They could be appreciated for their strength or potency as wizards since the victims of their wickedness were of a different era. The selection of more modern fiends would probably be taken poorly by the wizarding community. Therefore, it seems that more historic evil wizards were eligible for selection.

Yes, Dark wizards can appear on Chocolate Frog cards. This is confirmed by canonical information.

The card of a Dark witch, Morgan Le Fay, is referred to in the books. In "Harry Potter and the Philosopher's Stone", Ron mentions having six cards of Morgan Le Fay, and then gives Harry one. So not only does Morgan have a Chocolate Frog card, it's also probably a fairly common one, since Ron as a first year without much money to buy candy with already has six cards of her. Morgana being a Dark witch seems to have had no effect on her appearing on a Chocolate Frog card.

30
Were there (or are there) any Dark Wizards who were Sorted into the Hufflepuff House?
13
Could chocolate frogs function as mass surveillance?
5
Where can I read the text on the Jelly Belly brand Harry Potter chocolate frogs?
7
How did certain wizards come to be famous in the Muggle world, and why don't they exist in recent times?
48
How did Ron get five hundred Chocolate Frog cards?
2
Could Harry have contacted Dumbledore with a Chocolate Frog card?