Has GRRM ever confirmed that he named some ASOIAF characters after the Muppets?

In The World of Ice and Fire, we are introduced to few historical Tully characters, which are:

To those who may not be familiar with the Muppets, these three Lords share the same names as Puppet Characters from the cast of popular shows like Sesame Street, which are:

Guess what colors Kermit, Elmo and Grover are ?

This is definitely not just a coincidence.

Kermit, his father Elmo, and his great-grandfather Grover are references by George R. R. Martin to The Muppets.

But there is no reference added as to where exactly did GRRM confirm that was the case. Googling doesn't yield any statement from GRRM or his team. Has GRRM ever confirmed that he was indeed influenced by the beloved puppet characters while naming the Tully Lords?

Yep. Not sure why exactly, other than it amused him, but the colors of the three muppets has been noted (Red, Green, Blue)
...
There was also an Oscar, brother to Kermit, but he didn't make it into TWoIaF.
Elio Garcia, Twitter, 2017-04-04 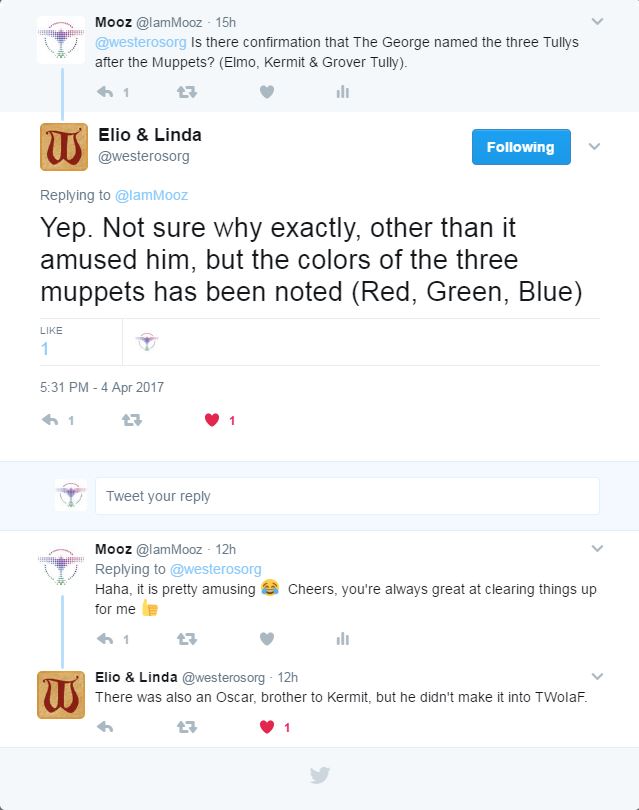 Why should you believe this answer?

9
Is the origin of the words 'valar' and 'Valyrian' the same?

16
Has Iain M. Banks ever cited his inspirations for the backstory of Cheradenine Zakalwe? (possible spoilers)
101
Why is it that after 8,000 years, technology in Westeros has not evolved in the world of the Game of Thrones?
15
Has Daenerys Targaryen ever learned to wield a weapon so far in ASOIAF?
14
Is there any evidence that Rufus Carlin is named after the character (and actor) from Bill and Ted's Excellent Adventure?
10
Do we ever find out who sent the catspaw after Bran in the show?
31
Has George R. R. Martin ever officially stated that the shape of Westeros was based on the United Kingdom?
13
Has there ever been a peaceful vote to determine who sits on the Throne?
3
Has a reason ever been given for the decision to use the name Martha?
8
Has Tolkien ever commented on the similarity between the name "Baggins" and the French word for "ring"?
14
Was it confirmed by anybody that an orc was modeled after Harvey Weinstein?