Why do humans rule Mushroom Kingdom? 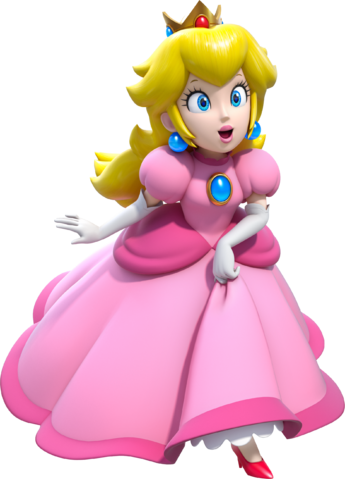 By all means, Princess Peach looks human. So, her father should also be human.

Citizens of Mushroom Kingdom are Toads (colorful toads) and maybe, Yoshis (colorful Yoshis). Why would humans rule it? What's the back story of it?

In the original depictions (in the How to Win at Super Mario Bros. gamebook, for example), the Mushroom king and Princess Toadstool are shown to be much more like mushrooms with the guards appearing to be at least partially human.

Later games explained the difference by having the the Mushroom-loving (human) people of the Mushroom Kingdom transformed into Mushrooms. 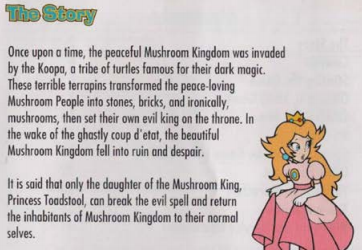 "These terrible terrapins transformed the peace-loving Mushroom people into stones, bricks, and ironically mushrooms, then set their own evil king on the throne"

As to the specific reason why the inhabitants of the spectacularly multicultural Mushroom Kingdom would choose the Mushroom King and his daughter as their rulers, the very simple answer seems to be that they alone possess the magical power needed to control the enemy on their borders, the evil Kooper.

For the record, we see at least one other instance where a "kingdom" under the Mushroom Kingdom chooses to make Peach (and by extension her father) their ruler by common acclamation in the Mario comic "A Mouser in the Houser" 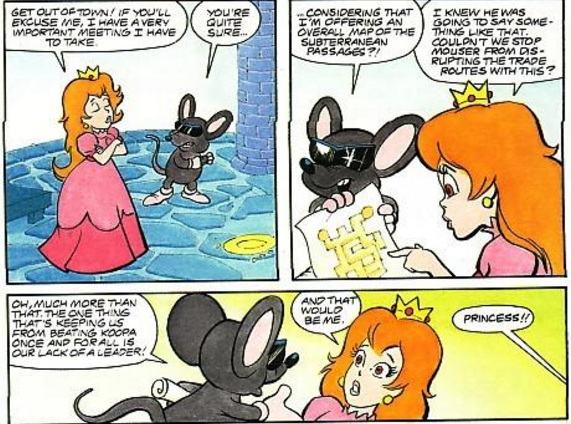 12
Is there a real King (or Queen) of the Sugar Rush Kingdom?

9
Has the system of government ever been explained for the Mushroom Kingdom?
24
Why does Carmen Sandiego steal?
39
How did the Mario Brothers discover/enter the Mushroom Kingdom?
27
Creepy dinosaur pc game identification
6
How is Princess Daisy a tomboy?
48
Are the pipes in the Mario series made by Mario as tunnel entries to infiltrate Bowser's kingdom or are they a normalcy?