Have there ever been any canonical images of a grue?

Grues are a mainstay of the Zork franchise, but one of the characteristics of a grue is that they only attack in pitch blackness so the player never sees one directly.

I know there are some conflicting first-hand descriptions of the physical characteristics of a grue, but have there ever been any images produced or condoned by the developers?

Sorcerer (second game in the Enchanter trilogy) provided this image as a feelie (a physical artifact included with the game): 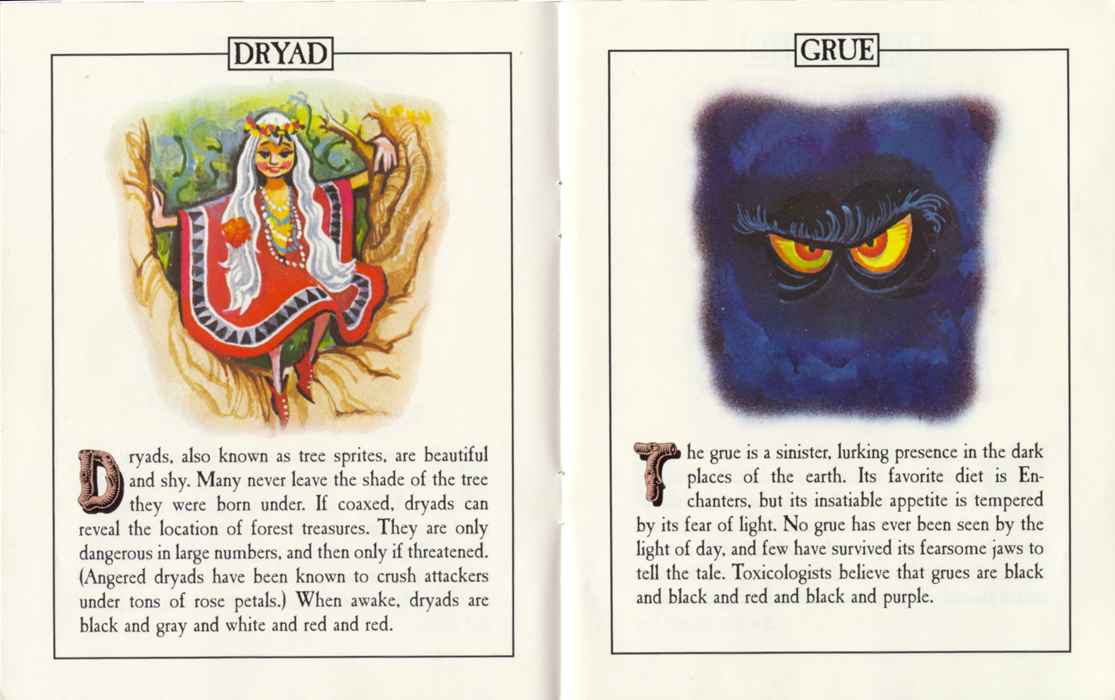 As you can see, this gives a thorough understanding of grue anatomy. The text claims that grues are believed to be "black and black and red and black and purple," but this information is only included for the purpose of a puzzle (as a primitive form of copy protection; if you copied the game but not the feelies, you would be unable to reproduce these colors).

Image sourced from The Zork Library.

If you are looking for a more detailed picture than the existing answer, you may also want to look into images of Grue drawn from author Jack Vance's work.

Vance was the original creator of the "Grue"; however, he never actually describes it fully in his work. The hints he gives when it does appear are often contradictory or unhelpful. Zork's use of it as an unseen/undescribed monster is a joke referencing Vance's refusal to explain exactly what a Grue is.

There are no canonical images of the Grue that I am aware of; however, there are descriptions, the most helpful(?) of which are:

From the nearby forest of sprawling kang trees came the moaning of a grue, arousing the hairs at the back of Rhialto’s neck.

From: Rhialto the Marvellous, chapter 5

This is the skull-stone of a grue, and at this moment trembles with force.

She manifests the brooding carelessness of a forest grue.

From: Cugel the Clever, this page (no numbers provided)

From: Tales of the Dying Earth, this page (no numbers provided) - from a listing of creature descriptions written by Follinense, wizard of Mad King Kutt.

I found two additional "images" for a grue, although neither of them show more than Kevin's image I felt like I should add them for posterity.

First one is this death to grues in Return To Zork, thanks to Radhil for reminding me of it: 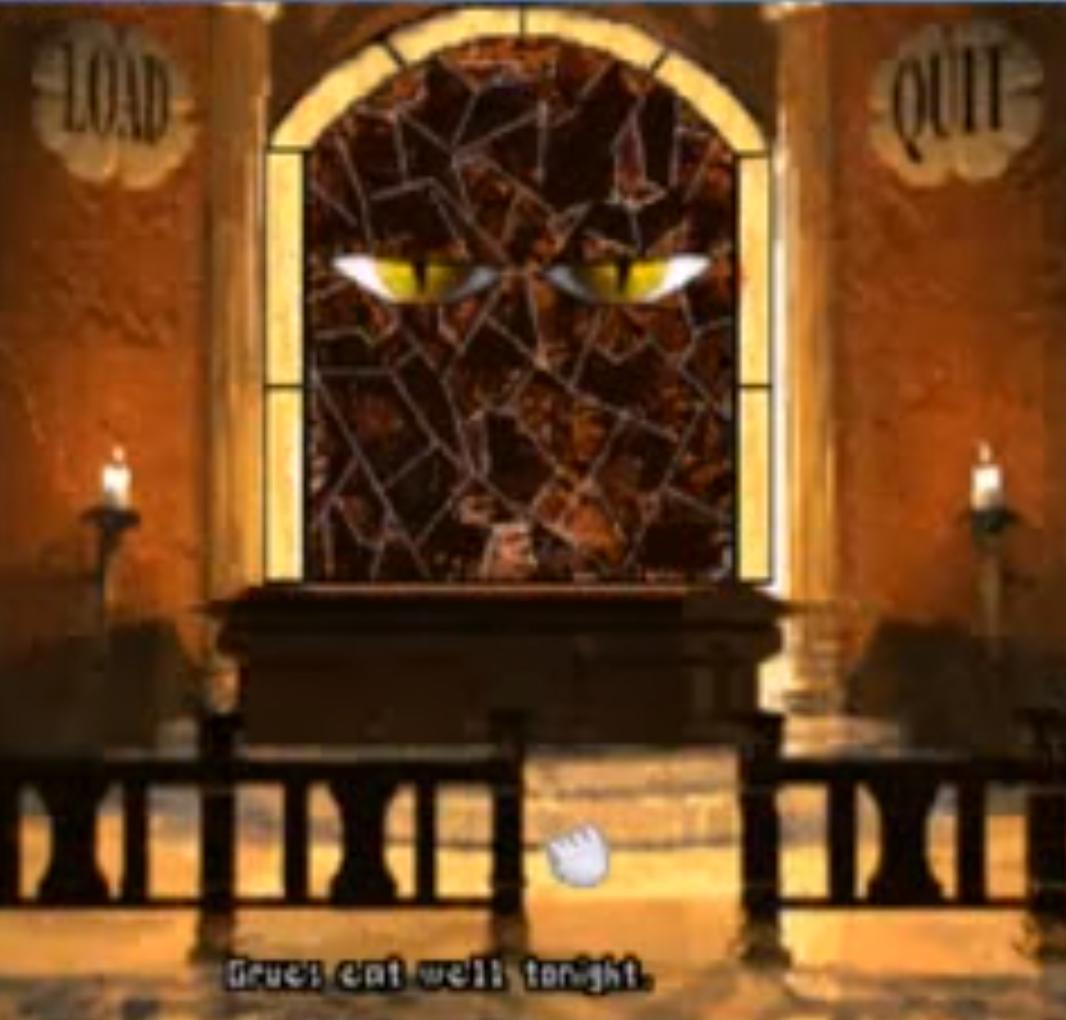 The second is from the book in Zork: Nemesis titled Interview With A Grue: 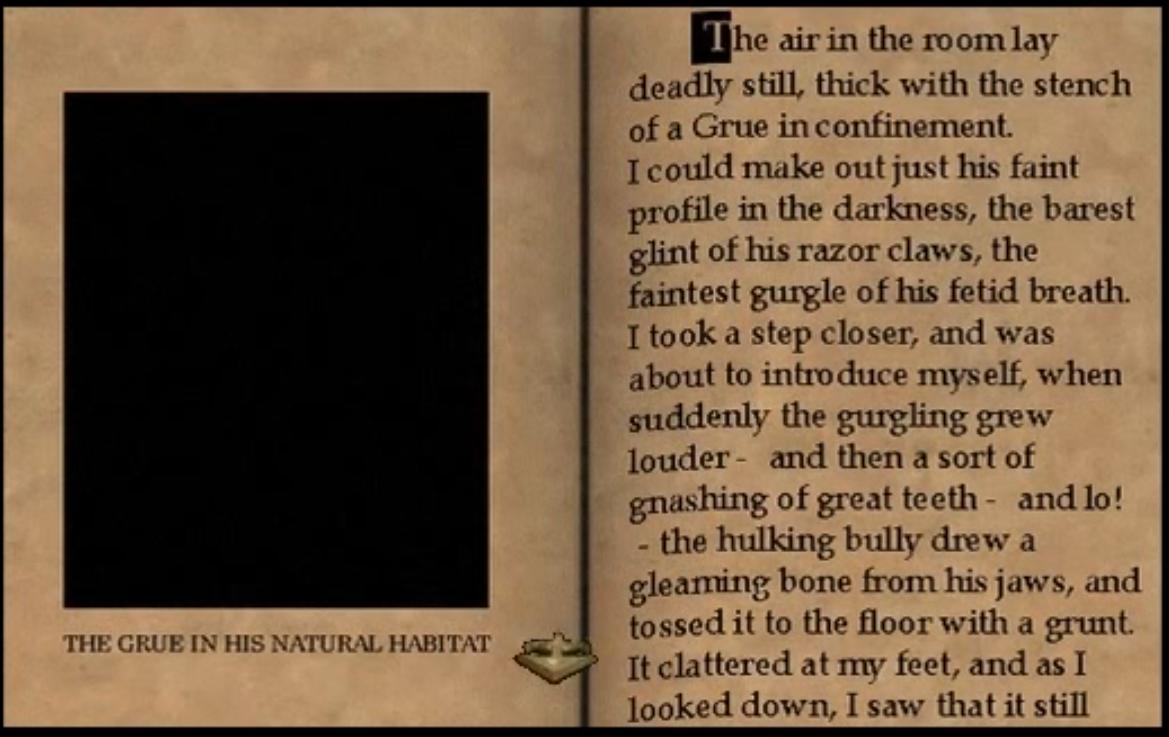 There is an image of some grues in one of the Zork "Choose Your Own Adventure" books. Bizarrely, they look not unlike the Genestealers from Warhammer 40,000. The image is not coloured.

There is at least a limited verbal description of one from Craig Shaw Gardner's Wishbringer novel, one of a short series of books from Avon based on the Infocom games.

The hero of the book meets Amy Sue Grue, and is advised never to look at her. She assures him that she'll know if he peeks - "You could say we have have eyes in the back of our head, as well as a number of other places". Later, when she takes his hand, the narrator remarks that her had is hard and scaly. Later on, he accidentally catches a glimpse of her hand, and an eyeball on the knuckle sees him do so. As a punishment, she boxes his ears. Seeing a grue in its entirety is punishable by death, so just a glimpse of her hand gets his ears boxed.

Not the answer you're looking for? Browse other questions tagged zork or ask your own question.