Did Sisko and Opaka's paths ever cross again?

OPAKA: My work is here now, Commander. But your pagh and mine will cross again.

Sisko did have a vision of her later in the series, but did the writers (or novels) ever actually deliver on this statement? Did they in fact truly cross paths (or pagh) again?

Not on screen, and not so far in licensed stories. In Pocket's novels, Opaka did eventually return from the Gamma Quadrant (Rising Son, Lesser Evil, Unity), and Sisko has returned from the Prophets, but has chosen not to try to meet with Opaka as yet (Rough Beasts of Empire). [Source: "Opaka Sulan" on Memory Beta]. Memory Alpha's page, which often notes production details, does not give any reason why the producers never tied off this loose end.

The Kai appears briefly in an "orb vision" in DS9: Accession. 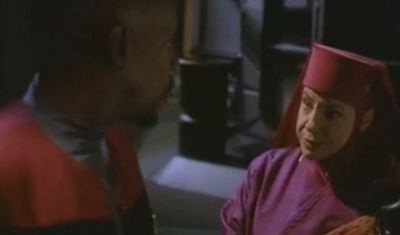 Sisko keeps walking. The lights of the Promenade seem DIMMER now. The background hum of the station has dropped away. The feel is ominous... strange... he hears the RUSTLING again, whips around toward the source.

Disturbed, he turns to continue walking -- and finds himself face-to-face with...

According to Memory Alpha (referencing an anecdote from the DS9 Companion), an earlier version of the draft script indicated that Sisko had concerns that it wasn't simply a vision but an attempt by the real Kai to contact him telepathically.

In ultimately unused dialogue from the second draft script of "Accession", Kira suggested to Sisko that the vision of Opaka he had seen was actually an attempt by Opaka to telepathically communicate with him. Skeptical of this theory, Sisko remarked, "We don't even know if she's still alive," which Kira then acknowledged.

50
Was There Ever an Official or Canon Retcon or Explanation For the Eugenics Wars?
52
Why was Kai Opaka written out of Star Trek: Deep Space Nine so early?
12
Did Sisko ever return from his tutelage with the Prophets?
5
Do we ever hear from O'Brien's 'dog' again?
13
Was "Far Beyond the Stars" ever written up by anyone?
14
Is Sisko referring to the events of First Contact here and if so how does it affect things?
12
Why did Starfleet not attempt to make contact with the Prophets?
3
Is there any official correspondence between Starfleet and Bajoran Militia ranks?