What kind of ship is the ship–bat in Pacific Rim? 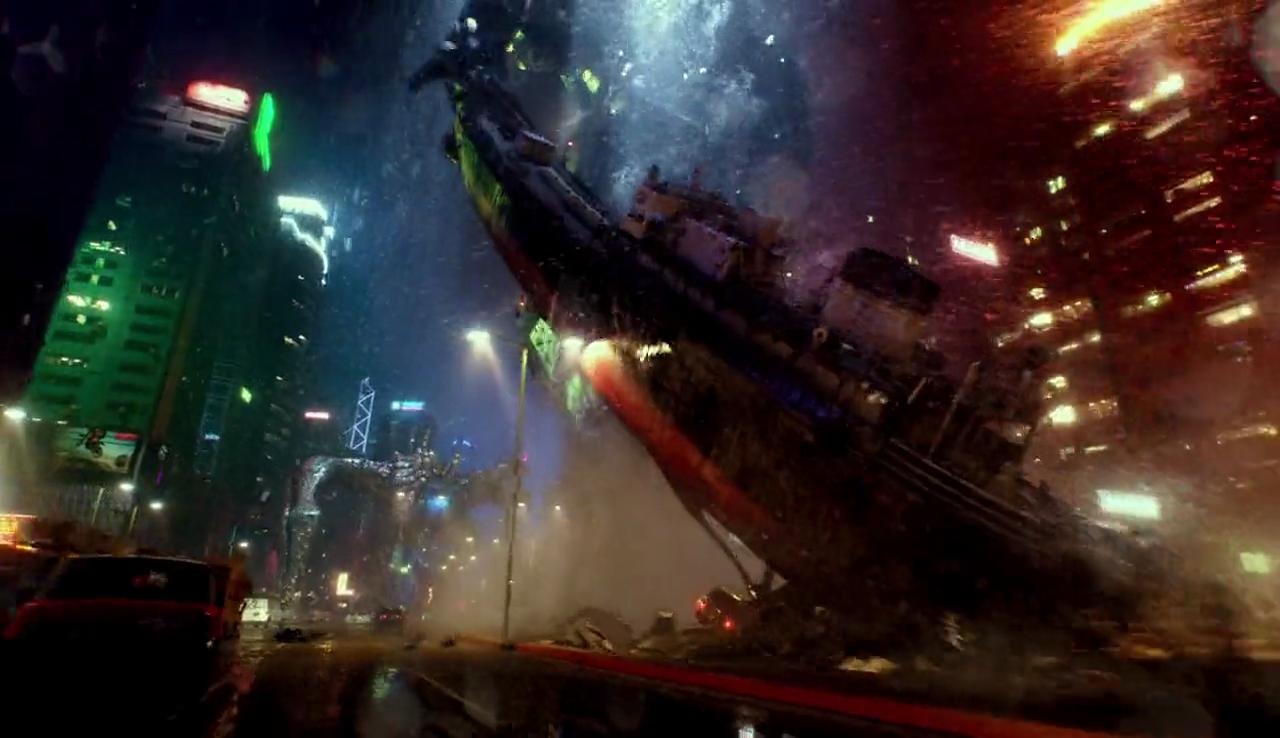 All the shots put the ship's beam (width) at 1 or 1½ road lanes. Despite the epicness of the sequence, that's a puny ship. I always thought it was a tanker.

This question bothered me for some time - given the height of a Jaeger, how could it pick up a ship that is two or three times it's height?! But it need not be Hollywood 'rule-of-cool' Lilliputian scaling down, and while still technically an 'oil tanker' to the layman, the type of ship is called a 'Bunker Tanker'. They are used for refueling larger ships in ports without the need for docking. There are too many types to be any more specific than that, but this answer solves the size problem while squaring the appearance.

By observing the height of the guardrail, which at MINIMUM, under the old standard would be a meter high, and from this you can estimate the ships deck width to be at least 9-10 meters (22-25 feet) - a major avenue of two lanes each way in Asia is 12 meters (smaller cars and all) so your original 1 1/2 car width estimate was spot on.

The quote from the novelisation claims it to be wielded as "a hundred meter baseball bat", but Gipsy Danger is officially stated to be 79.2 meters tall, so we can see through observation this is simply NOT possible..

At 180ft in length with a beam of 22-25ft, You get a ratio of 1:7, matching the 1:7 ratio of most common, larger oil tankers, such as the Panamax-standard. So YES, it IS a small ship overall, to be sure, but within the realm of possibility. In fact, in universe, this would actually help - a larger ship would immediately crumple and bend at the middle like a tin can out when taken out of the water. The smaller the ship, the more chance it has to maintain structural integrity and allow itself to be used as a melee weapon!

In Universe: Your answer is that it IS an oil tanker, only the smaller, coastal type called a Bunker (or Bunkering) Tanker. Out of Universe: Since no markings or ship name is observable in the scene, I wouldn't be surprised if this exact make and model exists only as a wireframe model on an animator's computer, having taken features that say: 'oil tanker' to the layman from a multitude of different real-life boats. There ARE a couple of features that are out of place leading me to this assumption, but... In Real Life: If you feel lucky, it's now up to you to Google Image these ships all night, and maybe you will find that specific one. Hope this helped - this bothered me too - enough to devote this research to!

The novelisation indicates that it's an oil tanker.

Newt starred, the Jaeger held what appeared to be— through the blur of his cracked glasses—an oil tanker. The huge container was gripped in Gipsy’s massive hands like a hundred-meter baseball bat. An oil tanker! Had to be several times Gipsy Danger’s mass. Newt was no engineer, but he could appreciate how amazing it was to create a machine that could take kaiju batting practice with an oil tanker.
Gipsy Danger leveled the kaiju with a blow of the tanker, then dropped it and squared off against the kaiju, horn still thundering out its challenge.

To complement the other answers, the following video is an interview with the Industrial Light & Magic (ILM) team (which worked on the visual effects of the movie Pacific Rim).

David Fogler (ILM Model Supervisor): Guillermo presented this fantastic story point. "Here's Gipsy with a baseball bat, only it's an oil tanker". Then we say: "But it doesn't work with an oil tanker. An oil tanker is five times bigger than Gipsy Danger; can't use it as a baseball bat". And he says: "doesn't matter; make the tanker work". The tanker in the street fight sequence is not at all shaped like a tanker. But in the end, that baseball bat freighter works like a dream.