According to the (canon) Star Wars: From a Certain Point of View short story "Beru Whitesun Lars", Owen and Beru were fully aware of Luke's parentage and the fact that his father had become corrupted by the dark side of the Force. 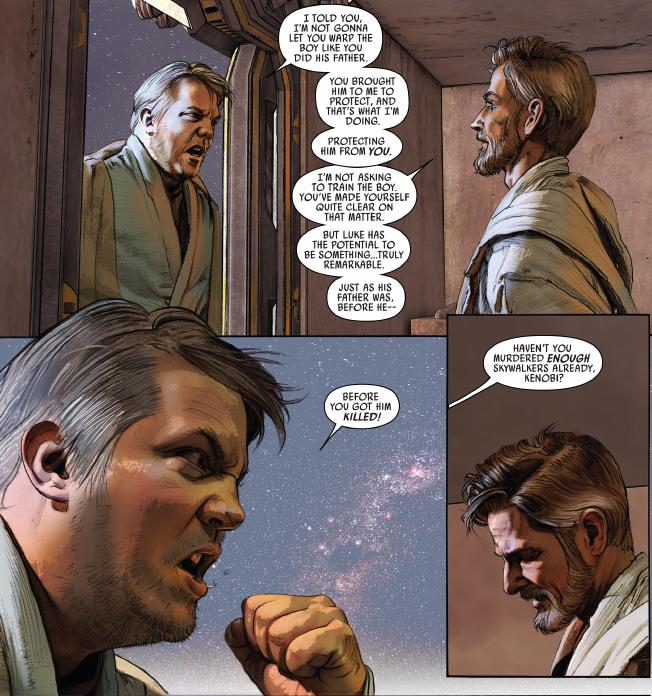 From the conversation in Episode IV and what we know of Episodes I-III we know that Owen and Beru know that Anakin is a Jedi. Or more was. What is more is that the Jedi were officially discredited and executed in Episode III.

When Owen met Anakin, he went off to find his mother (who was Owen's stepmother) and rescue her alone from a place where not even a full group of armed men managed to get her from and succeeded easily, bringing her back dead though.

If Owen knows that Darth Vader is Anakin the chances are.....low, very low. First off when Ben brought the baby he thought Anakin was dead. Probably later on he learned the truth though but admitting it or not he is very ashamed of what happened to his former pupil at that time. One can see it quite clearly in Episode III that he is hurt and ashamed at the same time. About what happened to his pupil and of his failure to teach him correctly, so that this all could have been avoided.

With that in mind it is very unlikely that months or years after he came to Owen and said "Oh and the gruesome executor the Emperor has...is Luke's father". Even taken from the non-emotional Jedi perspective it wouldn't have made much sense as in the worst case it would have made Owen unsure if it was wise/safe to still keep the baby with them or not. And wouldn't have served any further purpose there aside from that. So very unlikely.

AUNT BERU
Luke's just not a farmer, Owen. He has too much of his father in him.

OWEN
That's what I'm afraid of.

An interesting point is made in the Quora discussion linked in a comment to the original post above:

It correctly states that Beru probably doesn't know the complete fate of Anakin - however, I disagree that Owen also doesn't know. His response to her is much more grim and at the same time elusive, somewhat implying that he knows more than he's letting on. It's quite possible that Obi-Wan told him everything, but to never tell anyone else, including Beru. However, this is fully speculative.

I believe that it's certainly possible, based on the ambiguous dialogue in Episode IV - specifically the bit about Luke having "too much of his father in him" - that they knew Luke's father was a Jedi (and that Obi-Wan was his teacher), but merely think that Anakin died in the Clone Wars or the Jedi purge.

In hindsight, from the viewer's knowledge that Anakin is Darth Vader, we might assume the bit about "too much of his father in him" might mean that Owen and Beru are referring to the fact that he could turn to the dark side and be dangerous. But they also are people who specifically stayed on the farm and didn't "get involved." They might be referring to the idea that Luke will run off and get himself killed, as they believe his father did.

Perhaps Owen and Beru don't even know that Darth Vader even exists. Remember, Obi-Wan first tells Luke of the pupil he had who turned to the dark side, named Darth Vader. Luke doesn't seem to recognize the name Darth Vader, so it is possible the people of the planet Tatooine don't know or haven't heard of Darth Vader.

The Lars family were farmers and lived in remote a region, they have have only gotten galaxy news when they went into town or from passing visitors like Jawas.

15
Did Uncle Owen and Aunt Beru know who Luke Skywalker's father was?
37
Did Aunt Beru and Uncle Owen know that Obi-Wan Kenobi was a Jedi?
18
When/How does the Empire say Anakin Skywalker died?

6
Is there any evidence to suggest that Aunt Beru and Uncle Owen were killed by Boba Fett and not the Storm Troopers?
39
Why did Luke leave Owen and Beru's remains?
7
Does Padme know the name "Darth Vader"?
58
Why didn't Obi-Wan refer to Darth Vader as Anakin during the Death Star duel?
9
Did Luke know the "Chosen One" prophecy?
9
Had Luke Skywalker been adopted by Owen and Beru?
37
Did Aunt Beru and Uncle Owen know that Obi-Wan Kenobi was a Jedi?
9
What was the original relation between Luke Skywalker and his aunt and uncle?
6
Why didn't Luke know about Anakin Skywalker?