Does Hobbes ever do anything that Calvin himself could not do?

So this question got me thinking that, except for pure Calvin fantasy (i.e. Spaceman Spiff, where nothing is real), is there ever a comic where Calvin claims Hobbes did something that Calvin could not have possibly performed himself? This one comes close, but Calvin could have tied himself up

Note that we don't have to see Hobbes having done it, just that it would have been very difficult or impossible for Calvin to have done it.

A pretty compelling one is this strip, where Calvin had no opportunity to take the cookies without Susie noticing:

I also find it interesting that "real" Hobbes appears in the second pane.

Then there's this one, where Calvin would probably have some serious difficulty getting that high up a tree while holding a water balloon on his own, but more convincingly, Calvin is shown leaving the water balloon at the base of the tree before he climbs:

There's also a few where it's unlikely Calvin did something. There's the tied up one in the OP, for example. There's also this one, where Hobbes probably stole a piece of cake:

There's this one, too, which, assuming it happened as shown, would be very strange if Hobbes wasn't involved:

There's some honorable mentions as well, although I didn't feel they were strong enough to explicitly mention above. They hint at things done by Hobbes to Calvin but one could imagine Calvin doing them to himself:

But Watterson left it intentionally vague, so as with all questions related to Hobbes' existence, we can never be 100% sure.

In the examples provided, as well as every other strip that I can find, there's nothing inconsistent with a young child who has a very vivid imagination. My personal opinion is that when Hobbes does many of the things that Calvin credits (or blames) him for, Calvin is actually pretending that he's Hobbes.

The issue in the comic strips is that, when we see the "living" Hobbes, we're either seeing the other reality that nobody else sees (in which case Hobbes really is alive and is Calvin's active co-conspirator), or we're inside Calvin's imagination, in which case, how much of the rest of the scene is also his imagination? Note that the fact that it's his imagination doesn't make it any less real, but it's a subjective reality, rather than an objective one.

We don't know that Calvin didn't have the opportunity to take the cookies; he could just be very very sneaky.

I've watched children, while pretending, do things equally as elaborate to set up a simple scenario and then maintain that their imaginary friend helped them, they "flew up here," or given any of a dozen other explanations. Again - if Hobbes is real, then he helped. If Hobbes is pretend, then what else is pretend in the scene?

Simple deflection. Who's to say that Calvin didn't sneak in for a piece of cake earlier and then pretend (even to himself) that Hobbes did it.

Somebody else commented that this could just be an elaborate explanation for a wipeout. Makes sense. 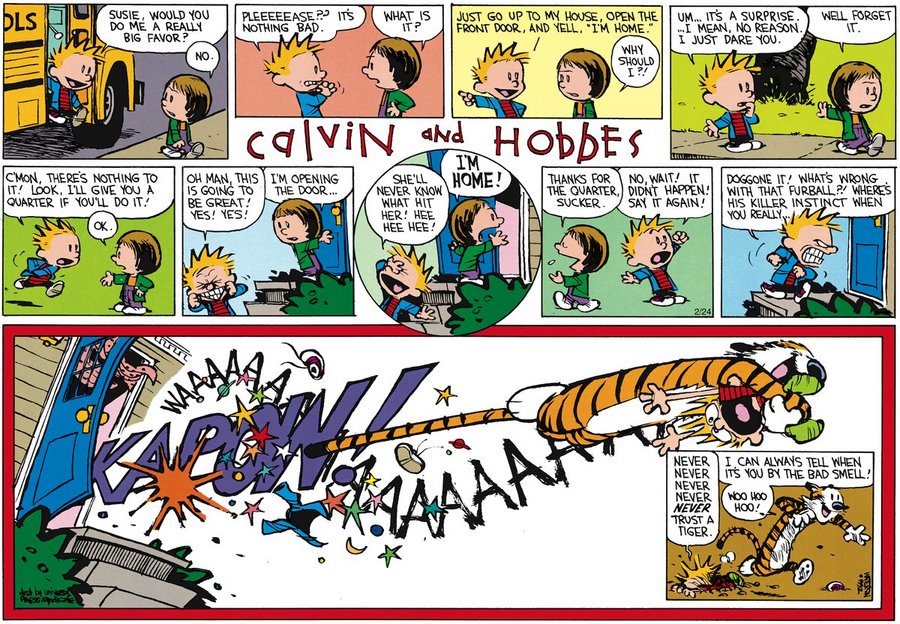 Rationalization for falling down, or what he imagined (wished?) would happen to Suzy.

Calvin could not have eaten his classmate.

In the following cartoon strip Hobbes presses the button on the outside of Calvin's Duplicator.

Given the position of the button, there's simply no way that Calvin could have pushed it himself, from inside the machine.

Yes. Hobbes unlocks the front door of the house and leaves without Calvin's mom noticing. 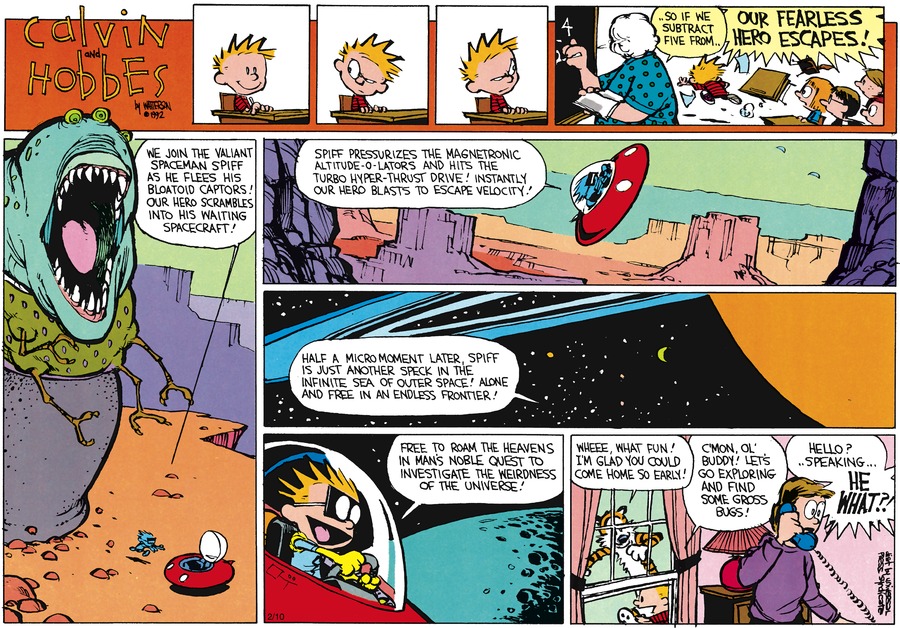 Notice the last panel - Calvin sneaks home from school and does not enter the house, as evidenced that his mother has not yet noticed him. It is strongly implied from the wording as well that Calvin has just arrived back from school and has not yet entered the house. Yet, HOBBES IS OUTSIDE.

130
Did Calvin ever realise that Hobbes was not real?
41
In Peanuts, do the human characters know what Snoopy's thinking?

31
How Does Superman Propel Himself?
11
Has Batman Ever Sacrificed himself for Superman?
130
Did Calvin ever realise that Hobbes was not real?
9
Webcomic about a robot girl able to use magic who moves to the city to go to school
11
When did Calvin get Hobbes?
8
Even with his powers, doesn't Superman train and work out?
9
Trying to find the specific issue/issue number of a Marvel comic that feature a bonus story of Dr. Strange vs. Loki