Why did the Emperor of the Daleks call the Bad Wolf entity "the Abomination"?

In the 2005 reboot of Doctor Who, during season 1 episode 13 The Parting of the Ways, both the Ninth Doctor and humankind are saved from the Dalek fleet by the Bad Wolf entity, who turns out to be...

This effectively made her a Goddess who could divide atoms themselves - although still not as powerful or dangerous as a Time Lord possessed by the Vortex would be.

On first seeing this entity, the Emperor of the Daleks exclaims fearfully:

This is the Abomination!

...before a Dalek unsuccessfully attempts to exterminate it.

However, "The Abomination" isn't listed anywhere as an alternate name for the Bad Wolf entity.

Why did the Emperor refer to the Bad Wolf entity as "the Abomination", and what does it mean?

This isn't an alternate name for the Time-Vortex soaked Rose. This is how the Emperor Dalek refers to Rose to show his disgust and hatred for her.

The Emperor Dalek is insane and thinks of himself as the "God of all Daleks" and the Daleks he gave life to are also insane and worship him as a god. When explaining how the Dalek army was created out of the "pulped" dead humans, Rose says that this makes the Daleks "half human" and the incensed Emperor Dalek then accuses Rose of blasphemy. It is at this moment, because of what she has said, that she becomes most hated and despised. 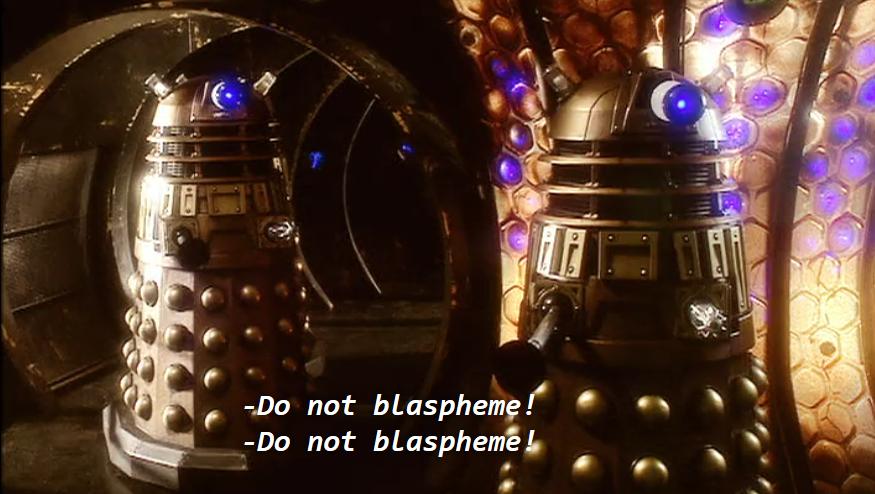 When Goldi-Rose appears later, the Emperor Dalek recognizes her as the blasphemer he despises and identifies her to his Daleks by exclaiming "This is the abomination!" and his Daleks, possibly following a predefined order to kill on sight, immediately attempt to exterminate her.

Using "abomination" to describe something hated or disgusting appears to be popular with Daleks as we also hear the Supreme Dalek use the word to refer to Dalek Caan in Season 4: Ep.12 "The Stolen Earth"

Davros: And yet Dalek Caan is uneasy

Supreme Dalek: The abomination is insane!

Davros: Show respect. Without Dalek Caan none of this would be possible.

6
Could a Time Lord become god-like being, like Rose in "The Parting of the Ways"?

42
How are the Daleks able to continually survive genocide?
13
Have the words "Bad Wolf" or "Blaidd Drwg" been seen since the 11th Doctor took over the TARDIS?
11
Did the pure Daleks survive?
7
Are "Bad Wolf" signs permanent and fixed Spacetime entities?
1
Why did Daleks invade Earth after stealing it?
9
How did the meta-crisis Doctor survive (or remain sane) when Doctor-Donna didn’t?
16
Why did The Doctor call Mickey "Ricky"?
11
Why did the Doctor think that Daleks cannot say Mercy?
12
Why didn't the Doctor become a vengeful God when he absorbed the Time Vortex?