Young adult book about a boy(?) who gets sent through a portal to another world which is really the distant future

Trying to remember a book about (I think) a boy who goes through a portal (possibly struck by lightning?).

Probably read sometime around the late 90s, but could have been written earlier.

Was either a short novel or possibly even a short story.

Would be curious if anyone can remember this. 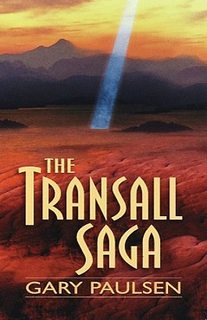 The story begins with Mark Harrison, a 13-year-old survival enthusiast, hiking through the mountainous Magruder Missile Range when he is bit by a snake and falls into a blue light. He wakes up in a strange world that he believes is an alien world with many similarities to Earth. He uses his survival skills to live off the land and, while exploring the forest, he discovers a camp made up of short, human-like creatures with webbed feet and dark, olive-colored skin. Soon he finds them too warlike to bear interacting with. He also hears a creature called the howling thing. A tribe which Mark refers to as the Arrow People allow him to live with them. He meets a girl named Leeta, whom he befriends. Soon after, he is enslaved by the Tsook, a metal-weapon wielding race of hominids. Over the next three months, he learns their language and develops feelings for Megaan, the chief's daughter. Mark attempts to flee the village, but as he is trying to escape, he learns of an imminent invasion of the village. Mark returns to warn the tribe about an impending attack, and as a gift, Mark is granted freedom and official entry into their tribe.

Mark then discovers that, despite his misconceptions earlier, this world is a ruined Earth, sometime in the future. Megaan's brother gives Mark a shard of a Coca-Cola bottle and the Merkon (leader of The Tsook) reveals the events between Mark's time and this future, also revealing that he too was sent there by the beam of light....

5
Identify book where boy transports forward in time to a future Earth
8
Book about a boy and future earth?

16
What young adult SF book is about a boy saved by aliens and domed colonies?
4
Book about a soldier who gets transported to another world
5
Young adult book about a girl pulled through a mirror by her soulmate
8
Fantasy book series about a teenage boy who develops powers and can enter another world
6
Young Adult Fiction book about a VR game that gets too immersive
4
1950s-1979 young adult novel about a boy traveling through world which turns out to be a spaceship
3
Story about a boy from a cold world, who comes to Earth through a portal
8
Young adult fantasy trilogy about a boy with healing powers and a girl who is really a dragon