Why is the deflector disc for most starships below and behind the front of the ship?

One would assume that you would want it in front of the ship. As is the case with the "USS. Enterprise NX-01" Also why is there only a front facing deflector, when the ship can travel along several different axis.

The dreadnought USS Federation "also" has a rear-facing deflector dish(!) 'In the diagram the notation on the "main sensor dish F/A" the notation (F/A)=(Fore, & Aft); on the Star Trek USS. Enterprise Original Blueprints it reads "main sensor and navigational deflector" I have always wondered about that; is there an actual explanation for this?

Because the shield are not always on??? right? or am I confusing deflectors, & shields?

Funny thing well for everyone but me. I have the technical manual, I do not remember seeing that in there.

The ship's deflector dish needs a clear line of sight along which it can project a deflection beam, hence why it needs to be at the front of the ship. Its exact placement is largely irrelevant. The deflector in the Galaxy-Class is below the saucer whereas it's right at the front of the Defiant-Class. 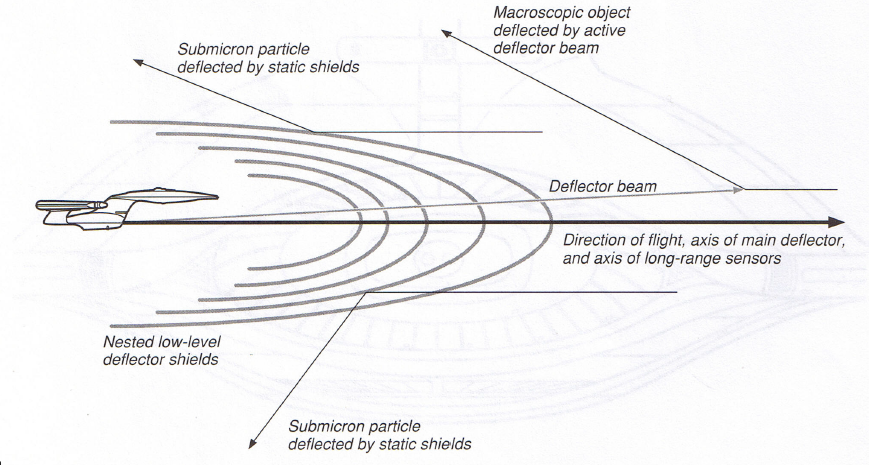 Since the navigational deflector only operates when the ship is at warp (and since the ship can only warp forward, not backward), by necessity it needs to be at the front, rather than the rear.

When the ship is at sub-light speeds, the deflector tends to be turned off and the ship's shields take care of low-speed impacts.

For the record, the USS Federation (which appears briefly as a background image in Star Trek II) also has a deflector at the front. What you've mistaken for a rear-facing deflector is in fact a secondary sensor array. 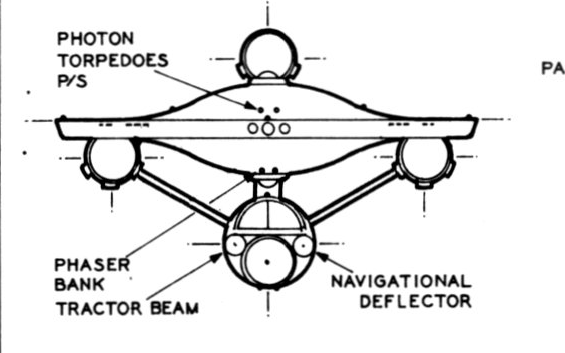 Because the saucer can detach

As per this answer, many earth-built Star Fleet ships had the ability to separate the saucer section.

This is featured most prominently in the TNG series, but dialogue in TOS indicates that the original enterprise could do it as well.

In each case where separation was possible, the saucer section did not have warp drive, so did not need a big deflector dish. It can be assumed they did have some deflection ability, and certainly had normal shields for high impulse situations.

Because the star drive section can go to warp, it makes sense for the main deflector to be attached to that section.

I suspect it may also be easier to defend from that position.

Since it is a "SHIP", applying analogies of current sea faring warships to any space faring ship, we can have the following observations:

1) Today's warships face threats from all angles, 360 degrees along the water level, and from above and below. Yet, their armor / hull is thickest at the front or the bow, near the waterline, since threats from enemies will be less common(only during war, and specifically in battle), as compared to threats from flotsam / sandbars / other waterborne objects. The latter type of threat will be encountered daily, as the ship sails on regular, non-combat duty.

2) The ship will more often than not, travel in the forward direction(the control deck faces that direction in the USS Enterprise as well), at whatever speed. Remember that today's ships can also move sideways, at a very slow speed, for navigation inside harbors. However, the dangers of waterborne objects at this speed is less, compared to dangers at any high speed whence the ship will be traveling forward.

3) As far as today's ships are concerned, there are anti missile systems (fast firing multi-barrel mini guns) installed, generally in groups of two. These face various directions (6, in a certain class of battleship / carrier totaling 12 guns, can't remember which, but read on wikipedia), and are radar guided. Why such a system was not adapted for space faring ships, is beyond me.

Also, corollary to the observations about current day ships, you may also analyze the current day soldier. Modern soldiers wear combat armor, in the form of vests. These vests have ceramic + Kevlar (maybe both, maybe either) plates which perform the task of stopping enemy bullets and other projectiles. Guess which plate is the thickest? The chest plate. There is another plate at the back, but it is not as thick as the one in the front.

Not the answer you're looking for? Browse other questions tagged star-trek deflector or ask your own question.

32
Could the original or other Enterprises' saucers separate?
14
How fast can the Galaxy class Starships go in reverse?

11
Why did flagship starships all get the name Enterprise?
10
In Star Trek, would space particles impart drag on the ship, even if moved by the deflector field?
17
What are the origin and explanation for Dax's hands-behind-the-back mannerism?
4
Which Trek character says 'Live Long and Prosper' the most?
11
Which ship has made the most first contacts?
2
Any reason why the older starships seem more resilient?
16
Why didn't Janeway ever explore the technology behind the Iconian Gateway for instantaneous travel?
8
In Star Trek, is there an upper size/mass limit to what the Main Deflector can deflect?
8
Has there ever been a warp / non-warp collision?