First, the cover has a purple alien riding a motorbike down a road at night. As I recall it's sort of squid like, and wearing biker clothes.

The two stories are:

I'd love to find the book again, or get the stories.

Keith Laumer, The Lighter Side, an anthology published in 2002 by Baen Books, includes two novels and a seven-fingered handful of short stories. 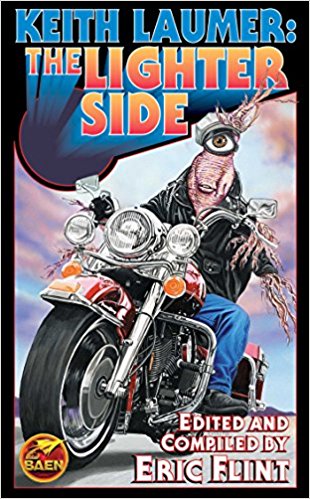 Your #1 story is the second included novel, "The Great Time Machine Hoax", where our hero, Chester W. Chester IV, owner a dilapidated circus inherits his great-grandpa's invention, the self-aware computer GNE (Generalized Nonlinear Extrapolator), and a million dollar tax bill. He and his friend Case decide to use the computer's VR capabilities to simulate a time machine, while the computer simulates a beautiful girl (Genie, of course.)

It turns out the VR is a little too good, and Chester becomes temporarily trapped in an alternate future where he is trained physically and mentally.

Your #2 is the other included novel, "The Time Trap", and begins when Roger Tyson tries to flag down a speeding motorcycle in a storm:

"Stop!" He leaped aside at the last instant as a low-slung motorcycle leaped out of the gloom, a slim, girlish figure crouched behind the windshield. He caught just a glimpse of her shocked expression as she swerved to miss him. The speeding bike went into a skid, slid sideways forty feet, and plunged off the road. There was a prolonged crashing and snapping of wood and metal, a final resounding crunch, and silence.

As the rider is dying, she passes on her message, "Beware of the Rhox!" and an earpiece that contains her personality.

The next motorcycle that comes by is the one depicted on the cover.

Not the answer you're looking for? Browse other questions tagged story-identification short-stories parallel-universe novella or ask your own question.

6
Looking for the name of a scifi comic strip from a book-for-boys book
7
Searching For Horror Anthology Book Title
4
fantasy kids book series where 3 main characters are from different worlds, have powers, and are fighting a bad guy
4
Looking for a collection of short sci-fi stories
13
Novel about a boy who gets taken to an island by a robot, the boy can control machines