Desperately searching for sci-fi book with Cube on cover; characters killed off until one couple remains

I can't stop thinking about this book but my memory won't come up with a title, author, or even character names. Help? :)

The cover had a large seamless cube sitting in a circle of sand on an alien planet. The plot involved several humanoids (maybe 5?) including a male and female from Earth and an android. There was also a military commander from a planet of war. They all just appear with no explanation of how they got there. Over the course of the book they are killed off one by one until only the male and female remain. (I was most sad to see the android go) The couple finds their way back to the cube and they solve the riddle of how to get across the sand. They are transported inside and are told that they have been chosen to travel to a new world and repopulate.

Sorry I don't remember much more than that. Thank you for any help you can give.

This sounds like Special Deliverance by Clifford D. Simak

The cover does have a cube prominent on the cover, on what could be a circle of sand (although on the computer screen it's not entirely clear that's what it is): 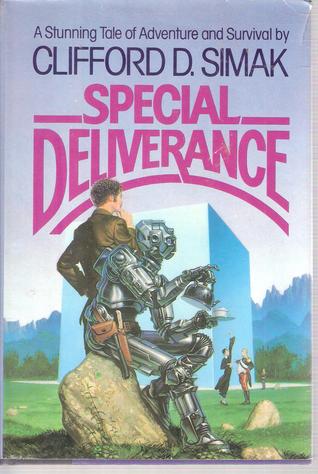 An android of some sort is pretty visible on the cover, so that's another point in its favor. The description also seems to match pretty closely to what you remember. I pull these quotes from reviews on the Goodreads page, which are more descriptive than the actual summary:

The story follows an English professor named Edward Lansing, who teaches at an unnamed but tweedy university. He lives alone, and his social circle consists of one male friend he doesn't much like, one female professor he doesn't know what to do with, and an apartment full of unread books and old records. One evening, instead of going home, he wanders into a basement room at the school and finds himself in another world.

In this new world he happens upon a small group of fellow travelers, all with equal confusion about where they are or what they should do next. They are all from Earth, but different Earths, and must work together to understand their purpose in the strange land where they find themselves. For the majority of the book, the characters work at convincing themselves that this new world has been created with some purpose; they find clues and artifacts that make them believe the randomness of their new existence has been somehow constructed and that, if they think and explore long enough, the truth will reveal itself. But always, always, is the lurking fear that this is a place that has been abandoned by sense and reason, and that there is no meaning to be had save desperation and loneliness.

Most of them, as well as the other inhabitants they meet, never find any answers. Instead they succumb to destruction and death, often seemingly voluntarily -- the ambitious leader who throws himself into the unknown, the artist who drowns herself in beauty, the automaton who gives himself to the yawning void.

And the ending you remember is revealed in another review:

Each of the several different stations is endured both as threat and temptation, and members of the party die or vanish at various stages so that only Mary and Lansing succeed at last in meeting the entities behind their pilgrimage. The two are told that have earned the right to be delivered to a world where humans have the best chance to succeed as a species. The conclusion of the novel is particularly interesting for its understated religious and metaphysical suppositions.

There's a movie called "The Cube" (I believe that's that title anyways. Been around since at least 2003 when I saw it on DVD) that sounds a lot like the beginning of the book you describe. It's a pretty interesting science fiction movie that's undoubtedly based upon a book where the main characters have to undergo a series of "trials" to escape the CUBE they are trapped inside. It is quite artistically gory and had quite a lot of interesting ways that they end up killing the "players" in the "game".

11
Looking for a particular book, and all I remember is the cover
5
Traveller sees recurring card players whose faces are masks

15
I'm looking for a sci fi book with a tribal woman, hermaphrodites, and implanting minds into new bodies
6
Trying to find a book about aliens taking over earth and making us fight with them
12
Looking for a book with two main characters and dragons in the plot
4
Sci-fi story with androids, nano-machines, robot dogs and time travel
10
70s science fiction book, with two warring planetary super computers