Thor: Which was named first, the power or the demigod?

(Forgive me, I'm not a comics expert.)

We have the enchantment by Odin on Mjolnir: 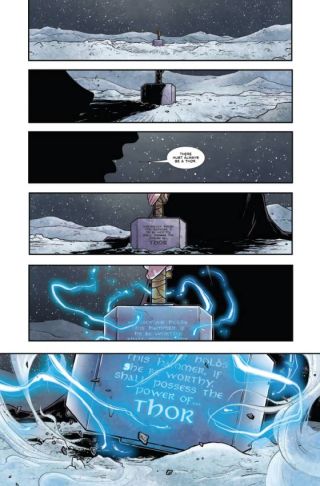 Whosoever holds this hammer, if (s)he be worthy, shall possess the power of Thor.

So that means there is a power, separate from the original Thor, called The Power of Thor that Mjolnir confers.

This is bolstered by the fact that we have the new Thor, Jane Foster who also wields the Power of Thor and goes by the name Thor.

The very short answer is that both Thor (Odinnson) and Thor ("the power of") are both named after the elemental power of lightning rather than one being named after the other.

In the Thor Annual #11 we see the events leading up to the birth of Thor. We learn that Thor was born and named long before the creation of Mjolnir and that his name literally means "Thunder", or more specifically "the power of Thunder". At a later date, Odin added an inscription to Mjolnir offering ...

"THE POWER OF THOR"

... to whomever is worthy. Odin is hopeful that his son, Thor will someday wield the power of his namesake.

For the record, in the comics it was Thor who bade the dwarves to make treasures for Odin. One of these treasures was Mjolnir.

And this panel shows that the possession of the Mjolnir (through worthiness) grants the wielder the power to control the element of thunder.

Not the answer you're looking for? Browse other questions tagged marvel thor-marvel names or ask your own question.

22
If Mjolnir was made for Thor, why is Hela seen using it in Thor: Ragnarok before it was even given to him?

52
How does Mjolnir determine 'worth'?
8
What does the inscription on Mjolnir exactly mean?
17
Is Mjolnir's spell gender-sensitive?
6
You can't wield Mjolnir unless you're worthy, but has anyone ever stopped Thor from wielding it?
9
If Thor does not hold Mjolnir, but he is worthy, does he possess the power of Thor?
22
If Mjolnir was made for Thor, why is Hela seen using it in Thor: Ragnarok before it was even given to him?