What is the significance of Chekov’s finding Moby Dick on Khan’s bookshelf in The Wrath of Khan?

Do you remember this camera shot from The Wrath of Khan?

Lethal-looking odd swords on one wall, a bookshelf; CAMERA PANS by 20th Century volumes; MOBY DICK, KING LEAR, THE HOLY BIBLE -- and a seat belt dangling with the name on it -- Botany Bay. 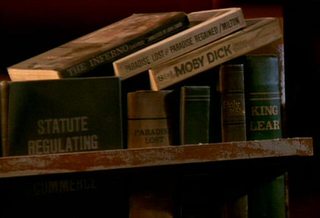 Khan has clearly read and enjoyed Moby Dick. With his dying breath he directly quotes from the novel.

Ahab/Khan: From hell's heart, I stab at thee; for hate's sake, I spit my last breath at thee."

Earlier in the film he intentionally misquotes a couple of different lines;

Khan: "I'll chase him round the Moons of Nibia and round the Antares maelstrom, and round perdition's flames before I give him up!"

Ahab: He tasks me; he heaps me; I see in him outrageous strength, with an inscrutable malice sinewing it

As to the significance thematically, it's reasonably clear that Khan sees himself cast in the role of Ahab, chasing his white whale, Kirk. Ironically he meets much the same sticky end, substituting his lust for vengeance with the conduct of a good captain and leader.

Wikipedia notes that the film's director stated (in an audio commentary) that they intentionally added a copy of the book and lingered the camera over it in order to make the parallel clear to the viewing audience.

Khan's pursuit of Kirk is central to the film's theme of vengeance, and The Wrath of Khan deliberately borrows heavily from Herman Melville's Moby-Dick. To make the parallels clear to viewers, Meyer added a visible copy of Moby-Dick to Khan's dwelling.

For a scholarly review of the other parallels in the film (some strong, others substantially more tenuous) you can read.

Moby Dick represents an obsession with chasing something - much like Khan did with Kirk.

The story of Moby Dick is often used as a way of representing an unhealthy obsession with chasing something that leads to eventual ruin. Prominently having it displayed on Khan's bookshelf is a way of drawing the viewers' attention to the similarities between it and Khan's obsessive desire to get revenge on Kirk for his defeat, subsequent exile to another planet with his people, and the deaths of his people caused by them being on the planet. It's somewhat ironic that Khan, despite reading and remembering it well enough to quote it (presuming he knows he's quoting it and it's not just a reference made by the creators), follows the same path as Ahab.

Check out this commentator's videos: http://sfdebris.com/videos/startrek/film2.php it is pretty long, but quite interesting and he reads directly from Paradise Lost, Moby Dick, and King Lear to draw parallels to Khan - and makes the point that Khan himself probably read those books several times over the years of his exile (since they were all the entertainment/escapism he had...) and coupled with his wrath, fantasized himself in the stories. So the tie-ins are both in and out of character. From the video: "Moby-Dick serves as an inspiration to our villain within the story. Its sight there shows us that Khan has had little else to do than read his few books and watch his wife and comrades perish."

The video commentator reads from King Lear the first time at about 11:00 in to part 1, but if you're interested, I really think the whole pair of videos is worth watching, he makes a lot of good points throughout and reads more extensively from Paradise Lost and Moby Dick.

12
Which Moby Dick appears on Khan's bookshelf?
7
Why does Khan have two copies of "Paradise Lost"?