How does Unity know so much about the Dreaming, vortices?

In the first volume of The Sandman, Unity Kinkaid is stricken with the "sleeping sickness," and births a daughter while asleep. At the end of the second volume, Unity enters the Dreaming, offering her life to Dream in place of her granddaughter Rose.

In that conversation, she reveals a lot of knowledge of the Dreaming that even Dream appears not to know. She informs him that she was originally supposed to be the vortex of this age, that vortex-ness can be transferred from one person to another, and that Unity, as vortex, can voluntary end the vortex. These are all things that the Lord of the Dream Realm does not himself know. 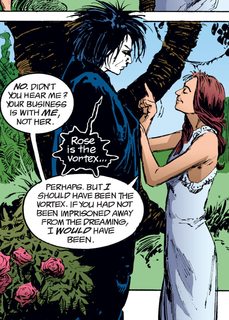 Unity telling Dream "I should have been the vortex. [...] If you had not been imprisoned, I would have been."

Dream (responding to Unity) "I do not understand." 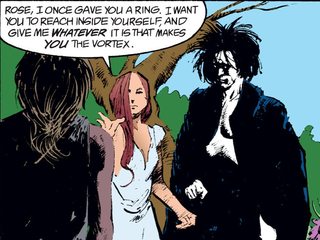 Unity asking Rose to give her "whatever it is that makes her the vortex." 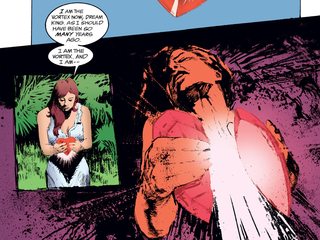 Unity saying "I am the vortex now" and breaking the heart (that represents vortex-ness).

Where did Unity learn all this information? She was asleep for most of 70 years, and only recently awoke. And where from does she get the information that escapes Dream's knowledge?

Between some of the comments on this question and a conversation with my brother, I think I have found an answer. Unity figured out the way to save Rose's life through logic, and not through access to information that the Dream King doesn't have.

Dream is reluctant to try to research and understand vortices because they are so dangerous -- he once lost a world to a vortex ("Lost Hearts" page 5). He would much rather just destroy them, and not dwell on their nature too much.

Unity, however, does care that her granddaughter lives. She understands that there can be no bargaining with Dream on this, because he will not suffer the loss of another world; therefore, Unity offers herself in place of her daughter. Although Dream doesn't understand it, Unity has a sound logical proposal for taking her descendant's place:

Unity: I want you to reach inside yourself, and give me whatever it is that makes you the vortex. Give me your heart.

Unity: Rose--I'm dying. We don't have much time. You're dreaming. Anything's possible. Just do it.

Unity also makes reference (page 13, quoted in the question) to Dream's being "not very bright" -- his issue is not missing information, as I originally thought, but an inability to reason out another solution to his dilemma.

Another support for the theory that Unity's solution was based more on logic than on privileged information is in an earlier panel (bottom of page 8), where it is revealed through narration that Unity "finally understands" the Dreaming.

Or, as Radhil put it (albeit with fewer sources):

Dream doesn't appear to have peered too closely into the full natures of the vortex, given that his hesitance to just end them created disaster in the past. As for why Unity knows what to do... dream-logic

8
How much of *Fables* should be read before starting *Fairest*?
8
How will Death of the Endless die?
4
How did Mazikeen end up with Lucifer at the “Lux”?
8
Why is Desire (almost) always portrayed as a villain?
11
Did the other Endless know that Dream was held prisoner?
4
What does the boy mean by “the other egg of the Phoenix”? Which one is it?
7
Did the duke's daughter dreaming of goblets of sour blood have any influence on Vassily's decision?
4
What does the Cuckoo represent?
4
Why does Orpheus know how to find Destruction?