I thought "Tesseract" was in the title, but that may have been the entity's name. It basically forces all the countries to decrease their military, turning the UN into a world government. To prove its power, at least one city (Tokyo, London?) is destroyed. The 2nd half of the book is us landing on another world with a docile species. Our interaction creates conflict, which is what the entity wanted.

Read at least 10-20 years ago, possibly longer. I don't know author or title. Anyone?

There is a 1988 novel called Tesseract by Joseph Addison: 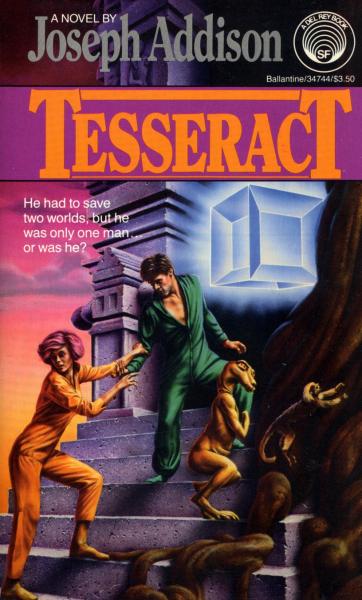 The Encyclopedia of Science Fiction says about Joseph Addison:

Scottish-born author resident in Canada whose only novel, Tesseract (1988), perhaps over-complexly explores various dimensions in Time and space, the eponymous AI serving to help the protagonist of the tale decide which Alternate World available to him will offer a chance for Homo sapiens (plus another race) to avoid mortal Disaster.

Here is an Amazon customer review:

Compelling if paradoxical, "Tesseract" is a story of what ifs. It is an easy read that follows the journey of Mark Johnson, an unwilling protagonist caught between what if and what could be. The human race is poised on the Eve of Destruction. Nuclear powers have become more antagonistic. The world is on the brink so often hypothesized during the Cold War Era. But the human race is needed to prevent the extinction of two species; themselves, and the intelligent beings of the planet Aeos. And Mark Johnson is the answer. Without him, both worlds won't last long and it took searching the galaxy by an intelligent, massively powerful construct called the Tesseract to find the key to salvation for both. "Tesseract" delves into the potential of choice. The whats that can happen if you choose to act or not. It is interesting to visualize the choices laid out before Mark Johnson and to follow his journey beyond self discovery to the ability to save not only his own world, but another as well.

"Tyson's Folly, Manhattan's newest building, was a windowless cube, an impenetrable fortress dwarfed by the taller structures of midtown. Even among escalating world tensions, people took time to speculate about its purpose. Then Mark Johnson, a young exec in Tyson's financial empire, was summoned to Tyson's Folly. His new assignment was an unusual one--somehow in that multi-dimensional cube, it was his mission to save two civilizations from destruction--not something his degree in Business Administration had prepared him for."

11
Looking for a fantasy love story with time travel
13
Novel where flying through rainbow results in time travel
13
Looking for a time travel fantasy/scifi novel from the late 80s/Early 90s
9
Young man flees across a continent whose inhabitants are overthrowing his people
11
Looking for a specific novel about aliens and toilet paper time travel
12
SF novel about one-way scientific expedition to inhabited planet, where telepathic aliens "talk" sort of ++like this++ and ~*~this~*~
15
Novel about an alternate history where there was no World War II, maybe involving time travel
6
Polar-dwelling youth finds an offplanet bride, but she dies, but he adopts exiles as his tribe