Short story about an evil potato outdone by magic roots

Many years ago, my grandmother recorded a cassette tape for Halloween in which, among other things, she read an odd story. Presumably it was from a collection of stories, though I never knew where it came from.

The story involves a farm family, a witch, and a giant evil potato. The potato shows up and eats the father (and probably the mother). The children, I believe they were all daughters, beg a local witch for help. The witch gives them each "roots." The first two return and try to fight, but the roots plant them to the ground and they get eaten. The youngest hugs the potato instead, and the roots entangle it and kill it, rescuing the family.

Some exact quotes I remember:

I've tried looking it up but can find nothing. Despite listening to the tape many times as kids, nobody else in my family remembers it at all and thinks I'm making it up. Does anyone know what this is or where it came from? 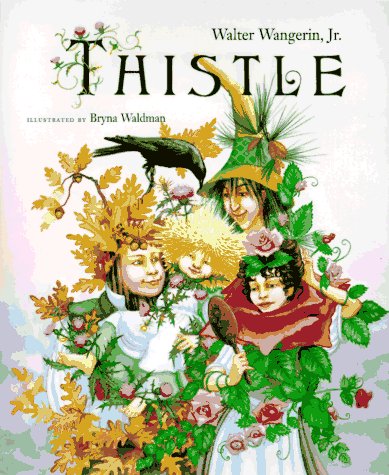 Of all the potato farmer's children, only gentle Thistle can stop the terrible potato monster from destroying them.

The first few pages from the book are in this excerpt, which includes the quote you remembered:

"I'm hungry! Good wife, I am hungry and ready to eat. Let's have potatoes!".