I am trying to find a sci-fi story I read in early 1980s sci-fi anthology. It was told from the perspective of snake/devil hiding from a megolomaniac God. Any leads much appreciated. It was written in the first person, from the view point of Satan. I remember him as a snake, hiding from a mad God who has convinced the world that light and sound are necessarily good and darkness and quiet are bad. It's kind of a rumination - I don't recall any actual action.

This answer was written before the querant added that they remember the devil as being a snake. They have indicated that the following story is not what they were looking for.

Could this be the short story "Displaced Person" by Eric Frank Russell?

The narrator meets a strange person while sitting on a bench at the setting of the sun.

He glided out of the gathering dusk and seated himself at the other end of my bench and gazed absently across the lakes towards the Sherry Netherland.
(...)

My mind speculated about him the way minds do when momentarily they've nothing else to bother them. A European refugee, it decided. A great surgeon or sculptor or something like that. Perhaps a writer, or painter. More likely the latter.

The stranger confides that he is a refugee.

"You're not a native of this New York?" I prompted.
"No." Resting long, slender hands upon his stick, he gazed meditatively forward. "I have no country. I am a displaced person."

"In these days it is an all too familiar story," he said. "A leader became so blinded by his own glory that no longer could he perceive his own blunders. He developed delusions of grandeur, posed as the final arbiter on everything from birth to death, and thereby brought into being a movement for his overthrow. He created the seeds of his own destruction. It was inevitable in the circumstances."

(...)
"I organized that opposition. I still think it was justified. But I dare not go back."

Then he gets up to leave.

"My name," he murmured softly, "is Lucifer."

According to the ISFDb, it was published first in the September 1948 issue of Weird Tales and has been collected in a number of anthologies which can be found through its entry in the ISFDb.

This has been confirmed as Harlan Ellison's story "The Deathbird". Published March, 1973

The wise and gentle snake-like creators of the Earth lost a galactic arbitration, and possession of the planet passed from their race to the Mad One. The sole caretaker left behind was Dira, the Snake, powerless to defend himself from the slurs and myths of the other. Yet he had the final remedy, to be used only at the end, the Deathbird.

This is an emotionally powerful story that examines, among other things, terminal illness and assisted suicide. The decision to call the Deathbird lies with the man Stark, who has been reincarnated through the ages, and not with the Snake or the mad one. Nathan Stark remembers his last life, and his mother, dying in great pain, demanding that he "Use the needle." And now the Earth is in pain... 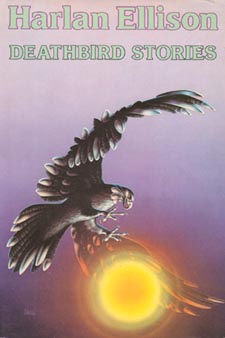 15
Last man on Earth walks with the devil

15
Story where the protagonist is turned off from an automated system of professional attribution and instant learning
7
Short story: God and the Devil watching the average life of John Smith
6
Trying to find a Sci-Fi Short Story called “Sarge”
13
Man sheds skin like a snake, due to snake-bite; makes face-masks
30
Short story where God has died, and the Devil offers to keep Heaven “in business”?
13
Trying to find a sci-fi short story about humans accidentally eating “hibernating” plant people
4
Satan/Devil Short Humorous Story
5
Children's story (semi-related set of stories) featuring a motorized bedstead