Did the Doctor knowingly kill an innocent being?

At the end of S02E06 of NuWho, The Age of Steel, the Tenth Doctor and his companions are clinging to John Lumic's Zeppelin via a rope ladder as they escape from the Cyberman Factory.

Moments before, Mickey had disabled all of Lumic's Cybermen's emotional inhibitors, causing (most of) them to self-combust as they became overwhelmed by their emotions.

A surviving Cyberman manages to climb onto the rope ladder and starts to climb it, before the Doctor throws his sonic screwdriver to Pete Tyler and tells him to use it to melt the rope below him, causing the Cyberman to lose its footing and fall to its death.

Because this Cyberman's emotional inhibitor had been disabled, it's likely that it had reverted to being a human being in a Cyberman's suit, with all of its previous memories and experiences, just like Sally Phelan earlier in the episode. This seems evidenced by the Cyberman's very human-like screams as it falls.

Because of this reversion to its harmless human state, it's likely that this Cyberman meant no harm to the Doctor and his companions, and was simply trying to climb aboard to safety just as they were.

Did the Doctor knowingly kill an innocent human being?

No, he killed Lumic, the man behind it all.

We can tell it's him because of the eyes. Here's Lumic in his chair earlier, after his conversion (picture taken from the BBC website): 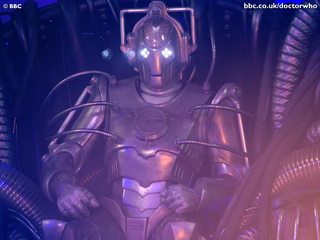 And here's the Cyberman that tried to follow them up the ladder (pictures taken from this video): 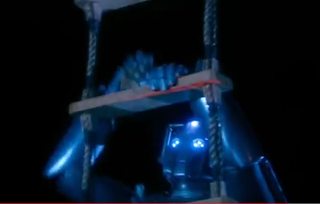 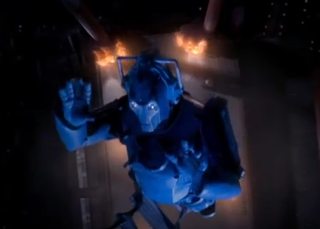 Normal Cybermen have dark eyes, not glowing ones. This is Lumic.

Also, technically it was Pete who killed him, not the Doctor - the Doctor was just an enabler, giving him the sonic to cut the rope with.

The cyberman who climbs the ladder is John Lumic.

Lumic is hardly an innocent human being.

As far as I remember, they didn't reach all Cybermen with their signal. Post this episode Mickey, Pete, and the others set out to free the rest of the world.

This becomes an important plot point in a later season (avoiding spoilers).

20
When does the Doctor cease being President of Gallifrey?
5
Why does River Song save the Doctor in Let's Kill Hitler?
2
Why did Torchwood have the ghost shift lever?
7
Did the Doctor know that he couldn't regenerate during the events of "Let's Kill Hitler"?
26
Has the Doctor ever knowingly interacted with his current incarnation
4
Why did The Doctor (Doctor Who) have matches in his pocket?
0
How come the Cybermen still want to upgrade humans in The Doctor Falls?
4
How did the Doctor escape being stranded in space in the original script for "Four to Doomsday"?