I wonder whether his memories survived. I mean, can he recall the events prior to his (temporary) death on Nova, maybe after he is old enough to stop being a baby? Anything even from the comics?

TL;DR: No, Groot's memories did not survive.

In July 2016, producer Kevin Feige previously said that Groot would retain his memories

He remembers. He’s not mentally a baby, he is still Groot… I sort of equate it to Spock circa the end of Search for Spock and The Voyage Home.

However, in September of the same year, director James Gunn flipped on that during a Facebook Q&A.

When asked specifically about Groot having his memories, he replied,

No. He has no memories of adult Groot. 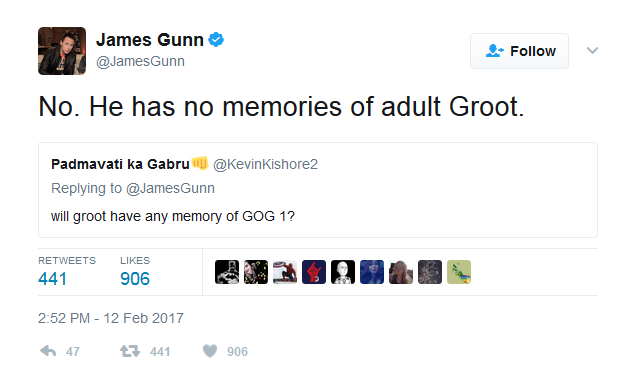 Additionally, back in October 2016, Vin Diesel all but said that Groot would not have his memories, explaining that he has to "start all over" and re-learn everything.

“Yeah, there is a difference. He couldn’t be more naive as Baby Groot. I always think of the Groot that we saw on the first Guardians as a college-level Groot, so he’s not fully grown yet, but he’s a man. And once he sacrifices himself at the end of the movie, now he has to start all over, so to speak, but we’re gonna see this goofy, adorable, baby Groot thing running around the screen and just learning as he goes.”

So why no memories?

On May 14, 2017, James Gunn did a Facebook Q&A. Someone asked about Groot. It's possible that Gunn was just being coy, but he casts doubt on whether or not Groot from Guardians 2 is the same Groot as the one in Guardians 1.

Colby Helton · 2:22 You mentioned Baby Groot doesn't retain memories from the first film, but what makes Groot the same Groot? What's his connection to GotG? Does he retain some emotional essence or is her just a baby?
James Gunn · Who said he was the same Groot?

On February 27, 2018, James Gunn finally put the issue to rest declaring that the Groot of Volume 2 is the son of Groot from Volume 1

First Groot is dead. Baby Groot is his son.