Was the first Nite Owl pro- or anti-Dr. Manhattan?

In Watchmen (2009), during Dr. Manhattan's flashback scenes, he mentions the retired Nite Owl and his book, in which Dr. Manhattan's arrival was described as the "dawn of the superhero," and he says he's not sure what that means.

Was the old superhero appreciating Dr. Manhattan, or was he against him in that book?

The original Nite Owl's feelings about Dr. Manhattan are complicated.

Firstly, Nite Owl acknowledges Dr. Manhattan's and Watchmen's superiority when it comes to fighting crime. This is seen in the prequel comic series, Before Watchmen: Minutemen (which is narrated by Hollis Mason), issue 6: 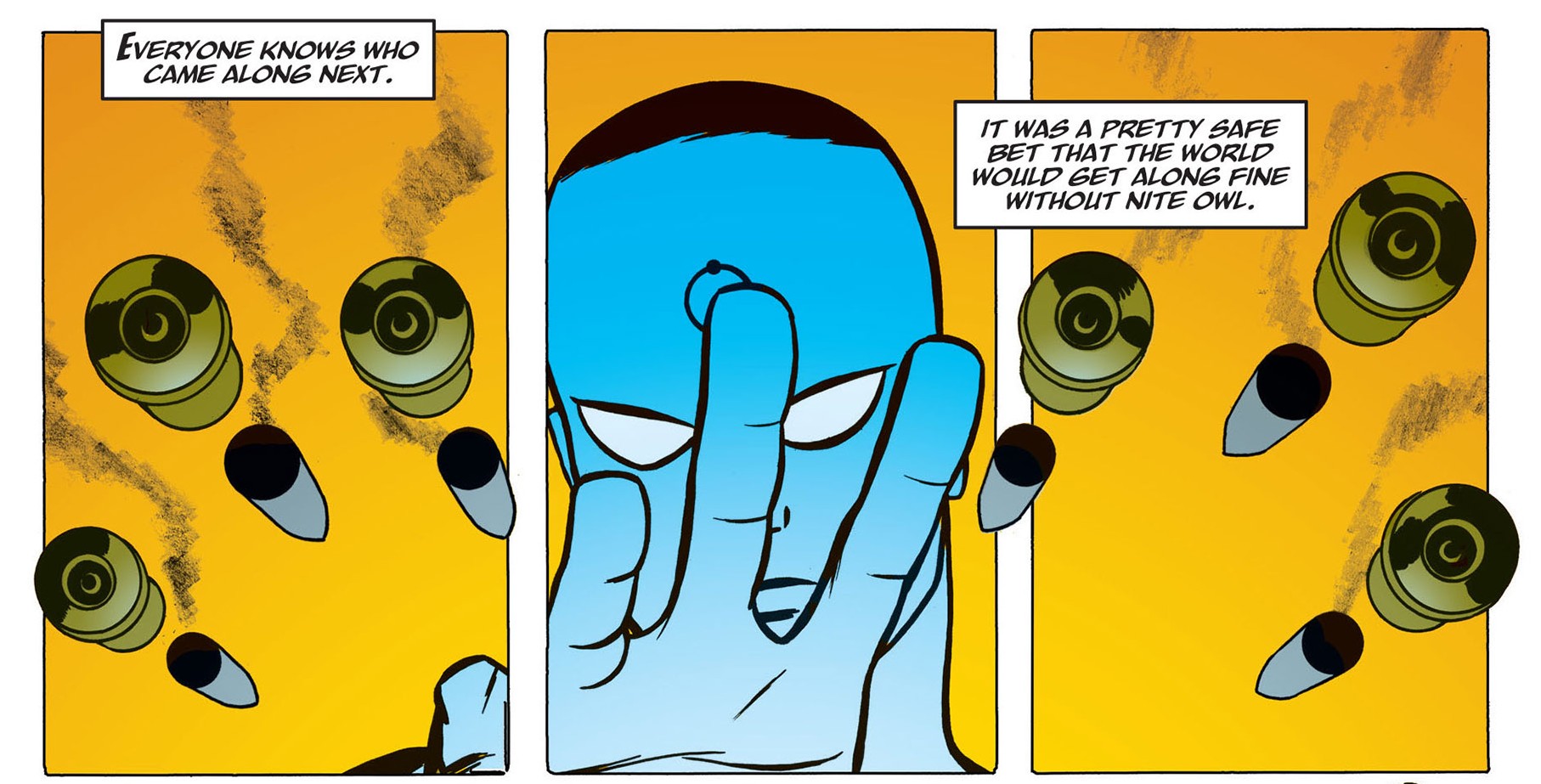 And this one is from Alan Moore's Watchmen #4:

One could argue that Hollis could feel bitterness and some tingles of anger towards Dr. Manhattan here, since the scientific progress the latter induced will potentially take away one thing Hollis is passionate about now - the cars he fixes; however, the comic does not elaborate on that.

But you can also see that Nite Owl acknowledges that he cannot grasp the concept of Dr. Manhattan. Them coming from different generations, and having completely different ideals and mindsets, it's no wonder Mason has a hard time accepting Dr. Manhattan as reality.

In Minutemen #1, Nite Owl clearly says that Dr. Manhattan had toppled his perception of the world:

There's actually a panel in Minutemen #5 where Nite Owl says he felt a "vague disdain" for Dr. Manhattan - in this case because of the injustice. A boy whose hand he is holding on the panel had sacrificed his life to hold a sphere surrounding a ball of plutonium open - otherwise it'd reach critical mass and go boom (that's a real thing, and an interesting read).

The thing is, the sphere closed for a second, and the boy received an enormous dose of radiation - so he died a horrible death; while Dr. Manhattan forgot his watch, got disintegrated, and became a god. Sure, those two are not the same, but for Hollis they are. 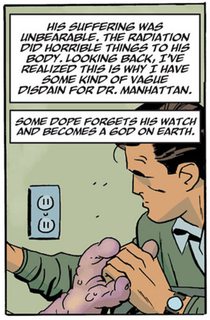 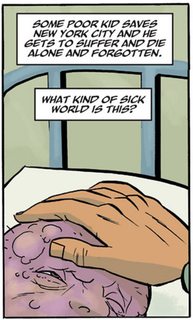 But you say "that book", meaning the original Watchmen, written by ALan Moore (none of the prequels were written, or even approved by him). Original Watchmen featured some excerpts from Hollis Mason's autobiography, Under the Hood. In Watchmen #3, in chapter V of Under the Hood, Mason discusses the dawn of new heroes and Dr. Manhattan in some detail:

The arrival of Dr. Manhattan would make the terms "masked hero" and "costumed vigilante" as obsolete as the persons they described.

While [the feeling] is hard to define precisely, if I had to boil it down into three words, those words would be, "We've been replaced." I'm not just talking about the non-powered costumed hero fraternity here, you understand, although Dr. Manhattan's appearance was certainly one of the factors that led to my own increased feelings of obsolescence and my eventual decision to quit the hero business altogether.

[...] I personally found Dr. Manhattan to be a little distant. Maybe that was more my fault than his, though, since I found it very difficult to feel easy around the guy, even once I'd got used to the shock of his physical presence.

Thus I conclude that Nite Owl did not feel hatred or contempt toward Dr. Manhattan. What he felt was some sort of respect, but mostly helplessness and incomprehension, and himself being an anachronistic remnant of a time now past.

Not the answer you're looking for? Browse other questions tagged dc comics watchmen or ask your own question.

29
Why was Dr. Manhattan blue?
18
Was Dr. Manhattan able to travel through time?
19
Why did Jon Osterman never contact his father?
8
Was Dr. Manhattan actually time blinded by tachyons?
21
Why did Adrian Veidt choose such an obvious password?
31
Why does Dr Manhattan work for the US government?
11
Are there any other DC characters mentioned in the Watchmen universe (prior to the Doomsday Clock crossover)?
11
Comic book identification - lost astronauts, pocket watch, alien civilizations
16
What was the Comedian's motivation for fighting crime?
8
What was the extent of Howard Stark's involvement in the Manhattan Project?