Why did Worf switch to red in DS9?

I'm under the impression that Worf's uniform change from gold to red was due to accepting the Strategic Operations Officer position aboard DS9 but I thought red was for those on the command track, not operations, and it would seem that coordinating "strategic operations" for Starfleet would be an operations position.

What about this particular position change prompted the uniform change? Or was there another reason for the change unrelated to his new job title? 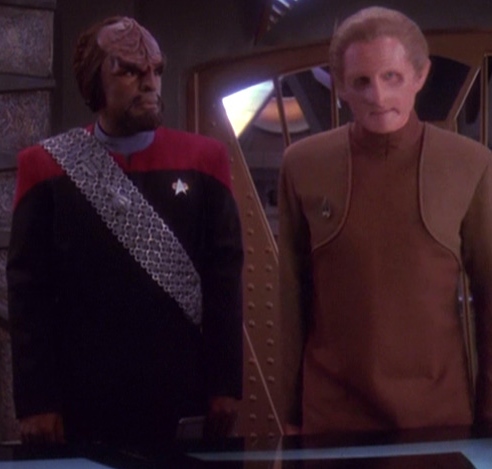 Although the names are superficially similar, one is a Command role and the other is not.

The original screenplay from "Way of the Warrior" makes it abundantly clear that he's moved back into a Command-track role.

Close on Worf, as he steps out of the turbolift. He's now wearing a Deep Space Nine jumpsuit in Command red, along with his usual sash.

O'BRIEN: You look good in red.

WORF: It feels good. But I have much to learn about Command.

O'BRIEN: (re: Sisko) Well, you couldn't ask for a better teacher.

You're right to infer that it's related to taking on a different role, that of Strategic Operations Officer (That is essentially spelt out in the transcript others have provided) and that that role falls under the Command division. As @Valorum points out, the mere fact that the position contains the word operations doesn't make it an Operations role.

The word you should be concentrating is strategic. In some respects strategy is the defining feature of what Command does.

The terms tactic and strategy are often confused: tactics are the actual means used to gain an objective, while strategy is the overall campaign plan, which may involve complex operational patterns, activity, and decision-making that govern tactical execution.

That is not run of the mill Operations which essentially means the branch responsible for making things happen and keeping things running.

I would also note, the Operations in Strategic Operations may be in the sense of a military operation. In other words, he works on operations (actions) of a strategic kind (i.e. not strictly military). That may include actions of a Special Operations nature:

In fact, on a number of occasions, we have specifically seen Worf involved in planning and executing special ops.

Worf enters in red shouldered DS9 uniform and his sash)

SISKO: Well, you all know our new strategic operations officer.

O'BRIEN: You look good in red.

WORF: It feels good. But I have a lot to learn about Command.

We can infer from the dialog that the strategic operations officer was considered a command position.

In Worf's job as strategic operations officer he coordinated all Starfleet activity within the sector. We see Worf doing several traditional command roles including:

It was a command position because he was coordinating activity a vast and strategically important area. You can see that he was regularly meeting with captains, admirals, and ambassadors in his role.

Not the answer you're looking for? Browse other questions tagged star-trek star-trek-ds9 worf star-trek-uniforms or ask your own question.

21
Why is Data's uniform gold and not red?
15
Is Worf still an ambassador?
17
Why is Worf always called by one name?
10
How did Worf's adoptive father know O'Brien's rank?
62
Has any Star Trek character appeared in all three division uniform colors?
20
In Star Trek, what are all the low-ranking Command Division officers doing?
11
Why did DS9 need a Science Officer (pre-wormhole!)?
19
Why did Worf wear red in TNG Season 1?
9
In Star Trek TNG, what is the division of authority between the first officer and operations officer?