What's the worst thing anyone could do in a fast-food restaurant?

In Johnny and the Bomb (chapter 8) Terry Pratchett writes this:

Sir John sat down heavily in a seat, motioned them to sit down as well, and then did the second-worst thing anyone could do in a fast-food restaurant.

He snapped his fingers at a waitress.

All the staff were watching them anxiously.

‘Young lady,’ said Sir John, wheezing slightly, ‘these people will have whatever they want. I will have a glass of water. Thank you.’

‘Yes, Sir John,’ said the waitress, and hurried away.

We learn that Sir John gets away with this because he's the billionaire owner of the entire burger franchise.

But I feel like I'm missing a joke here. Perhaps I'm bad at British humour. What's the worst thing anyone could do in a fast-food restaurant, the single thing that's worse than snapping your fingers?

I looked in the Annotated Pratchett File, but this joke isn't explained.

I think you've answered your own question. Snapping your fingers at a waitress is very nearly the height of bad manners but jumping the queue is quite literally the worst thing that anyone can do and something that deserves its own circle in hell.

Per WATCHING THE ENGLISH, The Hidden Rules of English Behaviour by Kate Fox

But calling out to him is not permitted, and almost all other obvious means of attracting attention, such as tapping coins on the counter, snapping fingers or waving are equally frowned upon.

that there is a special code of etiquette governing the behaviour and speech of pub ‘regulars’ (regular customers of a particular pub), which, among other privileges, allows them to break the pantomime rule. The special code does not, however, allow them to jump the invisible queue – as this would violate the over-riding English rule about queuing, itself a subsidiary, it would seem, of a more general rule of Englishness about ‘fairness’ 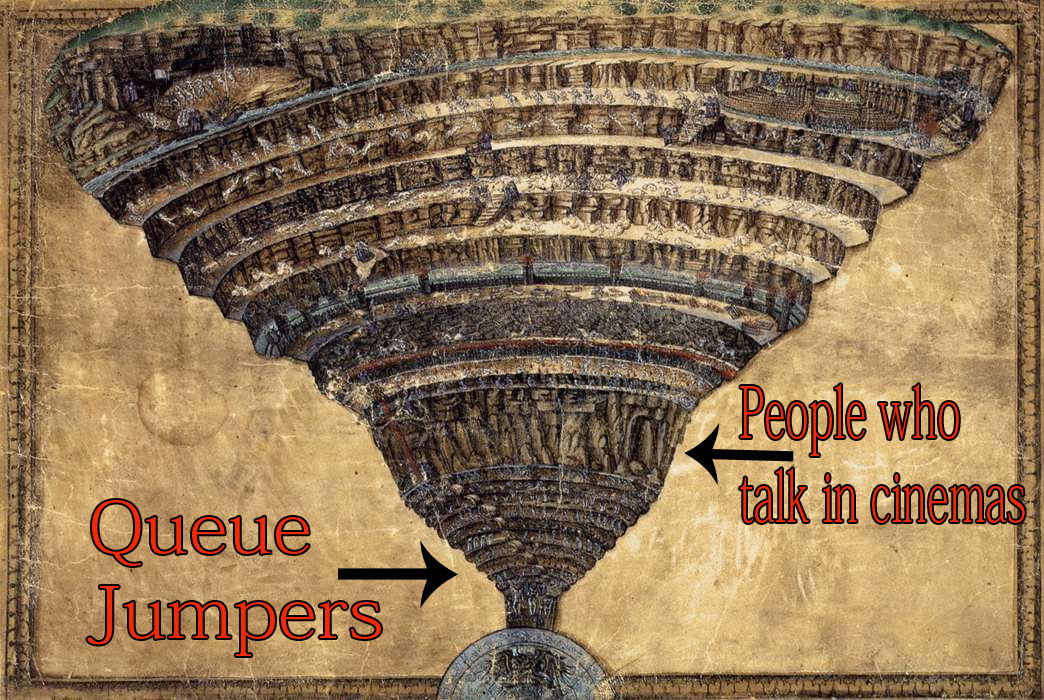 Maybe I've read too much Pratchett and Adams in my life, but to me seems simply one of their typical jokes.

More or less every book ever written has some instance of "the best thing", "the worst thing", etc. (just think that Apple entire advertising is based on that trope), here the joke is that he did "the second worst". It is a joke on the constant abuse of the same trope over and over again in literature, and it is something really typical for Pratchett.

Not in my opinion, but I get the feeling some people would say the worst thing you can do in a fast-food restaurant is to eat. Notice he only gets a glass of water for himself, and doesn't touch the sandwich he orders.

‘You haven't touched your One with Everything,’ said Johnny, watching him.

‘Oh, I asked for it just to make a point,’ said Wobbler. ‘I'm not allowed to eat them. Good heavens. I have a diet. No sodium, no cholesterol, low starch, no sugar.’ He sighed. ‘Even a glass of water is probably too exciting.’

The other suggestion of cutting the line is a good interpretation but in my opinion it's bundled together with his original finger snapping. That is to say, sitting down, summoning an employee, ordering like it was a full-service restaurant and there by cutting of everyone else waiting are all different parts of one rude behavior.

If you were to ask this question in Chicago, the answer you'd get 99 times out of a 100 would be "put ketchup on your hotdog."

Everyone has their "this is the worst thing you can do in a restaurant" and to suggest that something else is, in fact, the worst thing is to invite argument and dissent, distracting from the point that the author is trying to drive home. Whether it's the worst thing or only the second worst isn't the issue, it's just how horrible of a thing to do this is that is being pointed out.

Aside from leaving the reader to imagine for his or herself what the number one most important thing to do is, this is also a bit of a trope in comedy. This is a Google search for "second worst thing" and you can see that the results are many and quite varying in nature, but they all do have a bit of a common theme amongst them. It's a mix of dry humor and witticism. It's somewhat thinking outside the box (debatable how much so since it is somewhat of "a thing" to use this expression), and is kind of funny.

Yes, an exercise left to the reader. In many American fast-food establishments, the staff will tell you that the worst thing is using the restroom without buying anything. Some customers will say changing a baby's diaper on one of the tables. Pratchett likely had other answers in mind.

Using 'the second worst thing' is a literary trick used to elicit questions such as yours, i.e. 'what is the worst thing?'

By the way, Simon Fraser, we do have table service. I'm not entirely sure what restaurant you visited.

9
What were Saruman's most despicable deeds, and which is the worst?

18
From what Star Trek episode did Wobbler learn of the grandfather paradox?