From what Star Trek episode did Wobbler learn of the grandfather paradox?

In Terry Pratchett's Johnny and the Bomb, chapter 9, Kirsty tries to explain that Wobbler couldn't come back to the future with his friends because he changed history and accidentally killed his own grandfather.

Wobbler gave them a suspicious look.

‘What kind of snag?’

Wobbler stopped eating. It was that serious.

‘Er. You're not going to be born … er.’ Wobbler stared at him. Then he stared at the half-eaten burger.

‘Am I eating this burger? Are these my teeth marks?’ he demanded.

‘Look, it's perfectly simple,’ said Kirsty. ‘You're alive here, yes, but when we first came back, something must have happened which changed history. Everything anyone does changes history. So there's two histories. You were born in one, but things have been changed and when we got back it was into a different history where you weren't. All we have to do is put things back the way they should be, and then everything will be all right.’

‘Hah! You haven't got a shelf of Star Trek videos as well, have you?’ said Wobbler.

Was Wobbler thinking of a particular episode (or film or other story) of Star Trek here, one that has similar trouble with time travel and the dangers of changing the past?

The dialog about time travel in chapter 1, which foreshadows much of the plot, may also be relevant:

‘But you can't travel in time without messing things up,’ said Yo-less.

‘That's the whole point,’ said Bigmac. ‘That's what you want to do. I wouldn't mind joining the police if they were time police. You'd go back and say, “Hey, are you Adolf Hitler?” and when he said, “Achtung, that's me, ja” … Kablooeee! With the pumb-action shotgun. End of problem.’

‘Yes, but supposing you accidentally shot your own grandfather,’ said Yo-less patiently.

‘I wouldn't. He doesn't look a bit like Adolf Hitler.’

‘Anyway, you're not that good a shot,’ said Wobbler. [skipping the anecdote about Bigmac]

‘I didn't mean actually shooting your actual grandfather,’ said Yo-less, loudly. ‘I mean messing things up so maybe you're not actually born or your time machine never gets invented. Like in that film where the robot is sent back to kill the mother of the boy who's going to beat the robots when he grows up.’¹

‘Good one, that,’ said Bigmac, strafing the silent shops with an invisible machine gun.

‘But if he never got born how did they know he'd existed?’ said Yo-less. ‘Didn't make any sense to me.’

‘How come you're such an expert?’ said Wobbler.

‘Anyway,’ said Yo-less, ‘if you changed things, maybe you'd end up not going back in time, and there you would be, back in time, I mean, except you never went in the first place, so you wouldn't be able to come back on account of not having gone. Or, even if you could get back, you'd get back to another time, like a sort of parallel dimension, because if the thing you changed hadn't happened then you wouldn't've gone, so you could only come back to somewhere you never went. And there you'd be – stuck.’

They tried to work this out.

‘Huh, you'd have to be mad to even understand time travel,’ said Wobbler eventually.

¹ The Annotated Pratchett File tells which film Yo-less mentions in this line.

The crew travels to the past, and John Christopher, a US Pilot from the 1960's who accidentally sees the Enterprise, is brought on board. The crew intends to return to the future with him, but decide they can't, because his son (who is very important in terms of the timeline) hasn't been born yet:

SPOCK: Poor choice of words on my part. I neglected, in my initial run-through, to correlate the possible contributions by offspring. I find, after running a crosscheck on that factor, that your son Colonel Shaun Geoffrey Christopher headed, or will head, the first successful Earth-Saturn probe, which is a rather significant

CHRISTOPHER: Wait a minute. I don't have a son.

MCCOY: You mean yet.

CHRISTOPHER: A boy. I'm going to have a son. 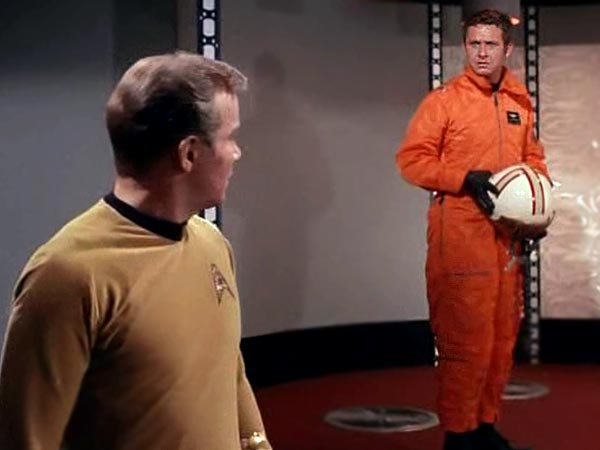 Given that we're talking about Star Trek tapes (meaning non-canon could apply here), there was an Animated Series episode called Yesteryear from 1973

As the travelers begin to appear, one-by-one, Kirk announces to McCoy how exciting it was to observe the birth of a civilization, just as the last traveler, Spock, emerges from the Guardian, much to the surprise of both Grey and McCoy. McCoy inquires who it is they brought back with them. Although Kirk reacts with puzzlement because he believes McCoy obviously knows Spock, McCoy says he doesn't.

Spock then recalls the date of the event in question, the twentieth day of Tasmeen, noting that it was the day that his cousin Selek saved his life in the desert when he was attacked by a wild animal. Although Spock cannot remember the finer details of the event, he recalls that that was also the only time he had ever met Selek.

On a hunch, Kirk asks if Selek looked anything like how Spock now does. Spock confirms what Kirk has been thinking; Spock saved his own life in the original timeline, but was unable to do it a second time because he was in Orion's past when the time vortex replayed Vulcan history, making it impossible for him to be in two places at one time. With the realization of what has transpired, Kirk asks the Guardian if there is any way they can reverse what happened. The Guardian confirms that there is, as long as no other important factor is altered.

The tape in question could be a reference to "City on the Edge of Forever", in which Kirk, Spock, and McCoy, at the first discovery of the Guardian of Forever, are transported back to Earth, ca. 1933, and Kirk saves the life of Edith Keeler (and falls in love with her, of course) -- before Spock discovers that they have somehow, inadvertently, wiped history of the Federation in its entirety, and traces the change to Edith Keeler living beyond the time of their arrival in the past.

This is "grandfather paradox" writ large -- the simple act of keeping a stranger from being run down by a car changes three centuries of history into an unrecognizable form.

Not the answer you're looking for? Browse other questions tagged star-trek episode-identification terry-pratchett johnny-maxwell johnny-and-the-bomb or ask your own question.