What types of dragons are there in Middle-Earth and how and why do they differ?

The question is pretty simple and explained by the title.

The first Fire-drake to issue from the gates of Angband was Glaurung, he was said to have sired the other fire-drakes and they are also the most common.

Again after a hundred years Glaurung, the first of the Urulóki, the fire-drakes of the North, issued from Angband’s gates by night.
The Silmarillion

At last Dáin I, together with Frór his second son, was slain at the doors of his hall by a great cold-drake.
Return of the King - Appendix A

Some of the Dragons were wing-less, such as Glaurung, these were often described as worms came in two types, the long-worms and were-worms

“Of his son, Fram, they tell that he slew Scatha, the great dragon of Ered Mithrin, and the land had peace from the long-worms afterwards.”
ibid.

The only mention of were-worms comes in the Hobbit, and whether or not they actually are Dragons is questionable.

“Tell me what you want done, and I will try it, if I have to walk from here to the East of East and fight the wild Were-worms in the Last Desert.” The Hobbit - An Unexpected Party

This is everything I can think of right now, will come back and edit though

A drawing of Glaurung done by Tolkien 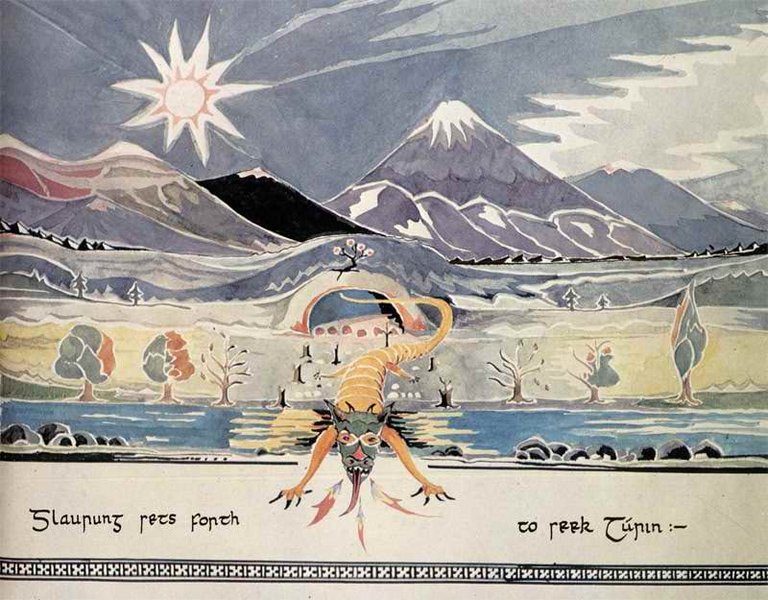 There were two general kinds, the Fire-drakes and Cold-drakes, as well as winged and unwinged dragons.

The first dragon encountered in the First age was Glaurung. Whether he was the father, in terms of breeding, or the first created is unclear. Other fire drakes are mentioned in the various battles of the first age in The Silmarillion. Glaurung is eventually slain by Turin, but not before he created considerable mischief. He was a speaking dragon. It is unclear if all fire drakes could speak.

Again after a hundred years Glaurung, the first of the Urulóki, the fire-drakes of the North, issued from Angband’s gates by night. ~The Silmarillion

During the last battle in The Silmarillion, when Morgoth was defeated by the intervention of the Valar into Middle Earth, Earendil the Mariner with the Silmaril on his brow fought and defeated Ancalagon the Black, a winged dragon. The battle took place in the sky.

In later ages other dragons are mentioned, though I can't find a reference for a dragon in the Second Age.

In the third age, a cold-drake slew a famous dwarven King, as noted in the first appendix of the Lord of the Rings (Return of the King).

At last Dáin I, together with Frór his second son, was slain at the doors of his hall by a great cold-drake.

A hero of the people who later became the Rohirrim slew a dragon.

Of his son, Fram, they tell that he slew Scatha, the great dragon of Ered Mithrin, and the land had peace from the long-worms afterwards.” (Appendix A, RoTK)

In The Hobbit, Smaug the flying, fire breathing dragon is eventually slain and his horde looted, although some years before he had destroyed both Dale and the dwarven kingdom in Erebor. He is called "Smaug the Golden" by Bilbo at one point.

Gandalf, in the Lord of the Rings, mentions that of the seven rings of the dwarven kings, some were devoured by dragons but the details are sketchy regarding which ones and where.

Not the answer you're looking for? Browse other questions tagged tolkiens-legendarium dragons middle-earth or ask your own question.