This is another one of those cases where I started searching for a book, and found where I'd helped someone else out in the process of fleshing out details for the question. I could have sworn someone asked after it on this site, but it looks like it was instead on TVTropes's YKTS (although I can't get it to actually show up on the site anymore, so this is the Google cache).

The book involved a disabled boy in elementary school, with something like muscular dystrophy or cerebral palsy where he has difficulty moving with strength and/or precision. I read it somewhere in the 1990s in Ashland, KY. I don't remember any particular date range, but probably between 1988 and 1994 because that would put me in elementary school and I have this memory of the school library tied to it. The boy had a dragon of ambiguous reality that occasionally seems to help him out, particularly against bullies. There was a scene involving him helping a girl he thought was cute onto a ladder or something where he realized he could see up her skirt, but didn't say anything because she would think he was doing it intentionally. There was a scene involving a hide-out in the woods with the bullies. I want to say there was a scene where he and/or the girl were trapped there by the bullies.

I don't remember how the book ends other than that he was still disabled at the end of the book (no magic cure) and he still wasn't certain if the dragon really existed or if it was just his imagination and coincidence.

The book in question was Eddie's Blue-Winged Dragon. 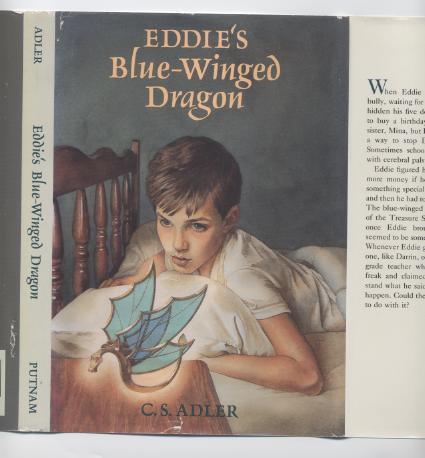 With a bully like Darrin after him and a sixth grade teacher who couldn't understand his speech, school was hard for a kid with cerebral palsy like Eddie.

Besides, Eddie needed to find a gift for his little sister's sixth birthday.
There in the Treasure Shop, Eddie and his friend Gary discovered a great gift -- a blue winged dragon. But the dragon scared Eddie's little sister so much she didn't want it.

Eddie kept the dragon, but strang tings [sic] began to happen. Could the dragon be going after Eddie's enemies?

There are some more details in this review, including a mention of the bully's hideout burning down.

.... The ""magic"" escalates until Eddie believes he has caused a fire to burn down the woods where Darrin has his hide-out. When Darrin admits that he was careless with fire, Eddie is relieved of his sense of responsibility; and when he wins an essay contest by popular acclaim, having dared to read his essay before the entire school, Eddie learns that he has been more accepted than he knew....

I found the book by doing a search for book dragon cerebral palsy.

Not the answer you're looking for? Browse other questions tagged story-identification young-adult dragons or ask your own question.

18
What novel was set in a dystopian future and featured a boy searching for his missing father?
15
Story about a dragon hatching and a bullied protagonist
3
2000s novel with dragons and a boy with a book
11
Children's Book Involving Witches, Flying Cars, and a Mysterious man who sacrifices himself for the protagonist
11
Story with a boy who has to conjure apples, and learns magic with the Socratic method?
5
Book about a girl with magic and a boy a with curse
3
Book about a boy who moves to Europe, climbs a wall with one of his friends (who turns out to be a troll), and finds dragon eggs