Why does Bilbo try to hide his job when presenting the contract as evidence of his identity?

In The Hobbit: An Unexpected Journey, we see the contract for employment of Bilbo Baggins as a Burglar with the company of Thorin Oakenshield.

At the end of the contract, the area designated for signatures looks like the following: 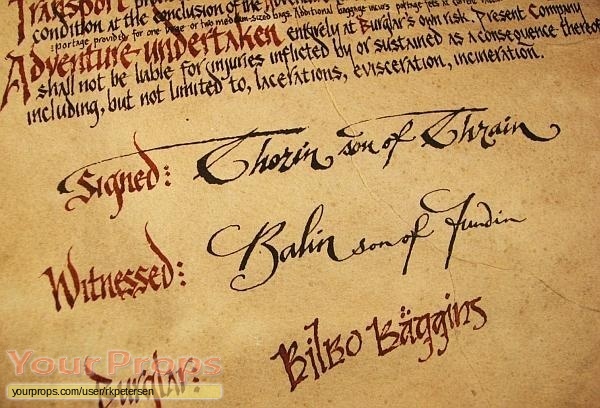 So where Bilbo signs the contract, it is clearly mentioned that he was signing as The Burglar. Not only this, he's referred to as Burglar in the entirety of the contract .

Yet, in The Hobbit: Battle of the Five Armies, when Bilbo is asked to show any official document with his name or signatures on it to prove his identity, we see this:

[Auctioneer:] “This is most irregular. Excuse me, it’s been more than thirteen months since the disappearance. If you are, in fact, Bilbo Baggins and undeceased - can you prove it?”

[Auctioneer:] “Oh, well, something official with your name on it would suffice.”

[Bilbo is, justifiably, quite flustered.]

[He pulls out the contract that he’d signed to join Thorin’s company and looks through it.]

[He shows it to the auctioneer.]

[Auctioneer:] “Uh, certainly seems to be in order. Yes, seems there can be no doubt.”

So if it was evident by the signature and the contract that Bilbo was working as a Burglar, why would he bother trying to hide it? If he was ashamed of being seen as a professional burglar, how does not saying it out loud help when the truth is mentioned everywhere on the contract? He points out his signature, so assuming that the contract required signature only at the end of the contract, it should have been obvious to the auctioneer that he was employed as a burglar, given that the caption next to the signature says "Burglar".

As pointed out by Bellerophon, he may have been trying to avoid saying it in front of everyone present at the Auction. But why would he expect the Auctioneer not to gossip about it? In a small community like Hobbiton, I'd expect such a thing to be fairly common, gossiping that is especially when the gossiping material is so uncommon. "Oi, did you hear about young mister Baggins? 'E went off working as a Burglar, he did. Saw it with me own eyes."

NOTE: While I have watched the Peter Jackson movies an embarrassingly high number of times, I haven't read the books.

Bilbo Baggins is (or at least was) a respected member of the Hobbiton community. He knows that by going on an adventure he has already lost some degree of respect in his community and probably does not want to lose any more by revealing he was a professional burglar.

Ideally no-one would ever find out but he has no choice but to tell the auctioneer in order to regain his house. Given that he is in a public place, saying out loud what he was employed as would mean the whole of the Shire would know within a week or two whereas showing the auctioneer meant that only one Hobbit would know and, hopefully, the auctioneer is discreet enough to keep Bilbo's secret.

We do not know how discreet the auctioneer is. I suspect, given this is the Shire, that he will gossip and the gossip will spread quickly. Certainly by the start of LotR everyone knows Bilbo has got a load of gold in his house and may well know of his past employment. I doubt Bilbo expects the auctioneer to not gossip but is telling him anyway as he has no other choice.

There is no auctioneer in the book. Bilbo arrives halfway during the auction. He's not asked for a legal document, but "the legal bother lasted for years" and "it was a long time before he was admitted to be alive again".

(...) He had arrived back in the middle of an auction! There was a large notice in black and red hung on the gate, stating that on June the Twenty-second Messrs Grubb, Grubb, and Burrowes would sell by auction the effects of the late Bilbo Baggins Esquire, of Bag-End, Underhill, Hobbiton. Sale to commence at ten o'clock sharp. It was now nearly lunchtime, and most of the things had already been sold, for various prices from next to nothing to old songs (as is not unusual at auctions). Bilbo's cousins the Sackville–Bagginses were, in fact, busy measuring his rooms to see if their own furniture would fit. In short Bilbo was "Presumed Dead", and not everybody that said so was sorry to find the presumption wrong.
The return of Mr. Bilbo Baggins created quite a disturbance, both under the Hill and over the Hill, and across the Water; it was a great deal more than a nine days' wonder. The legal bother, indeed, lasted for years. It was quite a long time before Mr. Baggins was in fact admitted to be alive again. The people who had got specially good bargains at the Sale took a deal of convincing; and in the end to save time Bilbo had to buy back quite a lot of his own furniture. (...)

Actually, only the Sackville–Bagginses refused to recognise Bilbo.

(...) Many of his silver spoons mysteriously disappeared and were never accounted for. Personally he suspected the Sackville–Bagginses. On their side they never admitted that the returned Baggins was genuine, and they were not on friendly terms with Bilbo ever after. They really had wanted to live in his nice hobbit-hole so very much.

Also, there isn't a contract signed by Bilbo in the book. Instead there's a note on his mantelpiece, reading:

"Thorin and Company to Burglar Bilbo greeting! For your hospitality our sincerest thanks, and for your offer of professional assistance our grateful acceptance. Terms: cash on delivery, up to and not exceeding one fourteenth of total profits (if any); all travelling expenses guaranteed in any event; funeral expenses to be defrayed by us or our representatives, if occasion arises and the matter is not otherwise arranged for.
"Thinking it unnecessary to disturb your esteemed repose, we have proceeded in advance to make requisite preparations, and shall await your respected person at the Green Dragon Inn, Bywater, at 11 a.m. sharp. Trusting that you will be punctual,
"We have the honour to remain
"Yours deeply
"Thorin & Co."

The auctioner may check only the parts mandatory for his decision; whether the hobbit in front of him is Bilbo or is not. He may only check Thorin's, Balin's and Bilbo's signatures and the title of the document (Adventure contract). He may skip any note that Bilbo was contracted as an burglar.

If Bilbo would say it out loud, he would be sure anyone in vocal area would know, he was contracted as a burglar. When he avoided it by mumbling it away he kept his chance that the fact would be left unnoticed at all or noticed only by the auctioner.

There was no gain for revealing it and pain for sure.

Not the answer you're looking for? Browse other questions tagged tolkiens-legendarium the-hobbit adaptation-comparison or ask your own question.

22
Why does Frodo appear in Peter Jackson's The Hobbit?
14
Why does Bilbo change?
65
Why didn't Sauron find Bilbo when he put on the ring like Frodo?
14
When did Bilbo leave the Shire for Erebor?
29
When and why did Bilbo write a song about Aragorn?
3
Why did Bilbo hide the ring?
8
Why does Thorin tell Bilbo that he has "keen eyes"?
6
Why does Tolkien make Thorin to be older than Balin, only to present Balin in the Hobbit as "very old-looking"?