Can Pokemon die inside their Pokeballs?

How immune to death are Pokemon while they are inside their Pokeballs? Status effects like poison still hurt them while they're put away, to the extent of them being knocked out. So we can assume they're not safe from whatever ailment they take with them. But what if their ball gets smashed by a boulder or they get lost at sea? Will they be crushed/starve to death?

Can a Pokemon die while being stored in their Pokeball, whether from an inside or outside stimulus?

According to the anime, Pokémon can survive for years in a Pokéball, and are fully conscious. Pokéballs are also a place where they can rest. However, Ash was once concerned that his Pokémon would freeze inside their Pokéballs. This indicates that while Pokéballs seem to be able to sustain Pokémon for a considerable amount of time, they can still risk freezing to death.

The video games do not explore this, so we're going to have to rely on the anime.

In "Snow Way Out!" (which was aired as an unnumbered special episode, since it was rescheduled due to the Porygon incident), Ash was separated from Misty and Brock in the snowy mountains. After building a snow cavern, the Pokémon try to stay warm around Charmander's tail, but he is clearly tiring out from keeping it strong enough to keep everyone warm. Ash wants him to rest in his Pokéball.

Ash: Your flame's all used up! Come on, get back in your Pokéball and rest!

Charmander: (nodding his head no, but sounding exhausted) Char…maaan!

Ash: Come on! You have to conserve your energy! (Ash recalls Charmander) Come to think of it, the Pokéballs ought to be pretty warm. (To Squirtle, Bulbasaur, and Pikachu) Okay, you're going into your Pokéballs!

(The Pokémon voice their disagreement, not wanting to leave Ash alone)

You have to! It's a lot warmer inside the Pokéballs than out here in the cold. (Recalls Squirtle and Bulbasaur)

Pikachu refuses to go in his Pokéball (which he hasn't been in since the first episode). They huddle for warmth for some time before Ash looks at the Pokéballs on his belt.

I hope my Pokémon are warm enough. (He wraps the Pokéballs into his outer shirt) 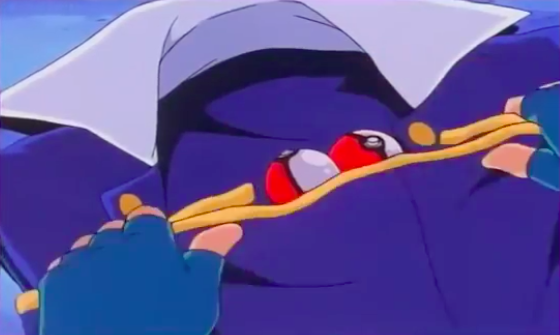 So it's clear that although Ash believed the Pokéballs would be a place they could rest, and that it would be warmer inside, that they would still be in danger from the cold weather.

In "Two Degrees of Separation" (Diamond & Pearl Episode 2), James returns to ones of his childhood homes and finds a box containing his first bottlecap collection (Meowth says that whatever is inside is older than him). James is surprised to find that it also contains a Pokéball for the Carnivine he played with as a child, which he had lost. He sends out Carnivine expecting him to be just fine, and he is. It's very unlikely that anybody let Carnivine out since James lost it.

Similarly, "Sandshrew's Locker!" (Diamond & Pearl Episode 47) involved Ash and his friends helping out a girl named Mira recover her Sandshrew, whose Pokéball is underwater. She lived in the town until a nearby dam broke and flooded it. The team scuba dives and goes relatively deep before they find it. So the Pokéball seems to also be waterproof and resistant to pressure. It's a bit unclear how long the Pokéball was underwater, but I'm going to guess that it was several weeks minimum, given that the townspeople are long gone and Mira has resorted to tricking passerby to help her.

Also, it's very clear that Pokémon do not go into stasis or get transformed into data when they go into Pokéballs. They seem to have some awareness of the outside world and can come out of their Pokéballs at appropriate times (we see this most often with Team Rocket's Wobbafett coming out to say his line in their motto, but also Misty's Psyduck when she intends to call out another Pokémon). Also, the audience occasionally sees a Pokémon sitting inside of their Pokéballs, fully conscious, such as Iris' Dragonite.

How can a Pokémon survive for years in a Pokéball without food, water, air, or exercise, yet still be conscious of the outside world? Never explained, unfortunately.

The anime hardly ever touches death (and often softens references to it with phrases like "be destroyed" or "leave this world"). Heck Lavender Tower, which is a Pokémon graveyard in the games, is just a haunted house containing three ghost Pokémon who act like the Three Stooges.

The only episode that I'm aware has addressed death is the 2017 Sun & Moon episode "One Journey Ends, Another Begins...". However, the Stoutland that died was a wild Pokémon, so it doesn't provide any insight into what happens to a captured Pokémon that dies.

Given that we've never seen a captured Pokémon die inside or outside of a Pokéball, we don't know for sure if they can die inside. The closest we got is Ash fearing that his Pokémon would freeze to death while in their Pokéballs, which suggests that it is a risk.

In the episode Snow Way Out! where Ash was stuck in a blizzard and was trapped in a cave due to it, he told his Pokemon, including Pikachu, to go into their pokeballs to stay safe. I think that would be reason enough to say Pokemon can't die in a pokeball.

From an Interview with Junichi Masuda, producer on Sun and Moon, we get the information that

[I think] it’s safe to say that it’s very comfortable inside inside of a Pokeball, it’s a very comfortable environment [...] Maybe the equivalent of a high-end suite room in a fancy hotel.”

Wich, to me, doesn't sound like a place that can threaten your life.

^this may be treated as an addition to Thunderforge's answer.

There is a Clever Theory that eventually the energy signature of a Pokemon can degrade and become corrupted, and that is where MISSINGNO come from

51
Why do Pokemon obey their trainers?
12
How much heat can a Fire Pokemon withstand?
3
Why don't more trainers (nick)name their Pokemon?
74
Are Pokemon farmed and eaten?
10
Can Pokeballs ever be reused?
4
Are Pokemon tied to their Pokeballs?
9
Why are Pokeballs restricted to containing Pokemon?
6
How do Pokemon trainers collect their winnings?
7
Are humans in Pokemon as strong as Pokemon or as weak as humans?
0
Whats the difference between a Pokemon Trainer and a Pokemon Hunter?