Story is a YA book, involving a high-school super soldier.

Facts I recall from the story:

Looking this up just for nostalgia's sake, IIRC it wasn't that good. Originally read it in Dutch in the early 2000's, but I don't recall a precise date.

It's possible that you read one of the books in Marilyn Kaye's Replica series.

"Replica" is a children's science fiction series about Amy Candler, a young teenager who discovers she is one of thirteen cloned girls who have been genetically modified to have superhuman abilities. She was created in the government-funded Project Crescent, and was kidnapped and adopted by one of the scientists after a change of heart. Throughout the series Amy struggles to live a normal life as the mysterious Organisation tries to use her and the other Project Crescent clones to create a master race and take over the world. Amy also seeks to help the other clones in the project, and encounters a number of other children and teenagers with genetic modifications or supernatural powers.

Amy is indeed a clone, the result of a super-soldier project. She essentially has peak human capabilities including extreme strength and speed, and the ability to pick up skills rapidly. In particular, Amy's abilities develop in the first book in her practice of gymnastics. As per your description, her mother rescued her when the facility burned out (implied to be sabotage whether by researchers, rivals, or Project Crescent itself) and Amy finds that there are more girls like her out there. Within the first two books, she meets one who is a French ballerina and one who is a minor movie star. She does have non-powered friends in her school.

Unfortunately, none of the books I read match up to the scenes you mention, or some of the details. The girls do not possess specific flaws, and the primary protagonist, Amy, is not hard of hearing. One possible plot match, the fourth book, Perfect Girls, does described Amy and several of the other clones being captured. 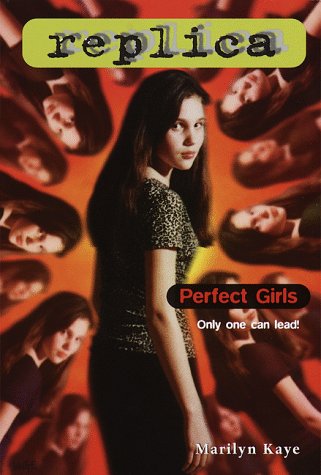 Amy thinks she has won the trip of a lifetime to New York, but she soon discovers this is a front to capture and test herself and seven other clones. Amy eventually escapes, but no-one believes her story.

I acquired a copy from the library. Indeed, she meets many of the clones. It's her friend at school, Tanya (her other friend being Eric, Tanya's older brother) who's allergic to nickel, and indeed they coat the pendants in nail polish to mute the microphones. It's not lock-picking skills, but the ability to look at a set of keys and realize which one will fit the lock. The one part that does not match is the girls being "defective" although they do all show different talents. The first chapter mentions that they'd heard about lip reading in an earlier assembly at the school from a deaf woman, and one of the captors is deaf, but none of the girls are, including the protagonist. I think that might be you conflating another book into it.

15
40-yr-old SFF Novel: planet only half visible, metal doesn't work in one half
15
Need help finding a specific Scifi trilogy, 2000-2004
13
Intelligent cells taking over the world
18
Barbarian captured by more advanced humans, physically enhanced, returned to people for a mission?
8
What is the name of this science fiction novel involving an alternative history?
6
A book where a man inhabits the body of a dying man and befriends a telepathic cat
7
Scifi dystopian like audio book in which a ship crashes into Earth and becomes Godlike
10
Name of webcomic with no dialogue, set in a flat world inside an armillary sphere?