What is the importance of Galadriel giving a new bow to Legolas?

In Fellowship of the Ring, at the Lothlorien - the place of Galadriel - the Fellowship received gifts from Galadriel. Legolas received the Bow of Galadrim replacing his current bow, the Bow of Mirkwood. Now what is the importance of giving a new bow to Legolas? Since it is the same weapon, and the only difference is the color of the bow.

The Bow of Mirkwood 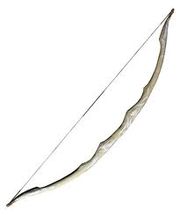 The Bow of Galadhrim

As you can see it is the same use of weapon.The only difference is the color.

Legolas' Mirkwood bow was relatively short, and not especially powerful or long-ranged. From Fellowship:

Arrows fell among them. One struck Frodo and sprang back. Another pierced Gandalf's hat and stuck there like a black feather

Legolas turned and set an arrow to the string, though it was a long shot for his small bow.

We can see here that orc bows were powerful and accurate enough to reach the Fellowship at ranges where Legolas' bow would apparently struggle. Later, we get a description of the bow Galadriel gives him:

To Legolas, she gave a bow such as the Galadhrim used, longer and stouter than the bows of Mirkwood, and strung with a string of elf-hair. With it went a quiver of arrows.

A longer, stouter bow is almost by definition going to be more powerful than the short-ranged affair he had been using up to that point. It's not explicit that there was some form of 'magic' in the bow, but given what we know about other elven artefacts it seems likely; in which case, what with the Galadhrim being closer to the elven power of old, one can imagine it has greater virtues than the relatively mundane weapon from Mirkwood.

The difference essentially is like urban combat present day in real war calls for a smaller and more easily maneuvered firearm such as an AR-15, whereas a true ranged warfare artist not entwined in the urban structures (or the dense mirkwoods) would use a larger more powerful firearm such as a 308 Lapua Magnum

Not the answer you're looking for? Browse other questions tagged tolkiens-legendarium movie the-fellowship-of-the-ring or ask your own question.

36
Why Did Gimli Want Galadriel's Hair?
10
How did Bilbo Baggins find the One Ring exactly?
20
Why did the Fellowship scatter so chaotically at Parth Galen?
8
Do Tolkien's works describe either Galadriel or Arwen as being more beautiful than the other?
9
Was it a good idea for Galadriel to give Legolas an unfamiliar bow?
9
What was the benefit of the belts given by Galadriel to 3 Fellowship members?
2
What's so special about the name "Elessar"?
10
Why is there so little concern for destroying the Ring?
28
How did Aragorn, Legolas, and Gimli know what Uruk-hai were?