This question was originally posted in Movies Stackexchange, but no one was able to successfully identify the movie/show there so I thought I'd try it here.

I remember watching a small part of a show (movie or TV show I don't know) a long time ago. It's possibly from the 80's or 90's. In the scene I saw, some military people came across what looked like a small periscope (maybe a foot or two tall?) with a blue end embedded in the ground, spinning around.

Later, this periscope must've come out of the ground, because two alien spaceships that had this periscope on it were attacking the military people. The spaceships were somewhat saucer-like. They had more "traditional" red weapons that when fired would explode things, and then the blue periscope would also fire and anything it hit would freeze and then disappear over the course of a few seconds.

What is this movie/show?

I've included a picture of the spaceships as best as I can remember them (front and side view), seen below. The spaceships were gray except for the red weapons on the side and the blue weapon mounted on the periscope-looking thing.

Edit: It appears I misremembered the exact height of the periscope and the colors of the weapons. Either that, or there is another film very similar to the 1953 War of the Worlds out there that remains unidentified :). 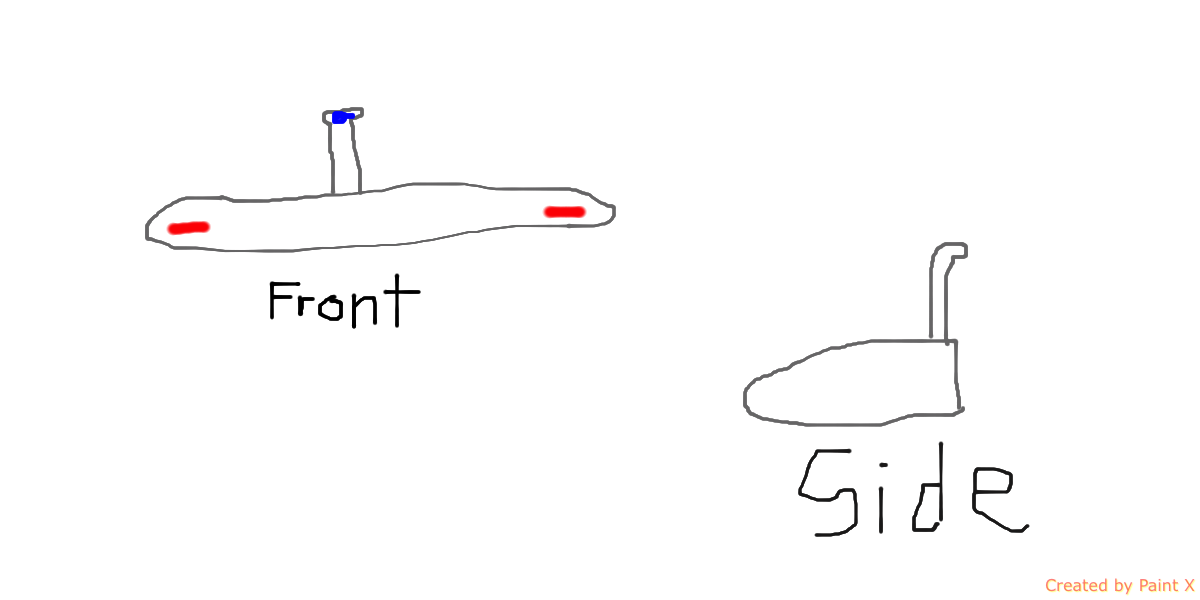 This does seem like the 1953 version of War of the Worlds.

The saucers have a red periscope, not a blue one, and the saucers and sides are green, so it's not an exact match to what you're describing. Usually they're firing red "heat rays" from their periscope, but I did find footage where they are firing different colored weapons from their sides which does disintegrate things in a slow fade effect. Here's a youtube clip of a battle with the "saucers" (they're supposed to be tripods, which is what the fighting machines in the original are described as, but they made the legs invisible and just throw up sparks to show where they're "standing" (thank you @Werrf)).

The saucers from War of the Worlds were modified and reused in Robinson Crusoe on Mars 1964. See the trailor.

Why do the Martian aggressors in Robinson Crusoe on Mars look the same as those in War of the Worlds?3

Thus you might be remembering scenes from both movies. Or else spaceships in a third movie designed to look like those the saucers.

9
Why do the Martian aggressors in Robinson Crusoe on Mars look the same as those in War of the Worlds?

11
Pre-90s anime with a red-haired man in an outer space war shot at the ending
5
Movie identification:scientists study a flying saucer and try to make it fly (70s or early 80s)
6
Title of a comic read in late 80s featuring an ant-like insect alien race with wasp-like spaceships
11
Looking for a late 1950s to early 1960s movie or TV show with some similarities to "The Zanti Misfits"
1
Screenshot image from a movie with a blue alien and spaceship
5
Floating transparent sphere beaming something into a crater? (Space Force! theme song video)
8
Young adult fantasy trilogy about a boy with healing powers and a girl who is really a dragon
3
Superhero cartoon where a blue-and-white alien combines with the hero