Novel about a chemist killed by alien spacecraft then revived

I'm trying to find out the author and title of a book that was published some time after 2000 , possibly by Baen.

A chemist is on a spaceship whose mission is to observe but not interfere. He is accidentally "killed" in a midair collision with an alien spacecraft. He is given a choice: die, or be relocated to another world occupied by humans living with approximately 19th century technology.

He is modified via nano or biotechnology which enhanced his healing and was transmitted to his intimate partners and children giving them improved wound healing. His knowledge of chemistry and other science topics sparked a industrial revolution in his new home. This attracted the attention of the local ruler whose nation's survival is threatened by the imperial ambitions of one of its neighbors.

I quite enjoyed the book and hope to read a sequel if it exists. 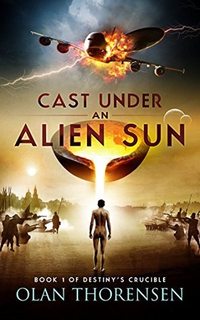 Joe Colsco boarded a flight from San Francisco to Chicago to attend a national chemistry meeting. He would never set foot on Earth again.

On planet Anyar, Joe is found unconscious on a beach of a large island inhabited by humans where the level of technology is similar to Earth circa 1700. He awakes amidst strangers speaking an unintelligible language, and struggles to accept losing his previous life and finding a place in a society with different customs, needing a way to support himself, and not knowing a single soul. His worry about finding a place is assuaged when he finds ways to apply his knowledge of chemistry—as long as he is circumspect in introducing new knowledge not too far in advance of the planet’s technology and being labelled a demon.

Not the answer you're looking for? Browse other questions tagged story-identification aliens soft-sci-fi alien-abduction or ask your own question.