Can anyone help me identify a story about kids with silver blood?

I vaguely remember reading a young-adult book about a group of kids. The kids turned out to be aliens, and the one identifying mark they had was that their blood was silver (or something else)? I think the kids also have powers. I vaguely remember a cover that had a gaping mouth and something that looked like they were supposed to be sound waves coming from it.

Was it the Mindwarp series by Chris Archer? 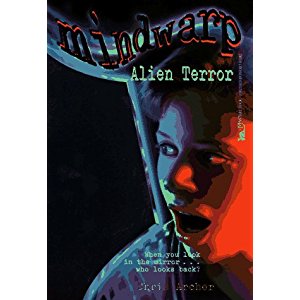 The main characters all have silver blood and super-powers, which manifest on their 13 birthday and lead to entertaining hijinks.

Is it the The Silver Sequence by Cliff McNish?

The Silver Child is about a group of children in an abandoned ship building site called Coldharbour, given special talents dubbed by the young protagonists as "gifts" to fight a force known to them only as "The Roar". The novel initially follows an infant called Milo from his beginnings as an ordinary boy to his transformation into the Silver Child, an enormous entity of childlike proportions with wings and brightly shining skin - fated to act as the first line of defence against the Roar.

Milo first begins to change at his house. He is struck by a near insatiable hunger, eating all the food at Sunday lunch and losing all his hair. He frightens his mother and sister Jenny by finishing a chicken, a bowl of potatoes, bread and a bowl of corn. Shortly afterwards, he runs away from home drawn towards Coldharbour by inexplicable urges. Milo's skin rots away with no pain, revealing a layer of glowing, gold skin. However, as his transformation proceeds, a layer of even brighter silver is revealed about his wrist - upon the discovery of the inner layer, Milo's transformation soon becomes excruciatingly painful.

3
Kids with superpowers, antagonists with metallic eyes
10
Young Adult Science Fiction Story Identification: Arm Regeneration in a Nuclear Dystopia
8
Novel about a teenage boy who could understand all languages
4
Young adult book series about aliens or hybrids with silver blood
5
YA series about children with powers from their alien parents
2
Trying to recall old YA Sci-Fi series similar to Animorphs

9
Collection of youth short stories about aliens 1990-1994ish
13
Earth terraformed to a cube, then turned back to a globe?
14
Help me identify this B-movie about plant-like aliens that crash land
7
Alien embryos fall into a pond, turn into humans
4
80s TV show about kids with psychic powers saving the world from shapeshifting aliens
2
Trying to recall old YA Sci-Fi series similar to Animorphs
4
2005-2010s animated TV show featuring different colored monkeys with super powers