Can you help identify a book about kids getting pulled into a fantasy world? [duplicate]

There's a specific book I have been trying to remember/find for about 15 years, but any book in the same "category" is a welcome answer.

The specific book I'm trying to find involves a bunch of kids playing a role-playing game, with incredibly detailed figurines. They get pulled into the world of the role playing game, where they have to fight an villain who looks just like the Uncle of one of the kids playing the game. I believe the "main" character's avatar used a whip as his primary weapon.

The Chronicles of Narnia series is a great example of a story about normal kids being pulled into another world for epic adventures.

Alice in Wonderland is another.

The Unicorn Chronicles is a series I read as a kid that involves a girl falling from a great height, and instead of smacking onto the pavement below, she ends up in a dimension where there are unicorns, thanks to an amulet her grandmother sends her.

I believe the book is called The Twilight Realm. It has the uncle making miniatures, the kids going into the other world to play their characters, and I believe one of them does indeed have a whip. 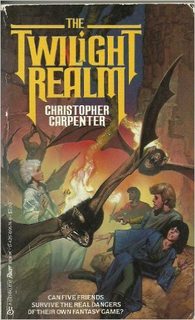 While not the title you're searching for, Jumanji is a similar work. From Wikipedia:

Jumanji is the title of a 1981 children's illustrated short story and fantasy story written and illustrated by the American author Chris Van Allsburg. ...

Two siblings, Judy and Peter, are bored one afternoon while their parents are out at the opera. They decide to go to the park across the street, where they find a board game, "Jumanji: A Jungle Adventure Game", under a tree. They decide to take it home and play. The instructions tell each player to choose a piece and place it at the start in the deepest jungle, then roll the dice and move along the path and read the message on the square they land on. The first player to reach the end and call out "Jumanji" wins. It also specifically says that once a game has started, it will not end until someone wins.

Peter starts the game by rolling a seven. This seems fairly unexciting, until he turns around and sees a lion on the piano, which tries to attack him. The lion, luckily, is locked in a room. At this point, Peter wants to quit now, but Judy reminds him that according to the instructions, the lion will only disappear when the game is done. Judy rolls an eight, and releases monkeys which mess up the kitchen. Peter then causes a monsoon that floods the house. Judy's next roll causes a guide to get lost. She tries to help the guide, who's looking at a map for directions, but the guide ignores her. When Peter takes his next turn, he's bitten by a tsetse fly, causing him to contract sleeping sickness. Judy rolls the dice and creates a Rhinoceros stampede that, although waking Peter up, destroys the house. Peter's next roll releases a deadly python. Judy's next roll has her land on a blank space, but when Peter takes the dice back, he causes a volcano to erupt. Molten lava pours from the fireplace opening, and fills the room with steam when it hits the water on the floor. Judy can finish the game if she rolls a twelve, which she does. Judy's piece reaches the end, and she yells out "Jumanji". A mist surrounds the house, and when it has faded, the house is back to normal. Judy and Peter put the game away and return it to the tree under which they originally found it. After their parents return home, Judy and Peter see Danny and Walter, two of the parents' friends' children who are known for not reading directions, take the game.

While it may not be what you are looking for, the Guardians of the Flame series of books by Joel Rosenberg focuses on a similar sort of story line. From wikipedia:

Have you ever played the game Dungeons and Dragons? If you did, did you ever have a favorite character that you would dream about becoming, and living their life in the gaming world they live in? What would you do if that really happened to you?

That's the basic premise of the books (there are 10 books in the series).

Madeleine L'Engle's A Wrinkle in Time is a classic kids book about dimensional travel.

a bunch of kids playing a role-playing game, with incredibly detailed figurines. They get pulled into the world of the role playing game

"Quag Keep", by Andre Norton, exactly fits this much of what you described. Not so much the rest of your description, though -- no uncle, no whip.

The characters are roleplayers who get some new miniature figures that are amazingly well-crafted, and while examining them, they get pulled into the fantasy world. Inside the fantasy world, their characters find themselves wearing bracelets with dice on them, and the dice spin whenever something is about to happen (random monster encounter, skill roll, etc.)

Not the one you detail but answers to the specific wording of your question:

Everworld is a great series about a group of teenagers getting pulled into a different dimension where the gods of old have gone to.

Two possibilities, both by Ray Bradbury:

Not the one you're looking for, but Diana Wynne Jones wrote "The Homeward Bounders" which is loosely based around D&D games. Characters are pulled out of their worlds to the boundaries, and meet up with other people also on the boundaries.

"When Jamie unwittingly discovers the scary, dark-cloaked Them playing games with human lives, he is cast out to the boundaries of the worlds. Clinging to Their promise that if he can get Home he is free, he becomes the unwilling Random Factor in an endless game of chance."

You might want to take a look at the "young adult fiction" Gone series by Michael Grant.

Instead of being pulled into a "fantasy" world, the child inhabitants of the town of Perdido suddenly become isolated from the rest of the world by a seemingly impervious bubble. Anyone over the age of 15 years mysteriously disappears leaving no adult supervision and the child population to fend for itself.

Some very subtle changes start to happen within this isolated shell, some of the children discover they have new found powers such as being able to move objects through telekinesis, or shoot bolts of energy from their hands. Nature in the world itself begins to alter, lizards grow wings and can fly, the local hyena population submit to the control of an evil force residing down a local gold mine, cats can "warp" themselves from one location to another.

I'm not a huge reader of this type of fiction, but bought the books to get our oldest lad (12) more interested in reading. He couldn't put them down so I decided to have a read as well and the first two that I've read (Gone and Hunger) are quite enjoyable.

Not that this should be at all important, don't be put off by the covers used in the first publication runs. The latest paperbacks and hardbacks have way better artwork where you wouldn't feel self-concious about pulling the book out of your bag to read in a public place.

Just to help with the big list that this question is giving rise to: The Cat in the Hat, by Dr. Seuss:)

Your talk of figurines reminded me of The Indian in the Cupboard series by Lynne Reid Banks.

Children playing with their "figurines" (aka action figures) discover a "magic cupboard" that makes them come to life, and discover that they're models from another time/universe. In the series, kids can go back into the lives of their action figures and vice versa. Very good read for young adults!

Any chance it's Interstellar Pig? 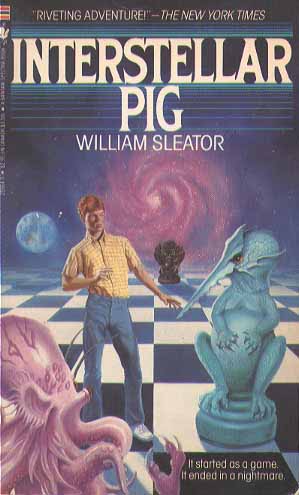 7
Book about kids playing a D&D-like game that invades the normal world
5
Looking for 90s/2000s teen fantasy book about kids pulled into an RPG
3
Y.A. 1980s book about kids pulled into computer game
10
Boy goes to magical boarding school
5
Sci-fi movie about a video game with enemies on motorcycles
8
Book about a boy that enters a medieval fantasy PC computer game
5
Book where a boy finds out that a building in his neighbourhood is the inspiration for a game that he is obsessed with
7
Book series with a game designer getting shot by a crazed fan and being forced to be an NPC in a game session. Real world artifacts show up in game
8
Novel involving a powerful spellcaster trapped at the bottom of a well or pit. The magic of the pit kept them from casting spells